A Retired Brigadier General's Lessons from the War in Afghanistan 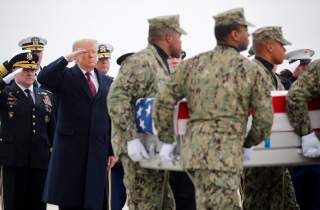 For the last several months, U.S. special representative Zalmay Khalilzad has been deeply involved in a negotiation with the Taliban—an effort that may or may not lead to a comprehensive political resolution of the seventeen-year-long Afghan conflict. For the sake of peace in Afghanistan, we should all hope that Khalilzad—a man of eminent experience who has worked on the Afghan portfolio for decades—can pull a rabbit out of his hat and close the book on this latest bloody chapter in Afghanistan’s history.

But while those of us on the outside wait to see whether peace negotiations with the Taliban produce a lasting and positive result, it’s important for America’s national-security insiders to look back at where we are; whether what we’ve done works; and what lessons we should extrapolate in order to avoid similar endless wars in the future.

The U.S. war in Afghanistan started off in the most noblest of ways. The September 11, 2001, terrorist attacks in New York, Washington, DC and rural Pennsylvania shocked the conscience of the entire world. If there was ever an instance in history of a justifiable military operation, the U.S. military campaign against Al Qaeda and the Taliban in Afghanistan fit the bill perfectly. Operation Enduring Freedom, planned and executed with a specific and clear mission—eliminating Al Qaeda’s base of operations—was a classic case of self-defense. The U.S. military succeeded in this objective in a matter of months. By the winter of 2002, Osama bin Laden was on the run, his network was degraded, and the same Taliban officials that ruled Kabul with an iron-first were now running for their lives, hoping to avoid capture.

Seventeen years and five months later, fourteen thousand U.S. troops remain enmeshed in a war in Afghanistan with no end in sight. If anything, the battlefield geometry has gotten worse. The Taliban have long proven themselves to be a resilient organization and indeed an indigenous part of the Afghan social fabric. This fact was evident in the Special Inspector General for Afghanistan’s latest quarterly report, which depicted an insurgency contesting more Afghan territory than ever before. Meanwhile, a struggling Afghan government remains unable, or unwilling, to root out the systemic corruption within its ranks. Chairman of the Joint Chiefs Gen. Joe Dunford has referred to the Afghan conflict as an effective stalemate. Marine Lt. Gen. Kenneth McKenzie, the commander of Central Command, described the conflict in the same exact terms during his confirmation hearing last December.

The cost of the war to the United States in blood and treasure has been astronomical. Since 2002, $83 billion has been spent building and sustaining an Afghan national security force that remains overstretched and highly dependent on U.S. airpower and military advisors. Over $33 billion has been allocated for governance and development initiatives in a country that remains one of the most corrupt on the planet. Despite $8.9 billion in U.S.-funded counternarcotics programs, Afghanistan’s opium production over the last two years has more than doubled from when Washington first intervened in 2001. The U.S. obsession with winning Afghan hearts and minds in cities, towns, and hamlets across the country in order to strengthen the standing of the Afghan government among its constituents was naive, ineffective, and far more difficult than anticipated. In my experience with airlift and special operations missions in Afghanistan, I have yet to see any of these efforts succeed over the long-term. Washington’s inability to understand the most basic principle—at bottom, the Afghan people will ultimately do what is in their own self-interest, not what the United States tells them to do—has fallen on deaf ears.

The most significant cost to our country, however, has been the deaths and life-altering injuries sustained by the young men and women in uniform who were ordered (and continue to be ordered) to do the impossible. 2,419 U.S. servicemembers have been killed in Afghanistan, and tens of thousands of additional soldiers have been wounded—all in service of a strategy and policy which has merely perpetuated a stalemate.

The cumulative result is obvious for anyone who cares to recognize it: strategic muddle, an exhausted U.S. military bogged down with tasks best meant for other areas of the U.S. national-security apparatus, and a series of deployments seemingly without end. If doing the same thing over and over again is the literal definition of insanity, U.S. policymakers are well on their way to being committed.

When a policy is not working, it is incumbent upon the men and women who make and execute policy to learn and evolve. A refusal to do either out of stubbornness, fear, politics, or parochialism, is simply bad foreign-policy decisionmaking and the exact opposite of the leadership the American people are entitled to.

Instead of continuing the status quo, the Trump administration must settle on a military drawdown contingent on the military and political needs of our nation. U.S. leverage in Afghanistan is not contingent on the number of American troops deployed on Afghan soil, nor does it entirely depend on American military power alone. The United States will still retain enormous diplomatic, economic, and political leverage in Afghanistan, all of which can be used to great effect in order to ensure that U.S. interests in Afghanistan are protected and promoted.

Before the American people can be the beneficiaries of an improved U.S. foreign policy, Washington must undergo a broad and comprehensive review about what is, and is not, required for the country’s national defense. Priorities must be determined. Tough decisions about what is truly necessary to defend the American people and promote the interests of our nation can’t wait a moment longer. Every piece of ammunition in America’s extensive foreign-policy stockpile, from the dedication and knowledge of the U.S. diplomatic corps, to the power of our example, must be utilized in a coordinated total government effort.

Above all, U.S. officials can no longer operate on the assumption that every problem is the responsibility of the U.S. military. American foreign policy must exercise more judiciousness and restraint than the peripheral distractions of the last decade and a half. If military force is indeed required, the mission must be coherent and limited to a campaign plan that makes sense. It must be guided by realistic objectives that are militarily attainable. Anything less, is a disservice to U.S. national security, and especially to the men and women who serve in our armed forces.

Brig. Gen. Don Harvel (retired) is a former Deputy Commander of the Texas Air National Guard and a fellow at the American College of National Security Leaders.