Return of the Balance of Power 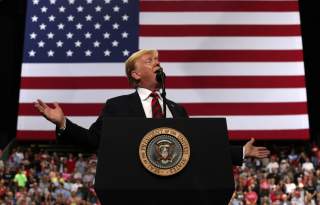 America is getting a third chance to strike the right balance between nationalism and globalism. The first chance dates back to its origins: as a new and vulnerable republic in a world of warring monarchs, it opted for nationalism, pursuing George Washington’s admonition “to steer clear of foreign entanglements.” Even as late as the 1930s, under the Neutrality Act, it refused to take sides in the momentous conflicts brewing in Europe and Asia. The second chance came after World War II. America turned to globalism, adopting Woodrow Wilson’s and Franklin Roosevelt’s internationalist strategy to transform the decentralized nation-state, balance of power system into the centralized global institutions of the United Nations (UN). When the Cold War paralyzed the UN, the United States became the superpower leader of a politically and economically integrated Western world. It assumed disproportionate burdens and nurtured the West to victory in the Cold War.

Now America is getting a third chance. It can’t make up its mind. Presidents Bill Clinton and George W. Bush perpetuated internationalist strategies to spread democracy and markets across Eastern Europe (NATO, EU), Asia (China in the WTO) and the Middle East (Middle East Democracy Initiative). When costs mounted, however, especially the costs of unending wars in Afghanistan and Iraq, Presidents Barack Obama and Donald Trump tacked back toward nationalism. Obama gave up the military playbook altogether, trusting in persistent diplomacy to reset relations with Iran, Russia and China. Trump put America’s interests first, sparking fears that nationalism would now destroy the liberal international order.

But the problem is neither nationalism nor globalism. In today’s world, the two are complementary. In the 1920s, when nationalism was authoritarian and the balance of power pernicious, nationalism was a destructive force. When nationalism became liberal and globalism built the democratic peace of the 1990s, nationalism became a more constructive foundation of global politics. Today, all major industrialized nations are democracies. In this kind of world, nationalism is not a destructive force but a democratic check on global elites and institutions. Globalism empowered financial, cultural and bureaucratic elites, and they act to this day largely outside democratic control. Not a single official in the European Union (EU), UN, WTO and IMF is directly elected or accountable to a popular vote.

Globalist leaders need to take a deep breath. National interests do come first in a globalized democratic world. They express the free will of local democratic peoples and institutions. Until global leaders are elected, nations provide the only direct manifestation of democracy in world affairs. And as long as these nations remain liberal, a globalized world has nothing to fear from them.

Nationalism comes in many forms—ethnic (blood), cultural (history), territorial (soil) and ideological (creedal)—but liberal nationalism requires that all of these forms respect republican virtues. These are individual rights, competing political parties rotating in power, independent judiciary and a free press. And, because it opposes authoritarian forms of nationalism, liberal does not always mean more interdependence and centralized institutions like the UN; it also means decentralized, independent national republics with robust private economies and citizens voting to choose and hold their leaders accountable.

In short, globalism means a federalist or conservative internationalism, one premised on limited global government that protects, not usurps, republican virtues. The threat to the liberal order comes not from political shifts within democratic societies from liberal to conservative parties; that’s the normal cycle of democratic politics. It comes from resurgent autocrats in Russia, China, North Korea and Iran who do not tolerate such political shifts. Authoritarianism, not nationalism, poses the real threat to the liberal order.

WHEN THE United States went isolationist in the 1920s, the world was a colossal mess. There were only a few democratic countries, principally the United States and Great Britain. Most other countries were either old monarchies in transition, such as Germany, or empires convulsed in revolution and war, such as Russia and Turkey (the Ottoman Empire). There were no security arrangements of any consequence, the League of Nations was a dead letter and most countries were more interested in regaining lost territory, colonies and pride than in preserving the status quo. The world economy grew substantially in the 1920s, but its foundations were weak. Global finance sprouted to fund reparations and fiscal deficits, while global trade sputtered and then collapsed in the 1930s.

In this period, American nationalism was not the problem. It had served the country well for more than a century, both by exploiting America’s geographic advantages and keeping the United States out of World War I until very late, incurring fewer casualties than other nations suffered. America’s power was not preeminent, as it would be in 1945, and the world was surly and unwilling to be led. No country had actually been defeated, just betrayed or “stabbed in the back”; many were just hankering for the next fight. Perhaps it was better to stay out of that kind of world. “Foreign influence,” George Washington had warned, “is one of the most baneful foes of republican government.”

World War II destroyed that dystopian world. Almost every nation suffered significant, if not total, destruction. Nationalism was spent, and the United States, unmarked by territorial destruction and swollen by wartime production and technology, enjoyed unqualified preeminence. It seized the opportunity, by default if not by design, to reconstruct the world on radically different terms—break up colonial empires, create republican institutions at the global level, invite universal membership but also give great powers special privileges, rebuild war torn countries but now as democratic not authoritarian societies, and foster open societies, borders and markets. The idea was to replace the Westphalian balance of power system, not restore it. The world would be organized as a liberal republic, just as the United States was organized as a liberal republic. At the San Francisco Conference inaugurating the UN, President Harry Truman compared the UN Charter to the American Constitution.

That the United States abandoned nationalism for globalism after World War II is hardly surprising. Its preponderant power explains a lot. What was unique was American nationalism: it was intrinsically internationalist. American nationalism built a Western world premised on liberal (or republican) values and institutions, something which no authoritarian power would have done. It did not try to preserve its empire; it deliberately accepted relative decline by helping other countries grow faster than the United States. It also supported liberal institutions, the necessity of opposing parties within democratic countries and contentious politics among democratic countries (today’s conflicts between the United States, eu and Japan). Liberal meant competition, not centralization. This strategy began with the defeated powers, Germany and Japan, and continued throughout the postwar era with each succeeding generation of developing nations. Most recently, it included America’s greatest gamble of all: China and India. Imagine an authoritarian Russia or China pursuing such policies, then or today. This is the essential difference between liberal and authoritarian nationalism.

It is helpful to recall this postwar policy because it created the globalism we have today—a globalism that does not reject nationalism but is based on liberal nationalism. America’s third chance comes in a world that is vastly better than the world of 1919. There is no need to find safety from this world by withdrawing. Nor is there a need for the United States to assume disproportionate burdens. There are other powerful liberal nations capable of sharing leadership responsibilities. The United States can focus on overlapping not overarching interests. It can ask other democratic nations to do more, and it can use its relative leverage of geographic distance and open markets to achieve a more equitable balance of burdens and responsibilities.

Globalism tends to make all conflicts universal; nationalism prioritizes conflicts on a nation’s borders. Regionalism mediates between the two. Most conflicts today are not universal. Terrorism is not a global war like the Cold War; nor is it primarily a territorial matter located in a single spot (though a caliphate did and could once more emerge). Russia’s threat does not extend to Asia and Cuba as the Soviet threat did during the Cold War; it centers on restoring the former Soviet space in the Caucasus, Ukraine, Poland, Hungary and the Baltic states. And while China’s threat is increasingly global, its military capabilities are still largely local (e.g., South China Sea) and its economic capabilities are constrained by its dependence on world markets—an entanglement with the United States that never existed in the case of the former Soviet Union. China and Russia might still combine to pose a global threat, but they no longer have a common ideology as they did under communism. They have common interests in opposing the Western liberal order and might use Iran and North Korea as regional conflicts to project Russian influence into the Middle East and Chinese influence into Asia.

PRESIDENT TRUMP seems to be finding his way to this new combination of globalism and nationalism. He is more nationalist than any president since Franklin Roosevelt in the mid-1930s. But because the world is different and better, he also accepts realist aspects of the world that did not exist in the 1930s. He accepts the new world as it is with its Cold War democratic alliances, not the old world of authoritarian nationalism as it was under the balance of power. Yes, he sharply criticizes the alliances, but he does so to make them stronger, not weaker. He wants the allies to do more, not the United States to do less. He has increased both U.S. defense spending and U.S. NATO contributions.