A Return to Geopolitics in the Mediterranean 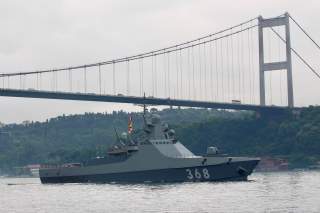 American policymakers might be forgiven for losing focus on one of the world’s vital strategic crossroads. For much of the past three decades, the Eastern Mediterranean has effectively been a backwater for U.S. national security. But profound geopolitical transformations once again demand U.S. leadership to capitalize on new opportunities and prevent the region from becoming a cauldron of conflict like the South China Sea.

The Eastern Mediterranean’s position at the nexus of Europe, Asia and Africa means it has been an epicenter of great power competition and conflict since antiquity. Fittingly, it was where the United States took its first steps as a global superpower at the outset of the Cold War. In 1947, the Truman Doctrine announced American assistance to Greece and Turkey as the centerpiece of a broader commitment to defend the free world against communism.

The region remained a key node for U.S. grand strategy throughout the decades of superpower standoff, and NATO enjoyed a clear military superiority over Soviet forces in the theater. But the U.S. regional presence became attenuated during the decade after the end of the Cold War and the so-called “peace dividend.” Subsequently, more pressing conflicts pulled America’s attention toward the Persian Gulf, Afghanistan and elsewhere.

Now the Eastern Mediterranean is rapidly reemerging as a crucial crossroads, driven by remarkable geostrategic realignments that raise prospects for both cooperation and conflict. The Jewish Institute for National Security of America’s (JINSA) Eastern Mediterranean Policy Project, which we co-chair, has just issued its initial report laying out the region’s transformation and the implications for U.S. security.

The first major catalyst is Turkey’s transformation under President Recep Tayyip Erdogan. No longer a reliable NATO member, it is increasingly authoritarian and unpredictable at odds with erstwhile partners—particularly the United States and Europe but also Israel and Egypt. The acquisition of advanced S-400 air defenses from Russia is indicative of Turkey’s abandonment of its traditional role as NATO’s southern bulwark.

Another major driver of change is the resumption of great power rivalry, identified by U.S. national security and defense strategies as the chief threat facing the country. Though more commonly associated with Eastern Europe and the Western Pacific, Russia and Iran are injecting it into the Eastern Mediterranean as well.

Through its proxies, Tehran has a straight line of political and military influence through Iraq and Syria to Lebanon and the Mediterranean, including Hezbollah’s advanced missiles capable of targeting shipping, ports and energy infrastructure.

Likewise, Moscow is more involved than ever before, including renewed fleet activity and a formidable air defense bubble covering much of the region. Coming at a time when the U.S. regional presence has diminished, American planners for the first time in decades can no longer assume the Eastern Mediterranean is an uncontested operating environment.

Third, the Eastern Mediterranean is home to the largest offshore natural gas discoveries of this millennium, with prospects for significant additional findings. This potential boon for the region is overshadowed, however, by the fact that many regional actors have competing territorial claims to these valuable resources, heightening already existing tensions and compounding the risk of conflict.

The absence of a robust U.S. force posture in the face of these geopolitical and geo-economic shifts has yielded a region-wide arms race. Turkey’s naval buildup and gunboat diplomacy threatens Greece, Cyprus, Israel and Egypt—all of whom are drawing closer together on energy and security issues. Separately, the potential remains high for major Israel-Iran conflict over Lebanon, Syria and even farther afield. The proliferation of cheap unmanned and autonomous underwater vehicles would intensify the destabilizing effects of this arms race.

But amid these crises are also opportunities for the United States. Under American auspices, the nascent partnerships among our allies could help anchor regional stability and weaken Russia’s energy leverage over Europe. As it has shown recently, Greece is also willing to invest strongly in NATO and its bilateral relationship with the United States.

Yet while American policymakers have taken important initial steps to endorse and promote such cooperation, there is considerable disarray about how to handle relations with Turkey. This reflects a broader uncertainty about U.S. intentions and commitment.

Given our extensive experience in the region, we believe the Eastern Mediterranean must once again command U.S. strategic attention. This means the United States needs to begin viewing the region as a coherent strategic entity—something which is impossible unless our diplomatic and national security bureaucracies address the organizational stovepipes cutting through the heart of the region.

More fundamentally, American policymakers must make abundantly clear to allies and adversaries alike: the Eastern Mediterranean is back as an area of critical importance to U.S. national security, and the United States will remain engaged in providing diplomatic leadership and frameworks for security cooperation to stabilize a vital international thoroughfare.