Return of the Sanctions: Banks Should Steer Clear of the Central Bank of Iran 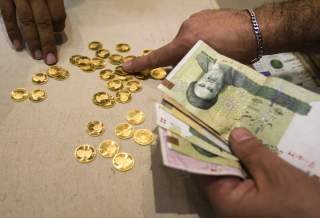 The U.S. Treasury Department has set its crosshairs on two more Iranian illicit finance schemes. Late last week, Washington designated a network spanning Iran and the United Arab Emirates that had “procured and transferred millions in U.S. dollar-denominated bulk cash” for the Islamic Revolutionary Guard Corps Quds Force (IRGC-QF), according to the Treasury Department’s press statement. On Tuesday,the department revealed another network funneling money through an Iraq-based bank to the IRGC-QF and the Lebanese terrorist group Hezbollah. The lynchpin of both schemes was the Central Bank of Iran (CBI)—Tehran’s primary hub for illicit finance.

The announcements came in the wake of President Donald Trump’s decision to withdraw the United States from the Iran nuclear deal, formally known as the Joint Comprehensive Plan of Action (JCPOA). The Treasury Department’s actions, however, were tied to existing counterterrorism sanctions, not the nuclear sanctions affected by the agreement. The first set of sanctions were the result of coordinated action with authorities in the UAE and both actions were likely culminations of weeks if not months of work by Washington’s financial warriors to identify nodes of Iran’s illicit networks.

As part of the second set of sanctions, the department also took the unprecedented step of designating the head of the CBI, stating that “it is appalling, but not surprising, that Iran’s senior-most banking official would conspire with the IRGC-QF to facilitate funding of terror groups.”

Regarding the UAE-based operation, the CBI was not only “complicit” in the scheme, but also actively “abused” its relationships with Emirati entities, noted the Treasury Department, in order to “fund and arm” IRGC-QF backed militias and terrorist groups. Echoing repeated warnings from the global financial transparency organization the Financial Action Task Force on the threat Iran poses to the international financial system, Secretary Steven Mnuchin urged all countries to “be vigilant” against Iranian illicit financial activities. Iran’s penchant for using its formal banking sector to fund its vast array of illicit and destabilizing regional activities is what makes engaging in any commerce with the Islamic Republic economically and reputationally dubious.

The Iranian central bank’s part in this plot is highly reminiscent of the role it played in facilitating transactions for sanctioned Iranian banks and Tehran’s nuclear program and terrorism prior to the department’s actions against CBI in 2011.

In the summer of 2010, the CBI was explicitly mentioned in the toughest UN Security Council Resolution on Iran, 1929, which highlighted the bank’s support for “proliferation-sensitive nuclear activities, or to the development of nuclear weapon delivery systems.” In plain English, that means the UN determined the CBI was supportive of Iran’s nuclear and missile programs.

In November 2011, Washington took a dramatic step and designated the entire Iranian financial sector—including the CBI—as a “jurisdiction of primary money laundering concern” under Section 311 of the USA PATRIOT Act.

Citing the “illicit and deceptive financial activities that Iranian financial institutions—including the Central Bank of Iran,” the finding provided specific information about the CBI’s role in Iranian terrorism and proliferation finance and sanctions evasion. The U.S. government also warned that the CBI intentionally “engage[d] in deceptive practices to disguise illicit conduct, evade international sanctions, and undermine the efforts of responsible regulatory agencies around the world.” The CBI’s latest manipulation of its relationships with financial institutions in the UAE indicates that the tiger is yet to change its stripes.

While a Section 311 designation warns the global financial system, only U.S. banks are required to implement the so-called “Special Measures” regarding enhanced due diligence, enhanced reporting and limitations on correspondent accounts. In the final days of 2011, however, Congress issued statutory sanctions against CBI as part of the National Defense Authorization Act (NDAA) of 2012. Section 1245 of the NDAA imposed secondary sanctions on, and prohibited foreign financial institutions from transacting with, the Central Bank of Iran, with limited exceptions for humanitarian trade and crude oil purchases.

Under the JCPOA Washington had waived these secondary sanctions—in addition to suspending other penalties—but notably did not remove the Section 311 finding. The continuation of the Section 311 finding indicated that the nuclear deal did not resolve all outstanding concerns about Iranian malign activities and financial risks. The Trump administration’s May 12 deadline to “fix” the flaws in the JCPOA was tied to the renewal of this particular sanctions waiver.

Washington is now in the process of reimposing all of the sanctions suspended or lifted under the nuclear deal. The Treasury Department advises banks, companies and individuals who had struck up business with Iran to begin to close up their activities before the full array of sanctions are again in force by November 2018. The Treasury Department’s designation of the Iranian-UAE and Iraqi-based networks, however, is a reminder to businesses around the world that even though the department is allowing for an “orderly wind-down” of trade with Iran, that deal or no deal, any exposure to the Central Bank of Iran makes one a partner with a hub of terrorist finance.

Annie Fixler is a policy analyst at the Foundation for Defense of Democracies’ Center on Sanctions and Illicit Finance.

Behnam Ben Taleblu is a research fellow focusing on Iran at the Foundation for Defense of Democracies.

Image: A customer buys Iranian gold coins at a currency exchange office in Tehran's business district October 24, 2011. Iranian media reported last week that monetary authorities had reversed a six-month-old decision to cut interest on bank deposits, aiming to mop up excess cash in the economy and halt a dangerous rise of inflation. The news made sense to economists, who said April's interest rate cut had pushed Iranians to withdraw their savings and rush to buy dollars and gold as a safeguard against inflation -- creating heavy pressure for the rial currency to depreciate. REUTERS/Raheb Homavandi ​