Revealed: Don’t Buy a Fighter Jet for Its Speed 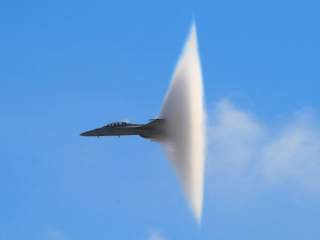 What can be seen can be destroyed, is an old battlefield proverb. And in the dogfight of the future, victory will go not to the swiftest jet, but the one with the best sensors.

That's where air combat is headed, according to a new study by the Center for Strategic and Budgetary Assessments. And if that forecast is correct, then this is good news for the beleaguered F-35, which has been criticized for mediocre flying performance, but whose stealth and sensors may allow it to ambush Chinese and Russian aircraft.

"This transformation may be steadily reducing the utility of some attributes traditionally asso­ciated with fighter aircraft (e.g., extreme speed and maneuverability) while increasing the value of attributes not usually associated with fighter aircraft (e.g., sensor and weapon payload as well as range)," concludes the study, written by CBSA researcher and former U.S. Air Force officer John Stillion.

That conclusion was based on a study of trends in air combat dating back to World War I, and which included a CSBA database of 1,467 reported (though probably not actual) aerial victories since 1965. From 1914 to 1965, the primary air-to-air sensor was the Mark I eyeball, and the primary air-to-air weapon was the machine gun or cannon. "The physical limitations of human vision give it a relatively short effective range as an air-to-air sensor of about 2 nauti­cal miles," the study notes, while machine guns and cannon required closing to within 50 to 500 meters of the target. Thus air combat was essentially a contest of situational awareness, with victory going to who spotted the enemy first, and many victims never seeing who shot them down. In other words, the most successful tactic was the aerial ambush.

Even through the 1970s, air combat was still a close-range affair. Yet by the 1980s, improved sensors, missiles, Identification Friend or Foe technology and airborne radar stations had transformed the turn-and-burn dogfight into ‘Beyond Visual Range’ battles where the opposing aircraft never saw each other. "Over the past two decades, the majority of aerial victories have been the result of BVR engage­ments where the victor almost always possessed advantages in sensor and weapon range and usually superior support from 'offboard information sources’ such as GCI [ground control] radar operators or their airborne counterparts in Airborne Warning and Control Systems (AWACS) aircraft,” according to the CSBA study, which suggests that the reason North Vietnamese pilots were more successful shooting down American planes in the Vietnam War than Iraqi pilots were in the Gulf War was much improved U.S. situational awareness in the latter conflict.

On the other hand, the speed of fighter aircraft has become much less important since 1965, the study finds. In 1914 or 1940, the faster aircraft could pounce on an unsuspecting prey before it could react. But with AWACS radar able to detect targets 200 miles away, and fighters equipped with their own advanced radar and infrared sensors, speed isn't as important as the ability to detect while avoiding detection. "These developments are likely to provide even better SA [situational awareness] and longer threat warning and set-up times in the future, because sensor and network capabilities tend to advance much more quickly than raw platform performance measures like fighter top speed, which has improved little over the past 50 years," CBSA says.

Based on these assumptions, the study concludes that the most important attributes of future fighter aircraft will be long-range sensors, stealth, datalink network connectivity and long-range air-to-air missiles. Most interestingly, Stillion argues that these characteristics are closer to those of bombers than fighters. "If this is true," he writes, "then a sixth-generation 'fighter' may have a platform that is similar to a future 'bomber' and may even be a modified version of a bomber airframe or the same aircraft with its payload optimized for the air-to-air mission. If this is correct, then the United States may be in position to save tens of billions of dollars in nonrecurring development costs by combining USAF and Navy future fighter development programs with each service’s long-range ISR/strike programs."

Stillion makes a valid point. Aircraft design is a compromise, and if speed and maneuverability come at the expense of range, payload and stealth, then this is a bad trade if situational awareness is becoming the prime determinant of victory. On the other hand, one expects that all things being equal, a fast, maneuverable stealth jet will beat a slower, clumsier stealth jet. The question is whether all things will indeed be equal.

While the CBSA study barely mentioned the F-35, the controversial Lightning II is the poster child for the speed vs. stealth debate. If sensors and datalinks are king, then even if the F-35 is flawed, it is a step in the right direction. But if speed rules, then America is in trouble.