Revealed: The Next Energy 'Revolution' 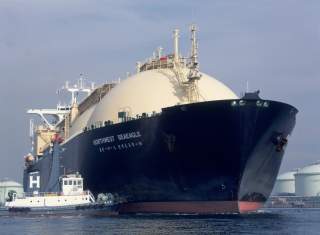 Świnoujście, Poland, on the frigid Baltic Sea where that country meets Germany seems to have little in common with the swampy heel of Louisiana where that state meets Texas. However, the sites are connected—and connected with many others around the world—in their importance to the next revolution in energy.

Over the last decade, the biggest change in energy was how and where hydrocarbons were removed from the earth. The United States led this change. Take hydraulic fracturing, or “fracking,” which allows natural gas to be collected from shale rock formations. As the use of this method has taken off, shale gas has gone from 4 percent of the total natural gas produced in the United States in 2005 to a projected 40 percent this year, according to the U.S. Energy Information Agency (EIA). Or take oil—in the last decade U.S crude oil production has increased from five million barrels a day to its current pace of more than nine million barrels a day. However, a different kind of energy revolution will take place between now and 2025. While the last decade was about the energy buried in the earth and how to get it out, the next decade will be about how the energy already removed from the earth is moved across it.

Powering Central and Eastern Europe has long been a story of importing energy from the east, and not just from Russia. Before plans were scaled back, the EU- and U.S.-supported Nabucco pipeline was scheduled to pull natural gas from the Caspian across Turkey and up into Austria. Now, however, Europe is looking to the west and to importing liquefied natural gas (LNG) by tanker to sites such as the new terminal in Świnoujście. The terminal, a first in Poland, is expected to come online in 2016 and import up to five billion cubic meters of gas a year. Its sister site, an LNG exporting terminal, is now being developed by Cheniere Energy in Cameron Parish, Louisiana, on the border with Texas. Once completed, the tanks at this site will hold eighty-one thousand tons of exportable LNG at -260 degrees Fahrenheit, Bloomberg reported this week. And more LNG exporting terminals are in the works. With annual U.S. natural-gas production having already increased by over 40 percent in the last decade, the EIA expects that the United States will become a net exporter of natural gas by 2017.

Japan shows why LNG is poised to go global. After the Fukushima tragedy, LNG imports to Japan increased by a quarter as natural gas replaced nuclear power in generating electricity. Japan is now the largest LNG-importing country in the world, and indications are that it will remain at or near the top of this list. Reuters reported this week that due to legal and technical challenges, only seven (of a total forty-two) nuclear reactors will be powered up in the next few years, half the number predicted last year. If most of Japan’s nuclear energy program stays closed, or if more reactors fail to reopen, imported LNG becomes an even more essential energy replacement for this U.S. ally. Across the world, the specialized transport infrastructure needed to ship natural gas is being built. LNG now looks to become a revolution in the movement of energy comparable to what fracking has been for the collection of energy.

What about oil? Will low gas prices persist? In twelve of the last twenty years, the annual change in the benchmark price of a barrel of oil has moved by more than 15 percent. Oil’s current low price does have important geopolitical implications as exporting countries adjust their budgets to account for less revenue. But overall, there is no reason to expect any less year-to-year volatility in price going forward. Banking on oil staying below $50 a barrel now is as ill advised as last year believing it was permanently fixed above $100 a barrel.

Instead, the more long-lasting change will be the decision Congress likely takes up this month about removing restrictions on the export of crude oil from the United States. These restrictions have been in place since the oil shocks of the 1970s, and momentum for their removal is building. The case for allowing such exports was strengthened this week as a new report by the EIA concluded U.S. gas prices “would be either unchanged or slightly reduced by the removal of current restrictions on crude oil exports.”

Coal is also on the move. Between 2005 and 2014, U.S. coal production fell by about 11 percent as natural gas took over a larger share of electricity generation. But the coal that is still being mined is finding a home abroad. Over the same period, the U.S. nearly doubled the amount of coal it exports.

Where does this leave renewable energy? Recent research has pointed not to an imminent revolution in renewable energy, but rather to its limitations. Solar and wind power combined produce less electricity than what is generated from hydroelectric power alone. All renewables are dwarfed in their contribution to total U.S. energy by oil, gas and coal. Solar and wind are becoming more competitive with new technology, but as nationwide sources of abundant power, both remain the next next energy revolution.

For example, solar cells are reaching new levels of efficiency with gallium-based compounds and with advanced materials called perovskites. But these higher-efficiency cells have only been made in limited quantities so far. Meanwhile, commercially available solar cells have their own obstacles to overcome. When blocks of refined silicon are cut into the wafers used in solar cells, up to half of the expensive refined silicon is lost, according to a BBC report. Reducing this waste is just one way to cut solar power’s cost and increase its competitiveness.

With wind, too, limitations have been in the news lately. Research just published in the Proceedings of the National Academy of Sciences shows that, because a grouping of turbines slows wind speed, larger and denser wind farms have diminishing returns. To reach the upper limit in power generation, turbines will have to be spread out, producing less than 1 megawatt per square kilometer. More worrying in the short term, the most recent EIA data show the amount of electricity generated from wind fell nearly 6 percent in the first half of this year compared with the same period in 2014. "Our economy still has to rely on oil and gas," President Obama said Monday as he began his three-day tour of Alaska. He’s right.

But just as with gas, oil and coal, it is the movement of energy that looks to be the next big step forward with renewables. The latest issue of IEEE Spectrum makes a strong case for expanding the electrical grid across borders—and doing so using existing technology. “A supergrid would ensure that all or nearly all the electricity that’s generated would get consumed,” writes Clark W. Gellings, the essay’s author.

What Should the U.S. Do?

What does this all mean for U.S. policy? To begin with, if the United States is exporting more energy, and if allies such as Japan and Poland rely on imported power more, then safe sea-lanes matter.

America’s naval capabilities have already come up in the 2016 presidential election. Ohio governor John Kasich has called for increasing the number of aircraft carriers to “closer to 15.” Other candidates have also cited numbers for naval power, but more often than not as shorthand for a general commitment to military investment. As shorthand, as sound bytes, such statements risk being dismissed just as quickly they are made. This is exactly what happened when President Obama countered 2012 Republican candidate Mitt Romney’s point that the U.S. Navy had the fewest number of ships since 1916 with the quip that there were also fewer “horses and bayonets.” It is essential to remember when naval numbers come up, as they will, that they represent real assets safeguarding real sea-lanes—sea-lanes that will see more traffic in the coming decade as more energy moves across the earth.

Consider the threat of piracy. The International Maritime Bureau's Piracy Reporting Center maintains a live map of incidents around the world. The current map has markers clustered across South East Asia, the east and west coasts of Africa and in the Caribbean. In the first half of this year, 134 incidents of piracy and armed robbery at sea were reported, a 15 percent increase from the first half of last year. And piracy is just one of many threats to shipping and international commerce.

An energy-transit revolution has begun. It will scale, however, with market demand and with the openness of each country’s domestic politics to the movement of energy beyond its borders. The United States can choose to lead this revolution, as it has in accessing buried hydrocarbons, or it can choose to demur. Whichever the choice, the consequences of this next energy revolution will be geopolitical and important.