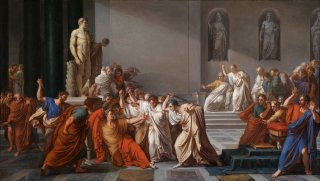 HISTORY IS mainly a matter of unforeseen outcomes yielding unintended consequences. The assassination of Julius Caesar in 44 BC offers a striking case in point. Hoping to bring back the (largely imaginary) good old days of the early Roman Republic, a privileged, patrician clique of Roman senators led by Gaius Cassius Longinus (Shakespeare’s “lean and hungry” Cassius) and Marcus Brutus (Shakespeare’s “noblest Roman of them all”) murdered a brilliant soldier-statesman in what they convinced themselves was a heroic act of tyrannicide. In fact, it offered a reminder that all rogues led to Rome. Although he carefully avoided involvement with the assassination plot, the great Roman orator, Marcus Tullius Cicero, was all in, arguing that Julius Caesar had

...conceived a great desire to be king of the Romans and master of the entire world and accomplished this. Whoever says that this desire was honorable is a madman, since he approves of the death of the laws and liberty, and considers their hideous and repulsive suppression glorious.

There was, however, a crippling flaw in Cicero’s argument. The “laws and liberty”—and, more particularly, their social, moral, and religious foundations—had all predeceased Julius Caesar, eaten away by corruption, decadence, and the ancient Roman equivalent of insider trading—the running of the Republic as an enterprise of the aristocracy, by the aristocracy, for the aristocracy. In murdering Caesar, the conspirators were killing Rome’s greatest, most forward-looking leader in a doomed effort to preserve something that was already dead.

They were also committing what may have been the most consequential political assassination in the history of the world, although a strong case could be made for Gabrilo Princip’s 1914 slaying of Archduke Franz Ferdinand, a much less formidable individual but a victim whose rank and position as heir to the Austro-Hungarian throne made his death the detonator for a devastating global war. By the time the whole shebang was over it had shaken the social and political order of modern Europe to its foundations in ways from which it is only now beginning to recover. But if Franz Ferdinand’s death was as consequential as Caesar’s, his life certainly was not. A crotchety neurotic, Franz Ferdinand had a rational vision for reforming the ramshackle multi-national, multi-lingual empire he was supposed to inherit, but his personality and intellect were probably not up to the job, even if the cataclysm of World War I had been averted.

Caesar, on the other hand, was a brilliant Renaissance man 1,500 years before there was a Renaissance. He played many roles in his lifetime—youthful playboy, corrupt political machine boss, brilliant propagandist, conquering military hero on an epic scale, and an administrative reformer of genius, to name only a few. Throughout his mature career, he adhered to a sound if somewhat cynical apothegm: “If you must break the law, do it to seize power; in all other cases observe it.”

EVEN IN the pursuit of power Caesar preferred, whenever possible, to do it by the book. Almost all of his many promotions—including the erection of monuments in his honor, his virtual deification, and his proposed lifetime lease on executive power—had been sought through the proper channels, including action by a Roman Senate that he incrementally padded by such measures as placing all free-born Italians on the same legal footing as the citizens of Rome and enfranchising Cisalpine Gaul. Although his political roots were populist, in the tradition of Marius and the Gracchi brothers, Caesar carried out a program of welfare reform that slashed the number of Roman citizens on the grain dole—the ancient Roman equivalent of a universal food stamp entitlement—by more than half (from 320,000 to 150,000) by imposing a means test. He initiated a census for the whole Italian peninsula and introduced the “Julian” calendar, which remains the standard to this very day, and he had plans to drain the Pontine marshes to eradicate malaria. That commendable goal, after Caesar’s murder, remained on the back burner until it was finally undertaken as a massive public works project by one Benito Mussolini nearly two millennia later.

What Caesar seems to have envisioned, many centuries before the concept even had a name, was a kind of constitutional monarchy. To give an idea of just how visionary this idea was in Caesar’s day, it was not applied by a major power in Western Europe until England’s so-called “Glorious Revolution” of 1688, more than a millennium and a half after his death. Caesar’s political vision, besides coming centuries earlier, covered a far wider base: all free adult males in a Roman Imperium already encompassing considerable chunks of Europe, Africa, and Asia—a military, cultural, and economic colossus unrivaled to this day. As one mid-twentieth-century historian summed it up with a touch of hyperbole,

This conception of government, and Caesar’s reorganization of Rome and Italy, completed the miracle whereby the youthful spendthrift and roisterer had become one of the ablest, bravest, fairest, and most enlightened men in all the sorry annals of politics.

The man was that great rarity, a practical visionary. When, in his mid-fifties, not long before his assassination, he declared that, “I have lived long enough to satisfy both nature and glory,” it was no idle boast.

Within days of his death, the same fickle Roman mob that had passively acquiesced to Caesar’s murder was baying for the blood of the assassins. As Edward Gibbon pointed out in a little-read essay written after his Decline and Fall of the Roman Empire, the conspirators had proved themselves woefully unequal to

…the arduous task [they] had so rashly undertaken, of restoring the commonwealth; instead of restoring it, the death of a mild and generous usurper [Julius Caesar] produced only a series of civil wars, and the reign of three tyrants whose union and whose discord were alike fatal to the Roman people.

The civil wars triggered by Julius Caesar’s assassination lasted fourteen years and form the backdrop for British author Peter Stothard’s clever, knowledgeable, sometimes idiosyncratic, and always evocative The Last Assassin. Much of the decisive action takes place at sea and the book itself—a mostly smooth blend of fact and intelligent imagination—resembles a form of hybrid rigging popular in the golden age of sail many centuries after Octavian—Julius Caesar’s nephew and adoptive son and heir, the future Caesar Augustus—defeated Mark Antony in a muddled naval engagement at Actium, thereby ending the Roman civil wars triggered by the assassination of Caesar.

Appropriately enough, the name of the rigging was inspired by a character from Greco-Roman mythology. Hermaphroditus, the legend goes, was the son of two deities, Hermes the Messenger and Aphrodite, Goddess of Love. He was so taken by the beauty of a nymph he spied one day a-bathing that the two intertwined forming a single being combining both sexes: the first Hermaphrodite. Thus, when eighteenth-century shipwrights developed a fast, trim craft that paired the square sails of a brig with the lateen sails of a schooner, they called it a Hermaphrodite Brig.

Stothard’s book is the literary equivalent of a Hermaphrodite Brig. It merges elements of two forms: scholarly history and historical novels. The result is a light, swift, highly mobile narrative, fleshing out real characters by fictional means grounded in the author’s sound, solid knowledge of his subject; a deft blend of narrative history and intelligent historical fiction. While either a longer, more fully developed historical novel, or a detailed, disciplined, strictly factual/analytical historical chronicle might have made for a more substantial work, The Last Assassin is achievement enough.

THE THREAD that ties sprawling locales and a teeming cast of characters together is the fate of Caesar’s assassins as, one by one, and sometimes in groups, they are hunted down by Caesar’s avengers, especially an impetuous Mark Antony and the cold, calculating Octavian. While tracking the lives and events surrounding many of the major historical figures of the period such as Cicero, Brutus, and Cassius, the most personalized—and fictionalized—parts of the book, including its opening and closing pages, focus on one of the B-list assassins, a competent mariner and shipwright who was also a minor literary man and epicurean philosopher, Cassius Parmensis. Parmensis’ insignificance is probably one of the reasons Stothard chose him as a sort of everyman protagonist. His very obscurity makes him a virtual tabula rasa, one Stothard can fill with his own opinions, interpretations, and speculations in a way that would have been impossible with a more familiar, documented, and self-defined historical figure.

Parmensis, Stothard informs us in his opening paragraphs,

…had been one of the lesser wielders of the daggers on the Ides of March, one of the common herd of conspirators, not a Brutus, not the other more famous Cassius, those men who were dead and already entering history. While, like others in the conspiracy, Parmensis was a writer of history himself, his name was not yet part of it. In his early forties, he was old enough respectably to retire. But, at a time when Caesar’s angry heir [Octavian] ruled supreme, he could not return to Italy, not to Rome, not to his once fertile home between the Rubicon and Po rivers. [In Athens] in the streets below the Acropolis, Parmensis had new admirers, a few former brothers-in-arms, even some readers for his poems and plays.