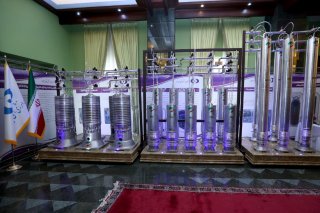 Depending on the day, media reporting suggests that nuclear talks between Iran and six world powers have either recently progressed or are on the brink of failure. Yet even if the parties to the 2015 Iran nuclear deal succeed in reviving it, the accord is wholly inadequate to address the growing threat posed by Tehran’s advanced gas centrifuge uranium enrichment program.

Although Iran in 2019 began exceeding the Joint Comprehensive Plan of Action’s (JCPOA) limits on its use of advanced centrifuges—machines that can enrich uranium more rapidly and in greater quantities than Iran’s older centrifuge models—the nuclear agreement ultimately permits a major expansion of Tehran’s enrichment program, including the use of advanced machines. The deal’s advanced centrifuge provisions begin a phased expiration from 2024 until 2029.

The JCPOA permits Tehran to enrich no more than 300 kilograms of up to 3.67 percent enriched uranium—a quantity well below weapons-grade—using 5,060 IR-1 machines, which are Iran’s earliest centrifuge models. At the same time, the accord temporarily restricts enrichment using newer and more advanced models, which, termed in order of chronological development, include machines such as the IR-2m, IR-4, IR-5, IR-6, IR-6s, IR-7, IR-8, and various offshoots of the IR-6 and later generation centrifuges.

When Tehran and world powers negotiated the JCPOA, Iran was trying to get its IR-4 and other machines to operate reliably. It was, therefore, imperative for the nuclear accord to verifiably restrict Tehran’s development of advanced centrifuges before the clerical regime could master the technology.

The JCPOA ultimately required Iran to store, but not destroy, most of its advanced centrifuges, including those it held in greatest quantities, such as 1,000-1,200 IR-2m and 164 IR-4 machines. Pursuant to the accord, the International Atomic Energy Agency (IAEA) would monitor Iran’s production of certain centrifuge components to ensure it was not building whole machines.

Nevertheless, the JCPOA did not prevent the regime from working with raw materials and from stockpiling and preparing equipment for a future surge in centrifuge manufacturing. The JCPOA also did not restrict Tehran from carrying out additional advanced centrifuge research and development (R&D) and from testing limited quantities of these centrifuges. The accord permitted Iran to continue R&D via computer modeling of centrifuges, carry out mechanical testing to improve the centrifuges’ functionality, and even test certain advanced models with uranium. The JCPOA did prohibit tests that use uranium from producing any enriched uranium product. But the tests that the deal permitted would still help Iran improve the machines’ performance.

Following President Donald Trump’s withdrawal from the JCPOA in 2018, Iran proceeded to violate the deal by deploying and enriching uranium in large numbers of advanced centrifuges—namely, hundreds of IR-2m, IR-4, and IR-6 models. Perhaps most alarmingly, Tehran has now installed at least 400 IR-6 centrifuges and plans to install a few hundred more. The Institute for Science and International Security estimates that Iran, using just 650 IR-6 machines—which are more than five times more powerful than the IR-1—could make enough weapons-grade uranium for an atomic bomb within a month. Overall, Iran’s breakout time—that is, the amount of time it would take the regime to accumulate enough fissile material for a single nuclear weapon —currently stands at just three weeks.

Still, even if Iran were complying with the JCPOA, the deal itself paves the pathway for the enrichment program’s legalized expansion.

Near the end of 2024, the JCPOA permits Iran to prepare for a “gradual evolution to the next stage of its enrichment activities.” Tehran can produce—without a necessary component called rotors, which facilitate uranium enrichment—up to 200 IR-6 and 200 IR-8 centrifuges per year. Between 2026 and 2029, Iran may deploy and operate a total of between 2,500 and 3,500 IR-2m and IR-4 centrifuges or their equivalent in capacity. Tehran may also test with uranium 150 IR-6 centrifuges and eighty-four IR-8 centrifuges.

These capabilities would considerably reduce Iran’s potential breakout time. After 2031, Iran faces no additional restrictions on its ability to stockpile weapons-grade uranium. Thus, by re-entering the JCPOA, the Biden administration would—at best—buy only a short period of time before the nuclear crisis resumes.

At the latest talks, Iran reportedly wants to keep its existing advanced machines intact, and it is highly unlikely that Washington will demand their destruction. Whether the regime’s advanced machines are ultimately dismantled and stored—or shipped out for temporary consignment by another party—Tehran will build back its program in a handful of years.

Through its work to date, Iran has already substantially exceeded the JCPOA’s enrichment limits, including by producing 60 percent enriched uranium, which has no legitimate civilian purpose. As a result, the JCPOA’s provisions are essentially obsolete in delaying the regime’s acquisition of relevant know-how. Yet it appears that the Biden administration will allow the Islamic Republic to extort the United States out of billions of dollars for little in return.

Congress must intervene. Lawmakers should strengthen their oversight role by invoking legislative provisions in the Iran Nuclear Agreement Review Act of 2015 that would force a congressional vote on any decision by the White House to lift sanctions on Iran. At a minimum, congressional hearings are in order.

Any nuclear agreement that does not permanently remove Iran’s advanced centrifuge threat really is not worth the paper it is written on.

Andrea Stricker is a research fellow on nonproliferation at the Foundation for Defense of Democracies (FDD). FDD is a Washington, DC-based, nonpartisan research institute focusing on national security and foreign policy. Follow Andrea on Twitter @StrickerNonpro.