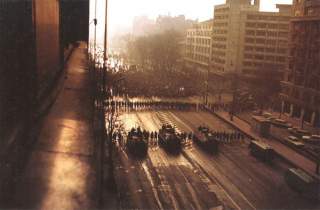 WHEN HE RAN for president in 2008, Barack Obama promised a new era of restraint in U.S. foreign policy. And in some respects, he has indeed been more restrained than his predecessor. But those looking for a reconsideration of America’s universalist ambitions have been disappointed by Obama’s record. Where it has mattered, there has been no retreat from the revolutionary ends to which George W. Bush committed the United States in his second inaugural address in 2005. Thus Obama (after much agonizing) threw in his lot with those seeking to overthrow Libya’s Muammar el-Qaddafi by force. Thus Obama called for Bashar al-Assad to leave, encouraged “allied” efforts to overthrow him and made negotiations to end the civil war in Syria dependent on his departure. And thus the Obama administration (with the president himself curiously in the shade) played a key role in supporting the Maidan’s overthrow of Ukraine’s elected president, Viktor Yanukovych.

Liberal interventionists, neoconservatives and State Department officials insist that it is America’s duty to support those making revolution in other countries. The United States has often been attracted to that policy since the Reagan administration, though it was only under the younger Bush that it reached full flower. While the public rightly grimaces over the consequences, there is little appreciation by the elites of how unprecedented these doctrines are, both in international law and in the American diplomatic tradition. Given the ill consequences following the breakage of states across the Middle East and now in Ukraine, the time is ripe for reconsidering these newfangled views. As a method of promoting liberty, the strategy of overthrow is deeply counterproductive. The old American lexicon taught that anarchy bred tyranny, whereas the new school teaches that the revolutionary destruction of the old order will produce democracy. The new interventionism has also thrown out the old rulebook for dealing with civil war, substituting a set of policies that in practice provides Western powers with unlimited discretion to intervene in civil conflicts throughout the world.

IN THE LEGAL order birthed by World War II and the United Nations, the right of external intervention was sharply circumscribed; preventive war, in any normal definition of the term, was made illegal. A right of humanitarian intervention might be inferred from the vast discretion given to the Security Council by the UN Charter, but no one thought of inferring that until many years had passed. It contradicted the dominant emphasis in the charter on state sovereignty. The right of self-determination in the charter put the colonial powers on notice that their imperial rule was coming to an end, but states were not deemed to have forfeited their right to put down internal revolts. On the contrary, the state was seen as an indispensable source of order.

When circumstances subsequently arose that seemed to call for humanitarian intervention—as with Bangladesh, Cambodia and Uganda—the intervening states (India, Vietnam and Tanzania) invariably appealed to their right of national self-defense, not humanity, in justifying their military movements across borders. That was because they thought the humanitarian claim would not cut it in the international community, not because they had poor legal advice. Their actions did not cause a change in norms; that came later, with the end of the Cold War and the widespread call that the “sole superpower” should not hesitate to respond, by military force if necessary, to acts that shocked the conscience of mankind. The traditional prohibition against intervention that was consecrated in 1919 and reaffirmed in 1945 was then greatly relaxed, if not entirely abandoned. A whole host of interventions were subsequently pursued or proposed in the next twenty-five years that took, amid the plenitude of justifications offered, the most convenient route to the sea.

The grandest departure from the legalist paradigm took the form of the Bush Doctrine, with its warrant for preventive war and democracy by jackboot. A large portion of the world rejected Bush’s doctrine, but they did not get a voice in the matter, much less a veto. The United States did what it wanted.

A second hole in the legalist paradigm arose from a revived doctrine of humanitarian intervention, now called the “responsibility to protect” (R2P), which asserted a duty to intervene to rescue populations imperiled by gross humanitarian abuses. This view, as it is presented by the R2P myrmidons, is happily cleansed of all special national interests in theory, but deeply bound up with them in practice. Obama is more inclined to this idea than he is to preventive war; in America, R2P has its home on the left and is strongly urged upon him by voices within his own administration. But R2P, since it authorizes uses of force in anticipation of atrocities, as in Libya, has a strongly preventive rationale as well. In the authoritative version of R2P, endorsed by the UN General Assembly and Security Council, external action still depends upon Security Council approval, but that restraint is not accepted in American opinion.

Of course, many of these expansions in what is considered a just war have been contested at home and abroad. The American public is especially opposed to interventions that are purely humanitarian in character; it wants (but has never really gotten) a demonstration of the national interests at stake. In official circles, however, most of these criteria for intervention are seen as legitimate, even if exercised on a pick-and-choose basis, and with greater or lesser degrees of enthusiasm in any particular instance.

The sovereign state still remains the foundation of the international legal order, but there have been so many exceptions and provisos to its customary protections as to leave ample room for intervention whenever states wish to do so. At least, that is true of the West. A much stricter set of rules in practice binds the non-Western powers. Such are the advantages of hegemony.

IT IS THE conjunction of the right of revolution and the presumptive duty of external support for imperiled populations that needs special attention. The interplay between the two is an important phenomenon in its own right, as these doctrines—so potent together—are often considered separately. The interplay between the two is often ignored, but undoubtedly the expectation of external support has recently played a critical role in triggering rebellion.

To understand this issue properly, we need to go back to some long-standing debates in the tradition of reflection on just war, that sphere of thought dedicated to determining when the use of force is just or unjust. The thought of Hugo Grotius, the putative founder of modern international law, is the most profitable place to begin. During the Thirty Years’ War, in his Rights of War and Peace, Grotius formulated what to our ears must seem to be a surprising doctrine. Grotius made one of the first great statements of the principle of humanitarian intervention, but he simultaneously forbade a population to rebel. The suffering masses had to sit out oppression lest they invite anarchy, it appeared from his curious reasoning, but foreign princes might intervene to succor those selfsame masses when found in awful distress. You might think he had it backwards, and the weight of subsequent opinion would agree. Eighteenth-century publicists reversed the Grotian resolution—they gave greater latitude to the right of revolution, less to external intervention.

Two things are notable about this history: everybody saw the questions as related, and nobody justified both together. The reason, evidently, is that allowing both the right of rebellion and the duty of external intervention would imperil domestic and international order. What could possibly be the rule of limitation if everything could suffice for war?

Grotius opened the door to humanitarian intervention, but he denied the popular right of resistance to an oppressive ruler. In an age of religious warfare and widespread slaughter, his reasons had weight. Grotius was not actually as strict on the question of internal rebellion as his hostile critics, like Rousseau, have alleged; he carved out several important exceptions to his seemingly blanket prohibition against rebellion, such as when a king breaks a contract with his people, which were probably intended to justify the Dutch Revolt against Spain. But Grotius did look with horror on the anarchy that would arise in contests over sovereignty, and he was not alone in that conviction. He was followed by Hobbes, who erected a whole system around the same sentiment. Hersch Lauterpacht, the distinguished jurist and legal scholar, noted:

This frowning upon rebellion and the favouring of authority were in accordance with what were considered to be the essential needs of the times. The horrors of civil war were foremost in the minds of political thinkers. There was not, in this respect, much difference between Hobbes and Bacon on the one side, and Hooker, Gentilis, and Bodin on the other. They discussed in detail the right of resistance; they all rejected it. So, perhaps with less justification, did Pufendorf. At a time of general uncertainty and of loosening of traditional ties of society, national and international, order was looked upon as the paramount dictate of reason.