Rex Tillerson: More a Washington Victim Than a Villain 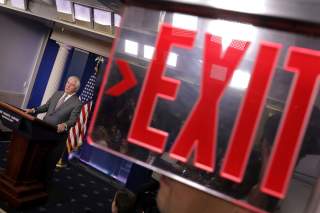 It must be painful for a man of Rex Tillerson’s attainments to realize he is widely regarded as a failure as secretary of state. To be disparaged within his own department, by most schools of thought in Washington, the media and even around the globe is pretty brutal for someone who has not fostered a failed war (as some of his predecessors did) or committed any known felonies. Does the man deserve better?

Sadly, I must judge that, in the league table of secretaries of state since the Second World War, Tillerson does come in dead last, and not because the others were all successful. However, I believe some of the criticism of Tillerson is premature (mine may prove to be) and much of it lacks context. It is that context I wish to examine.

As a member of the U.S. Foreign Service, I worked under secretaries of state from William Rogers through Madeleine Albright, and have closely studied the performance of those before and since. All the judgments about them which follow are entirely my own, with much based on personal memory.

An American secretary of state has a much more difficult job than do the foreign ministers of other countries, even of great powers. The scale and complexity of U.S. external relations dwarf those of any other government. While many foreign ministers spend more time than they should on the road, the work schedule and travel demands on our chief diplomat are really excessive. While all foreign ministers must coordinate the external activities of their government beyond their own ministry, Washington presents a secretary of state with extreme demands in this regard. Every department, agency and bureau of the U.S. government is engaged in international activities, often with better funding and staffing than available to State. Keeping it all together is like conducting a Berlioz symphonic extravaganza, but without rehearsals. It is no secret that the Pentagon often replaces State as the lead agency of U.S. policy abroad in many parts of the world. I served a tour in the Office of the Secretary of Defense because I had there vastly greater resources to engage my chosen region than did any official at State. Rivalries across the Potomac often severely undercut the authority and effectiveness of secretaries of state (think Shultz-Weinberger or Powell-Rumsfeld).

In addition, a secretary of state must deal with Congress—which contains 535 quasi-independent foreign policy centers—something a foreign minister in a parliamentary system need not do. In the modern era, a secretary of state must also be a media star and demonstrate sensitivity to our vast array of domestic constituencies, each with their own foreign agendas and grievances—something far in excess of any other countries. Most people would be shocked if they knew how little working time each day a secretary of state has available to devote to the conduct of international diplomacy and to his primary task as America’s foreign minister. The job may appear global, but the demands are overwhelmingly domestic. Hence, a political neophyte is at a severe disadvantage. Two of the most effective secretaries, Shultz and Baker, both had multiple Washington posts under their belts, including as Treasury Secretary, which by itself is a major foreign affairs job and a superb apprenticeship for State.

Thus, our foreign minister is more a Washington politician than an international statesman. Therein lies the essence of Rex Tillerson’s failure: he is the only person since the Second World War to take on direction of the State Department without prior Washington experience. He came to State with no background in Congressional affairs, in interagency relations, in dealing with the Pentagon (where the military services are often natural allies of State), with the 24/7 media monster or with the snake pit of American ethnic politics. All his predecessors who were successful were hardened veterans of many Washington battles (Marshall, Acheson, Dulles, Shultz, Baker and others). No matter how much international experience Tillerson acquired at Exxon-Mobil, he was a babe in arms when facing the real challenges of his new position. Indeed, knowing the outside world too well can actually cause problems for a secretary of state in Washington if he downplays his domestic duties (an early problem for Henry Kissinger).

Rex Tillerson has actually been somewhat blessed, as most of his cabinet colleagues—and especially Secretary of Defense Jim Mattis—and leading figures in Congress have not been his adversaries. Despite some frictions, the secretaries of state and defense and the national security advisor have played from the same sheet music. Tillerson has had some overt rivals, in the White House’s West Wing and at the United Nations in New York, but nothing out of the ordinary for the job. There is one exception, however.

The key relationship for a secretary of state is with the president. That relationship defines the job. In contrast to a foreign minister in a parliamentary system who may enjoy independent power, an American counterpart serves “at the pleasure of the President,” and is effective only with the confidence and active support of the president. The most successful secretaries were near alter egos of their presidents (Truman-Acheson, Nixon-Kissinger, Bush-Baker). Even secretaries with their own political standing needed visible presidential backing to succeed (Truman-Marshall, Eisenhower-Dulles, Obama-Clinton, Obama-Kerry). A competent secretary with only lackluster presidential support could achieve little (Carter-Muskie, Clinton-Christopher). The “team of rivals” concept simply does not work. Rivals rush to exploit any lack of presidential support at the expense of the secretary (Carter-Vance, W. Bush-Powell). Even a qualified secretary cannot succeed at State if the president is not fully supportive (Nixon-Rogers, W. Bush-Powell). Likewise, active presidential support can boost the effectiveness of a less-able secretary (Clinton-Albright, W. Bush-Rice).

On this metric, Secretary Tillerson was doomed from the outset. He was not the president’s first choice and enjoyed no prior relationship with Donald Trump or any member of the Trump team. Whatever may have been the terms under which Tillerson accepted the appointment, he received no presidential support in his most immediate task: staffing the senior positions in his own department. Thus, even before he began undercutting Tillerson via Twitter and other forms of media, Trump had sent the world a clear message that Tillerson was not in charge of foreign policy nor even of his own subordinates. Not since William Rogers has a secretary of state been so publicly reduced in status as a policy maker. But at least Rogers managed his department and its operations as he saw fit, and he was widely respected within State and in Congress.

This relationship is two-way. It was no secret at State that Cyrus Vance held President Carter in fairly low regard, but in those days “the building” protected the Secretary’s private remarks. That world is gone. Tillerson’s crude assessment of his president makes both his tenure in office and his effectiveness while there fragile, to say the least. It says much about the state of Washington politics that Tillerson is still in office after such a gaffe. Perhaps the President does not want to face a major staffing issue at this time, but he doubtless will neither forget nor forgive.

Tillerson is not alone in the administration in his strained relations with the White House. But the transparent lack of understanding between Trump and Tillerson damages the ability of the United States to pursue its policy goals around the world or even to communicate what those goals may be. This is far less true at the Pentagon, as the president has given Secretary Mattis much greater (although inadequate) freedom of action. Foreign governments are acutely sensitive to Washington power games. Many now concentrate their attention on members of the presidential family and entourage or on Congress, or have abandoned active diplomatic engagement with the United States for the time being.

Obviously, this is not what Rex Tillerson, with his standing as a giant of American industry, would have anticipated or agreed to had he known what was in store. Perhaps by way of compensation, he has devoted considerable attention to restructuring his department, but in a self-defeating manner. There is no question the State Department needs reform. The bureaucratic structure is not just flabby, it is obese. Excessive layering and duplication (indeed, multiplication) of roles among regional and functional bureaus plus scores of “special” offices have created a department of Hapsburgian complexity. (To be fair, both the National Security Council Staff and the Office of the Secretary of Defense also warrant drastic downsizing.) While secretary of state, Henry Kissinger directed American global policy and programs with a bureaucratic structure roughly one third of what now exists. Rex Tillerson could do a good deed for the State Department by initiating major reform.

Unfortunately, Tillerson treats his department and the Foreign Service as adversaries rather than as partners in the process of reform. Tillerson has effectively walled himself into a secluded suite of offices with a small team of associates which, by most accounts, communicate with the rest of the Department poorly when they bother to communicate at all. Whatever may be the White House demands for staff reductions at State, it is the job of the secretary to lead his institution in making changes, however painful. Unfortunately, a glaring Tillerson deficiency—and one he cannot blame on the President—is in leadership. He is accustomed to command, but what is needed is a secretary who can lead. I can testify that the State Department and Foreign Service respond very well to leadership, even when it involves drastic changes in policy (as it did under Haig) or upheavals to people (as it did under Rusk and Rice). If anything, State is too compliant with new leadership but performs very poorly with none.