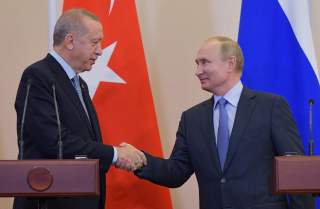 While the United States and Iran edged to the brink of war in Iraq, Russian president Vladimir Putin met with Turkish president Recep Tayyip Erdogan in Istanbul on January 8 to launch the long-awaited TurkStream gas pipeline and announce a new Libya ceasefire deal.

Two days later, Moscow and Ankara announced that they had reached another ceasefire agreement for Idlib, the last rebel bastion in Syria which had been facing an offensive from pro-Assad ground forces and Russian air support.

This latest meeting between Putin and Erdogan comes amidst rising tensions between Ankara and Washington, two longtime NATO allies. The United States has angrily protested Turkey’s decision to purchase the S-400 air defense system from Russia and its military operation in northeastern Syria. For its part, the Erdogan administration has threatened to close two major American military bases in Turkey if Congress adopts a much-anticipated sanctions package targeting Ankara.

What does the growing rift between the United States and Turkey mean for Russia? Can Moscow and Ankara transform their burgeoning cooperation into a fully-fledged-partnership or will their disagreements over Syria and Libya prove to be too much? The National Interest spoke to Turkish and Russian experts to get their perspectives on these questions.

At the opening ceremony for the pipeline, Putin depicted Russia and Turkey as forces for stability in the Middle East, which is still reeling from the assassination of Iran’s Maj. Gen. Qassim Sulemani by the United States.

“We live in a complicated world, and unfortunately in the region where we are located, we are seeing more indications that the situation is being further aggravated,” he said. “But Turkey and Russia are modeling completely different behavior—an example of interaction and cooperation for the benefit of our peoples and the peoples of Europe, and the whole world.”

The TurkStream pipeline is part of Russia’s effort to step up its gas exports to Europe. The pipeline will transport up to 31.5 billion cubic meters of Russian gas annually to Turkey and Southern Europe through the Black Sea. The United States has threatened to sanction Turkish companies involved in the TurkStream project, contending that the pipeline strengthens Europe’s energy dependence on Russia.

Putin and Erdogan also offered to broker a ceasefire between the warring sides of the Libyan civil war that went into effect at midnight on January 12. Russia and Turkey have in recent months emerged as major players in the eight-year-long conflict. Ankara supports the UN-recognized government of Fayez al-Sarraj in Tripoli, with the Turkish parliament voting earlier this month to send troops to aid Sarraj. Although Moscow does not formally back the eastern Libyan government of Field Marshal Khalifa Haftar, reports have emerged of Russian mercenaries fighting alongside Haftar’s troops.

Although Haftar initially spurned the ceasefire deal, he eventually relented a few days later. On Monday, Haftar and Sarraj arrived in Moscow for peace talks.

Once bitter rivals, Russia and Turkey have seen their relationship rebound over the past few years. Turkey concluded a deal to acquire Russia’s elite S-400 air defense system, with the first shipment arriving this past summer. In October, Putin and Erdogan signed an agreement to clear northeastern Syria of Kurdish militias and establish a joint patrol zone.

The emerging partnership between Moscow and Ankara has caused alarm in Washington. On December 11, Secretary of Defense Mark Esper accused Turkey of withdrawing from NATO’s orbit in favor of cooperating with Russia.

On the very same day, the Senate Foreign Relations Committee voted in favor of a bill to impose sanctions on Turkey over its purchase of Russian S-400s and its military operation in northeastern Syria. Some of the major provisions of the legislation include sanctions against senior Turkish officials, sanctions against a major Turkish bank, restrictions on arms sales to Turkey, and a report on the net worth of Erdogan and his family.

Erdogan reacted angrily to the potential sanctions. He warned that if the bill were signed into law, then Turkey would evict American forces from Incirlik Airbase, which houses around FIFTY U.S. nuclear missiles, and Kurecik base, the site of a NATO radar station.

The Turkish president’s threats are not empty bluster, said Mesut Caşın, a professor of international relations at Yeditepe University in Istanbul. He told me that sanctions could have an “earthquake effect” on the decades-long U.S.-Turkish alliance.

“If you give us these sanctions, Turkey may decide to close the Incirlik and Kurecik bases. This is the reality,” Caşın said.

But Ankara’s response is not likely to stop there. Caşın explained that Turkey would respond to growing pressure from the United States by drawing closer to Moscow and Tehran. According to him, some immediate options for Turkey would be to sign a deal to acquire Russian Su-35 fighter jets and buy more aircraft engines from Russia.

“Even if Turkey loses, the United States will suffer the most damage [from sanctions],” Caşın argued.

In Moscow, however, there is broad skepticism about Ankara’s willingness to break with the West.

“I don't think anyone in Russia seriously expects Turkey to abandon its obligations before NATO and break off its alliance with the United States. I have not heard anyone who thought this was possible,” said Fyodor Lukyanov, Editor-in-Chief of Russia in Global Affairs magazine.

Lukyanov argued Erdogan’s rift with Washington over the S-400 was less about his desire to align with Russia, and more about demonstrating Turkey’s foreign policy independence. Nevertheless, he admits that Ankara’s recent moves offer an opportunity for Moscow to draw closer to the longtime American ally.

“There are absolutely no illusions about Turkey becoming an ally of Russia. But that Turkey is changing and that it feels constrained within NATO, that is obvious," Lukyanov said.

Despite their long-standing and sometimes heated differences over the Syrian Civil War, Russia and Turkey have recently stepped up their cooperation in managing the conflict. According to Lukyanov, this new partnership is a marriage of necessity.

“The reason [for increased cooperation] is not shared interests or mutual trust between the two sides. In my view, there is neither,” he said. “But Moscow and Ankara understand that without some joint action and compromise, neither Russia nor Turkey will be able to achieve what they want in Syria.”

While the stakes are smaller in Libya for both countries, Putin and Erdogan are likewise eager to avoid confrontation over the North African nation, explained Kirill Semenov, a Middle East expert at the Russian International Affairs Council.

“Russia supports to Haftar, but it does not support him so much as to provide him victory. Furthermore, Moscow understands that it can't grant him victory,” Semenov said.

“Libya is not a major problem for Russia and Turkey. On the contrary, there is an opportunity for both Russia and Turkey to take a more active role in the Libya process. It is even possible that they hope to push other countries out of the process by playing to one another.”