RIP INF: The End of a Landmark Treaty 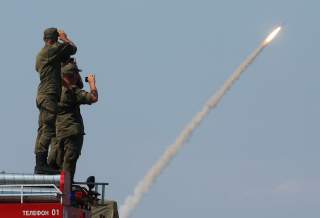 President Donald Trump announced at a campaign rally on October 20 that the United States would withdraw from the Intermediate-range Nuclear Forces (INF) Treaty. During his October 22–23 visit to Moscow, National Security Advisor John Bolton confirmed that the president intended to withdraw from the treaty.

The treaty was already on life support. Trump is pulling the plug, and the United States will exit the agreement six months after it gives formal notification. Russia bears primary responsibility for the treaty’s demise, but both Europe and the United States could have done more to try to save it.

Soviet deployment of SS-20 intermediate-range ballistic missiles in the mid-1970s gave rise to concern in Europe about a gap between U.S. and Soviet INF capabilities. In 1979, NATO adopted the “dual-track” decision: the Alliance agreed to deploy U.S. intermediate-range missiles in Europe while the United States sought to negotiate limits on such missiles with the Soviets.

Early rounds of the INF negotiations yielded little progress. The Soviets walked out in 1983 after the first U.S. missiles arrived in Britain and West Germany. The talks resumed in 1985. This time, they produced agreement. Ronald Reagan and Mikhail Gorbachev signed the INF Treaty in December 1987.

The INF Treaty banned all U.S. and Soviet land-based cruise and ballistic missiles with ranges between 500 and 5,500 kilometers. It entered into force in summer 1988. Three years later, the United States and Soviet Union had destroyed almost 2,700 missiles as well as their launchers, all under the most intrusive verification measures ever agreed, including on-site inspections. It was rightly called a landmark agreement.

Moscow appeared satisfied with the treaty’s performance up until the early 2000s. Senior Russian officials then began to express concern that, while the United States and Russia could not have intermediate-range missiles, third countries could. (The exceptions were Belarus, Kazakhstan and Ukraine, which, like Russia, remained party to the INF Treaty after the Soviet Union’s collapse.)

Third countries such as South Korea, North Korea, China, India, Pakistan, Iran, Saudi Arabia and Israel have developed and deployed intermediate-range missiles, with China producing hundreds. Each of these countries is geographically much closer to Russia than it is to the United States.

So one can understand the Russian concern . . . up to a point. Moscow today has a large and improving military in addition to fifteen times as many nuclear weapons as any country other than the United States. It does not need to match third countries in intermediate-range missiles.

Even if the Kremlin leadership found the situation intolerable, it had an honest way forward. It could have invoked Article XV of the INF Treaty, which allows a party to withdraw with six months notice.

Moscow, however, choose a different path. It developed and deployed a land-based cruise missile of intermediate-range, identified in 2017 as the 9M729 (NATO designator: SSC-8). That violated the treaty’s central provision. When the U.S. government charged that Russia had committed a violation, the Russians stubbornly denied those allegation and accused the United States of three treaty violations (one Russian charge, involving the Aegis Ashore missile defense site in Romania may have some merit, but the other two have no basis).

Moscow professed fidelity to the treaty, in effect laying a trap into which Trump has now clumsily stumbled. By announcing the U.S. intention to withdraw, he has set in motion a train that will leave Washington and be seen as responsible for killing the treaty. In addition, withdrawal from the treaty will allow the Russians to deploy land-based intermediate-range missiles without constraint, missiles for which the U.S. military currently has no land-based counterpart. It will be a win-win for Moscow.

Russia thus bears the major blame for the treaty’s demise: it cheated. But U.S. allies in Europe and Washington itself could have taken more robust measures to steer Moscow back toward compliance and perhaps save the agreement.

U.S. officials first briefed their NATO counterparts about the Russian violation in 2014. From the public evidence, however, the leaders of NATO European members had little concern about that violation. None of them publicly complained about the treaty violation during or after their exchanges with Russian president Vladimir Putin.

Nothing suggests that European leaders raised the violation in private either. In spring 2017, after Russia had begun deploying the 9M729, I asked a senior official of a major European ally if his leader would raise the violation when meeting with Putin a week later. He said no with a shrug.

That silence sent a message—unintended, but a message nevertheless—to the Russians: Europeans didn’t worry much about the treaty violation or the 9M729.

Some analysts point to the concern expressed in NATO communiqués. That does not absolve European leaders from not speaking out individually about the Russian violation. Moreover, take take a look at the communiqué language.

In the September 2014 summit communiqué, two months after the U.S. government charged Russia with violating the treaty, NATO leaders said that “it is of paramount importance that disarmament and non-proliferation commitments under existing treaties are honored, including the Intermediate-range Nuclear Forces (INF) Treaty, which is a crucial element of Euro-Atlantic security. In that regard, Allies call on Russia to preserve the viability of the INF Treaty through ensuring full and verifiable compliance.”

The communiqué from the last NATO summit in July 2018 had tougher language: “Full compliance with the INF Treaty is essential. . . . Allies have identified a Russian missile system, the 9M729, which raises serious concerns. . . . A pattern of behavior and information over many years has led to widespread doubts about Russian compliance. Allies believe that, in the absence of any credible answer from Russia on this new missile, the most plausible assessment would be that Russia is in violation of the treaty. NATO urges Russia to address these concerns in a substantial and transparent way, and actively engage in a technical dialogue with the United States.”

That language was better, but it hardly amounted to a robust denunciation, and it was buried in paragraph forty-six of a seventy-nine-paragraph communiqué.

Although the INF Treaty applied limits globally, it focused on Europe. European leaders should have pressed Putin hard on the violation, publicly condemned it, and raised political heat on the Kremlin. Their silence contrasts oddly with the public criticism of Trump’s decision voiced in Berlin, Rome and Paris and undermines the credibility of pleas for Washington to remain in the treaty. To put it bluntly, if they didn’t care enough to call out the Russian violation, then why care so much if the United States leaves the treaty?

The U.S. response to the Russian violation could—and should—have been more forceful. The Obama administration sought to bring Moscow back into compliance, a worthy goal, but it applied little real pressure. Washington convened a meeting of the Special Verification Commission, the body established by the INF Treaty to address, among other things, compliance, only in November 2016—two years after charging a violation.

Pentagon officials described a range of military responses, including efforts to develop better defenses against cruise missiles, the European Reassurance Initiative to boost the U.S. military presence in Central Europe and the Baltics, and investments in new technologies to offset the Russian violation. These measures, however, were largely actions that the Pentagon would take in any case and which would continue even if Moscow corrected its violation. They did not create much incentive for a change in Russian policy.

The Trump administration stated on December 8, 2017—the thirtieth anniversary of the signing of the INF Treaty—that it also wanted to bring Russia back into compliance. It announced a three-pronged “integrated strategy” to do so: diplomatic steps, including convening the Special Verification Commission, creating a military research and development program for a U.S. land-based intermediate-range missile, and enforcing economic sanctions on Russian entities that had been involved in development and production of the 9M729.

This strategy showed no success. The Special Verification Commission met, but by his own admission, Trump has never discussed the violation directly with Putin. The U.S. government either made no effort to stoke up approaches by Allied leaders to the Kremlin or, if it did, then that effort fizzled. Why didn’t U.S. officials use the threat of withdrawal with Allies to persuade them to engage Moscow more earnestly and at the highest level?

As for military steps, research and development on a U.S. intermediate-range missile likely caused little concern for the Russians. Fielding a missile would take years and cost a lot of money, money that the Pentagon does not have. The Russians, moreover, surely understand that it would be difficult, if not impossible, for NATO to reach a consensus on deploying new missiles in Europe. Recalling the huge anti-nuclear protests in Germany, the Netherlands and other countries in the early 1980s, some in the Kremlin might well welcome the intra-Alliance turmoil if NATO were to consider new deployments.