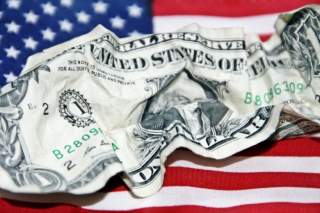 The Dollar’s value has appreciated dramatically over the past few months. There are a few other examples, but not many. The unprecedented climb in the early 80s and the Dollar’s run in the late 90s, for example. The steepness and rapidity of the appreciation of the Dollar has made it difficult for firms to react. And this could be a problem.

At first, this appears to be fairly simple macroeconomics. As the Dollar appreciates, the trade balance deteriorates as imports rise and export volumes come under pressure. However, global trade has become far more complex over the past couple decades with multinationals diversifying their supply chains globally. The assumption that foreign firms gain from an appreciation in the Dollar still generally holds true, but many foreign firms have moved production to the United States. By manufacturing in the United States, foreign firms miss out on some of the advantages of a depreciating currency.

At the moment, foreign firms producing goods in their home country and selling them to the United States have a distinct advantage. The translation of a Dollar sale into their domestic currency instantly appears to be better. They did not raise their price to the U.S. consumer, but still got more of their own currency for the appreciated Dollar.

The currency mechanism at work is called “pass-through,” and leaves firms on both sides with difficult decisions to make. For the foreign firm, the question is whether to cut price to gain market share. The foreign firm gains from the depreciation of its currency, but also gains from undercutting the domestic firm’s pricing.

For the domestic firm, the decisions are more painful. The domestic firm does not have the benefit of translating the currency and receiving a paper gain. Instead, domestic firms are forced to react to the lower pricing from foreign competitors in their domestic markets, and absorb some of their currency appreciation when selling abroad (or be forced to raise prices). Neither of these are positives for the domestic economy. Firms forced to cut price tend to cut people as revenues and profit margins come under pressure. This is the ugly side of an appreciating currency—the importation of deflation and wage pressures.

And falling oil prices do not help.

The amount of the depreciation or appreciation passed through to the consumer is an important factor in U.S. GDP. Its impact is seen not only in “net” export numbers, but also through investments businesses choose to defer and the number of employees they hire.

It is worth noting that the rally in the Dollar is partly due to the relative strength of the U.S. economy to others globally. This has allowed monetary policy in the United States to become less accommodative than those of many other nations. This divergence strengthens the Dollar. But the U.S. economic boom is—or was—driven by domestic oil production. While not over, the falling oil price has called into question the future growth of the industry. Previously, the United States may have benefitted from a stronger Dollar through lower input prices, and from lower transportation costs through a reduced cost of imported oil. Now oil is domestically produced, and the associated costs are in USD. From a GDP perspective, the savings primarily flow through as increased personal consumption, not imports.

The fourth-quarter GDP report reaffirmed what many economists had suspected about lower oil prices and the U.S. consumer—it is a positive for a large portion of the economy. The widely expected acceleration in personal consumption to 4.3 percent drove growth. With oil declining, consumers have more money to spend on other things, and they are buying.

But these gains were offset to some extent by the dynamics of imports and exports, and the report showed a weakness that many economists did not anticipate to see this soon. Typically, there would be a lag to the effect of the rising Dollar on the economy. This time around, however, the effects appear to be flowing through to the real economy much more swiftly. In the fourth quarter, exports increased only slowly, and imports jumped drastically, subtracting slightly over a full percentage point from GDP growth. Lower oil prices began to have an impact on investment in equipment. And the deflationary pressures are being felt with the price index for GDP flat from the third quarter, and well below expectations. The combination of lower oil and an appreciating Dollar are already being felt, and the pressures may strengthen.

While there are benefits to lower oil and a strong U.S. Dollar, there are also downsides. The question of how imports and exports will react appears to be answered. With exports falling as U.S. companies struggle to remain competitive abroad, they may also find increasing levels of competition domestically. The United States will continue to outperform the rest of the world economically, but this could be bad for domestic firms. As foreign firms seek out a place to sell—the combination of an appreciating Dollar and strong economy will look far too enticing. The durability of the U.S. economy may be tested sooner than some people think. Low oil prices and a rising Dollar may be a positive for the economy in terms of consumer consumption. But on the aggregate, the United States may find itself under a competitive threat it did not see coming quite so quickly.