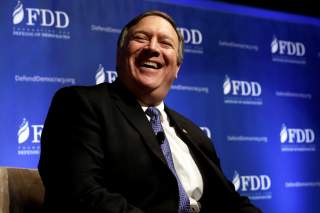 Something remarkable can be said of Tuesday morning’s news that Rex Tillerson has finally been ousted as secretary of State in favor of Mike Pompeo: it didn’t leak ahead of time.

Indeed, all early indications are the decision may have been made in the last twenty-four hours, if not a shorter time period. At the very least, the timing stunned the State Department, or so it says.

“The Secretary did not speak to the President this morning and is unaware of the reason, but he is grateful for the opportunity to serve, and still believes strongly that public service is a noble calling and not to be regretted,” says State spokesman Steve Goldstein. A host of signs point to Rex Tillerson learning of his firing from the president’s tweet announcing the move.

A source familiar with the matter notes that Tillerson had just returned from Africa Tuesday morning.

Her Twitter activity in recent days—vociferously bashing the Assad regime and weighing on a host of global issues—is not of someone whose departure seemed imminent.

Other outlets, including Fox News, say Tillerson was told Friday, but not by the president himself.

Regardless, the firing is most similar to the announcement of Chief of Staff Reince Priebus’ ouster last August, when the president suddenly tweeted on a late Friday afternoon that the ex-RNC chief was out, and former Gen. John Kelly was in. That news also did not leak ahead of time. Otherwise, this has been the most porous White House in history.

A comment from Tillerson from last October now seems prescient: "The president is a very unconventional person, as we all know, in terms of how he communicates, how he likes to create action-forcing events. And so the president often takes steps to force an action when he feels things are just not moving."

Notably, Tillerson contradicted the White House on Monday on Russia.

While spokeswoman Sarah Sanders wouldn’t say whether the administration faulted Moscow for the recent nerve agent poisoning in London, Tillerson was unequivocal, saying the attack “clearly” emanated from Russia.

But the president himself cited the Iran deal in remarks Tuesday. “We disagreed on things. When you look at the Iran deal, I think it was terrible, I guess he thinks it was OK,” said Trump.

An administration source familiar with the matter agrees: “This had more to do with Iran than Russia.”

A Previously Scuttled Plan Is Executed

Pompeo had first been floated for the job since last fall.

Indeed, the National Interest was among the first to report the potential plan, noting his ascension could please White House insiders, the Republican neoconservative establishment and the populist-nationalist allies of former White House Chief Strategist Steve Bannon.

Indeed, Bannon signaled his pleasure Tuesday calling this “the end of the globalists.” Many in this orbit, including the communications strategist Arthur Schwartz (who has advised and spoken for Bannon), hailed the move.

At the same time, William Kristol, Weekly Standard editor-at-large and the most prominent neoconservative intellectual in America, told me last year that he not only loved the idea of a Secretary of State Pompeo, but that he thinks Pompeo should run for president in 2020.

Failing that, Kristol himself is also considering a run, appearing at a staple political event in New Hampshire later this month. “On the one hand, McMaster (NSA), Pompeo (State), Mattis (Defense), Haley (UN) and [Gina] Haspel (CIA) [Pompeo’s tapped replacement]—and for that matter Kelly (COS)—is an excellent foreign policy team. On the other hand, Trump is POTUS,” Kristol tweeted Tuesday.

Tillerson’s ouster—and the Pompeo succession plan—seemed imminent in December, when a New York Times story on the subject gained buzzed and prompted Trump to declare, unconvincingly, of Tillerson’s future: “Rex is here.”

Bannon told me Tillerson would be out by late January.

But the new year came, and the landscape was shaken up. Michael Wolff’s Fire and Fury discombobulated the White House. For a while, it looked like Tillerson could hold on for some time, my sources in the State Department told me, before eventually being replaced by Pompeo.

But Pompeo was so transparently readying for the job, at some point, that he’d already looked into hiring people. I was the first to report late last year that Juan Zarate, a former Bush 43 official and part of just about every think tank in town (Foundation for the Defense of Democracies, the Center for Strategic and International Studies and his own Financial Integrity Network), would be Pompeo’s likely number two. Zarate led a hero’s welcome of Pompeo at the St. Regis last fall at an FDD event I sat courtside at. “There's no secret here: I'm not an unbiased journalist. I'm a fan of this director. I worked on his transition,” said Zarate. “Frankly, I love the man.”

Zarate, the first ever assistant secretary of the Treasury for terrorist financing and financial crimes (a position created after 9/11), wields considerable international influence with his Financial Integrity Network, getting to see the books of major corporations and Middle Eastern countries. His book Treasury’s War is the industry standard for this budding intersection of money, international politics and the prevention of violent extremism.

And for now, the president is back in the driver's seat and leaning toward hardliners: preferring vociferous Iran deal critic Pompeo to Tillerson, protectionist Peter Navarro to globalist Gary Cohn. In the Trump White House, nationalism is ascendant.