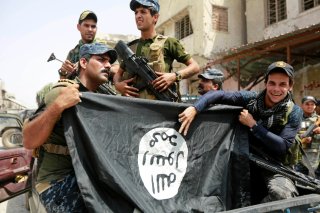 PRESIDENTS JOE Biden, Donald Trump, and Barack Obama agreed on few things, but all sought to make counterterrorism less central to U.S. foreign policy and instead focus on China, Russia, and other great powers, citing their dangerous military capabilities and desire to upend the U.S.-led international order, among other troubling actions. Indeed, with Biden’s withdrawal of U.S. forces from Afghanistan in August 2021 and Russia’s invasion of Ukraine in February 2022, it seemed like the counterterrorism era had finally ended and the era of “strategic competition”—to use the words of the Biden administration’s interim national security guidance—had formally commenced.

Not quite. Confronting major powers, especially Russia, to say nothing of smaller powers like Iran, also requires counterterrorism tools, but what that means in practice differs considerably from the fight against the Islamic State (often referred to as ISIS), Al Qaeda, and similar non-state groups. Terrorism linked to great powers is usually part of broader destabilization campaigns and proxy wars, so basic counterterrorism tools like intelligence cooperation and training local security forces remain vital. The challenges, however, pose different dangers—and require different responses—from traditional forms of terrorism, and the risk of escalation is high.

TO BE sure, state-sponsored terrorism is hardly new. During the Cold War, the Soviet Union and its communist allies established ties to a range of terrorist groups around the world to undermine pro-U.S. regimes, sow discord in NATO countries, and otherwise further their objectives. Moscow and other communist states also used their agents to assassinate dissidents. Mao’s China, for its part, tried to spread its revolutionary message in the developing world, offering money, weapons, and training to its acolytes as was a model for insurgent action. Abimael Reinoso Guzmán, who founded the terrorist and insurgent group Sendero Luminoso in Peru, was among those who came away inspired after his visit to China in the 1960s.

In the post-Cold War era, U.S. attention focused on countries like Iran, Pakistan, Sudan, and others that backed—and in cases like Iran and Pakistan, still back—an array of terrorist groups that have attacked both the United States and its regional allies like Israel and India. At times, the sponsors’ motives are ideological: Iran supported numerous groups after the 1979 revolution as part of its plans to export its theocratic system and topple regimes it deemed ungodly. In other cases, supporting terrorists helped unpopular regimes shore up their domestic credibility. Syria worked with (but often undermined) an array of Palestinian groups in order to champion its claim to being “the beating heart of Arabism.”

The United States also frequently labels the assassination of dissidents abroad as terrorism. In addition to support for groups like Hezbollah that blew up U.S. military and diplomatic facilities, Iran also assassinated members of the former regime, Kurdish leaders in exile, and others who opposed the clerical government. The Trump administration returned North Korea to the list of official state sponsors of terrorism in part due to the regime’s killing of the Great Leader’s half-brother in Kuala Lumpur in 2017. When allies do the same thing, however, the “t” word is not used, such as when the Saudi government assassinated critic Jamal Khashoggi in 2018 at a Saudi consulate in Turkey.

More often, however, states have backed terrorists for strategic reasons. Pakistan supported jihadi groups to counter India and dominate Afghanistan. Syria allowed jihadists to cross its territory and enter Iraq to weaken the U.S. position there after the 2003 U.S. invasion and occupation. Even Iran’s once-ideological foreign policy has become more realpolitik, with the Islamic Republic supporting groups in Iraq, Lebanon, Yemen, and elsewhere to counter Saudi Arabia, weaken U.S. influence, strengthen its hold on regional states, and project power against Israel, among other strategic objectives.

For many regimes, working with terrorist groups gives them deniability, or at least its veneer. Iran’s links to Hezbollah, Pakistan’s links to Lashkar-e Taiba, and similar connections are well-known, but having the terrorist group kill and sow mayhem allows its paymaster to claim it was not involved. Even many victim states prefer this fiction to the risks inherent in confronting the sponsor, which might mean military action or even all-out war.

Today, when major powers get into the act, they often follow the logic of lesser powers, but at a greater scale and with more complications for the United States and its allies. Ideology, however, is not a factor for today’s major powers. Rather, they seek to use terrorist and other non-state groups as part of proxy warfare, trying to subvert various regional governments, increase their influence over parts of countries they see as falling within their spheres of influence, throw spanners in the works of U.S. security efforts, and undermine the West in general. At times their support is linked to domestic political disputes, such as the assassination of dissidents. Deniability, at times credible given the opacity of some relationships and at times simply a convenient diplomatic fiction, allows them greater freedom of action than if they used their own operatives.

In contrast to countries like Iran and Pakistan that rely heavily on terrorist groups to do the lifting for their foreign policies, major powers have a wide range of other options, and support for terrorism is done in tandem with other foreign policy instruments, such as cyber operations or conventional military operations, as part of a broader campaign. They can also use their diplomatic power to impede U.S. counterterrorism, as China has done by blocking the designation of Pakistani groups at the United Nations in order to hinder Indian counterterrorism.

RUSSIA’S FAR-RANGING activities offer one guide for how great powers might incorporate support for terrorism into their foreign policies. Even after the invasion of Ukraine when Washington was condemning Moscow on a regular basis, the United States did not call Russia a sponsor of terrorism, but many of its actions fit into that category. China, so far at least, seems far more focused on crushing domestic dissent than on supporting terrorists and insurgents abroad, though India claims Beijing supports separatists in northeast India. As competition with the United States heats up, however, Beijing could change, and the Russian model is useful not only for what it says about Moscow’s current approach to terrorist groups, but also how other major powers might use them.

It’s easy to dismiss such actions as simply violent domestic politics or, in the case of Chechen leaders, aggressive counterterrorism. Russia, however, has also worked directly with terrorist groups designated by the United States, as it did with the Lebanese Hezbollah in Syria. Russia formally intervened in the bloody civil war in 2015, but Hezbollah’s forces had been fighting on behalf of their Syrian ally almost since the war’s inception in 2011 and proved to be among the regime’s most formidable defenders. Russian airpower, artillery, and special forces coordinated with Hezbollah to defeat opposition forces, and during the fighting, they even established joint operations centers. As the Assad regime has gained the upper hand, Russia has encouraged Hezbollah to keep its forces deployed to Syria.

In Ukraine, Russia has worked with separatist militias against the Kiev government, which it sees as moving too close to the West. In 2014, Ukrainian separatists, with Russian arms and money as well as several thousand “volunteers,” seized cities in eastern Ukraine and declared independence for the Donetsk and Luhansk People’s Republics. Dutch investigators found that Russian-backed separatists in Ukraine shot down a Malaysian commercial flight passing over the country, killing all 283 people aboard. The missile belonged to the Russian 53 Anti-Aircraft Missile Brigade, which was based in Kursk near the Ukrainian border, and Russian officials smuggled the missile to their Ukrainian separatist allies. While Russian activities in Ukraine have received the most attention, Russia has backed other separatists in its near abroad in Abkhazia, South Ossetia, and Transnistria.

Even in places far from Russia where the Moscow government does not have territorial concerns, ties to militant groups give it ways to weaken the United States and other foes. In some places, as with Russia’s cooperation with Hezbollah in Syria, militants are simply forces on the ground to be exploited.

As Moscow’s support for separatist militias suggests, much of what constitutes support for terrorism is part of a proxy civil war. By acting through Ukrainian militias, Russia can maintain a degree of deniability, however implausible, that allows it to claim it is not involved in the war—in sharp contrast to its February 2022 invasion, which compelled the United States and Europe to try to punish Moscow and aid Ukraine. In addition, such non-state efforts are less costly in both human and financial terms: the Ukrainians do the bulk of the fighting and dying. Hezbollah is an impressive fighting force (it has repeatedly held its ground against Israel’s formidable military); bolstering its fighting power is a militarily logical way to defeat Syrian rebels at less cost to Moscow.