Ronald Reagan, Firing Line, and the Triumph of the Right 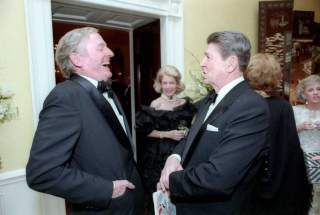 Editor’s Note: The following was adapted from Open to Debate: How William F. Buckley Put Liberal America on the Firing Line by Heather Hendershot. Copyright © 2016 by Broadside Books. Used by permission.

Almost thirty years after completing his two terms as presi­dent, Ronald Reagan remains the left’s archvillain and the right’s shining hero. To many of those of a younger genera­tion who did not live through the 1980s he is simply known, for better or for worse, as a tax-cutting cold warrior, the “great communicator” of the “greed-is-good” decade. The elements of the Reagan myth are easy enough to pinpoint. He was the smil­ing, mild-mannered, apple-pie guy, a fellow who, as Buckley pointed out in his commemorative column when Reagan left office, earnestly used words like Hades and keister. It was hard for interviewers to get past Reagan’s G-rated surface. Buckley did not succeed where others had failed. That is, Reagan’s Fir­ing Line appearances did not reveal the man beneath the cold warrior. But then that was never Buckley’s intention.

Journalist George Packer once observed, “It is notoriously hard to write about Reagan.” Allowed “unprecedented access to the President while he was still in the White House,” Packer continued, his biographer Edmund Morris “was so defeated by Reagan’s opacity and quips that he resorted to fictionalizing.” An uncharitable reader of Buckley’s final (second posthumous) book, The Reagan I Knew, might also perceive some fictional elements therein—the product, arguably, not of imaginative spirit but of selective memory. But whether you come to the book as a friend or enemy of Reagan (or of Buckley, for that matter), there is no denying that Buckley never found it “noto­riously hard” to write about his old chum.

Of course, Buckley was not interested in psychologizing. His Reagan book includes a bit of newly written material, but it is mostly a selection of correspondence revealing Reagan as personable and—more important—showing his political posi­tions. We also see a bit of Buckley’s flirtatious correspondence with Nancy Reagan, though this is kept on the tasteful up-­and-up. For the most part, The Reagan I Knew is a straight-up homage to the man who brought the right-wing conservatism that Buckley had been promoting for so many years—in his columns, in his speeches, in his books, on his TV show—to the White House. By the time Reagan left office, in fact, “right­wing conservatism” had become “conservatism” tout court.

Reagan himself appeared as a guest on Firing Line seven times over the years (and was featured in clip reels on four addi­tional episodes). And, of course, Reaganism suffused the show throughout the 1980s. Put another way, Buckleyism infused Reaganism, and Reaganism infused Firing Line; for let us not forget that Buckley liked to say he had been advocating “Rea­gan’s” policies back when Reagan was still a liberal. On a 1981 episode with John Kenneth Galbraith, the question is raised as to whether or not Buckley will approve of Reagan’s plans to increase military spending. Buckley responds, with both hu­mor and irritation, “Now the question is: will the Reagan ad­ministration agree with me? I started it all. . . . I came out for rearmament when Reagan was a member of the ADA [Ameri­cans for Democratic Action], so cut that out!” Buckley may have been conservative before Reagan, but Reagan obviously caught up—in part by being a charter subscriber to National Review.

Looking back, at first glance it seems to make sense that Reagan and Buckley would become friends. Reagan had once described himself as “a near-hopeless hemophiliac liberal,” re­ferring presumably to his early sympathy for FDR, his ADA membership, and his status as a registered Democrat until 1962. He had never really been any kind of raging left-winger. But he had been a liberal who had gone right, and Buckley’s circle was amply populated with such converts.

Reagan had been president of the Screen Actors Guild in the 1940s and ’50s, and he had been a friendly HUAC witness, but the notion that he would become a full-time politician did not come into focus until a few years later. His movie career stalled, Reagan began doing more TV work in the 1950s. By 1954, Reagan was on General Electric’s payroll, hosting their General Electric Theater TV series, appearing in GE advertise­ments, and giving speeches on free market conservatism to GE factory workers.

Lest it sound as if Reagan was floundering, I hasten to add that his GE salary was $125,000—that’s worth $1,100,000 in 2015 dollars, though in the spirit of Reagan I should proba­bly add that the 125K from GE was his pretax income. Soon, his audiences expanded to include Rotary club men, Elks club members, Chambers of Commerce, the National Association of Manufacturers, and so on. As one historian sums it up, “Reagan went to General Electric as a failed movie actor tired of working the Las Vegas circuit. He left poised to begin his political career.” And, indeed, he would hit the big time with his half-hour “A Time for Choosing” TV speech for Goldwater in 1964, which positioned him to become governor of Califor­nia a few years later. National Review assessed the speech as “probably the most successful single political broadcast since Mr. Nixon’s Checkers speech of twelve years ago.”

Politically, Reagan and Buckley were an obvious match. As speakers and writers, though, they were something of an odd couple. Yes, each could, in his own way, charm the pants off an audience. But Buckley was an intellectual force, a wordsmith of an obviously intellectual bent, while Reagan was the square politician whose deeply conservative ideas were delivered in a cornpone wrapper. Perusing his letters to Buckley, one rarely spots a moment of rhetorical panache. At one point, Reagan references his fatigue with delivering after-dinner political speeches to the “mashed potato circuit.” That seems like a mildly clever descriptor for the purgatory Reagan had once en­dured, until he uses it a second time in a letter to Buckley, and then during the Firing Line Panama Canal debate with Buckley in 1978, and even in the course of a milquetoast interview with Merv Griffin in 1983.

Reagan had made an awkward, stilted appearance on Milton Berle’s TV show in 1953; he could not match pace with Berle’s comic timing. But if he had one thing in common with “Mr. Television,” it was a propensity to reuse crowd-pleasing material. Reagan had terrific timing and delivery, his emotional tone was pitch-perfect, and he knew how to read his audience. Although he had a knack for quick comebacks, he generally worked best off of prepared material. Pushed off-script, he would sometimes flounder until he found the canned anecdote that fit the occasion.

Notwithstanding his reliance on prefabrication, Reagan could generally come up with quick retorts, crack hokey jokes that felt sincere, and keep his cool on TV, and specifically on Fir­ing Line, better than most politicians. (In stark contrast, George H. W. Bush displayed his own rather short fuse on Buckley’s show, though in 1988 this was no doubt purposeful, to show that the presidential contender was not a “wimp.”)

Reagan was the consummate showman, but what was be­neath the surface? After a campus visit in 1968, an article in the Yale Alumni Magazine remarked upon Reagan’s “cordiality and vacuity.” If he were to run for president, the authors specu­lated, “he would do better with the mass electorate than Barry Goldwater did, if only because he is the master of an electronic age while Goldwater was the relic of an oral one.” The authors further noted that “the governor makes you like him. He is one of the smoothest politicians on the hustings, with an All-American image of openness and sincerity.”

He was charming, and he was quick. But erudite he was not. Jessica Mitford’s take-down profile, released in Ramparts magazine on the occasion of Reagan’s 1965 autobiography, was as hard on Reagan’s prose as it was on his political positions, and really, finding banality in this book was like shooting fish in a barrel. Here’s one painful zinger that Mitford highlighted: “Since my birth I have been particularly fond of . . . red, white and blue.” She even noted that an army buddy was astounded by Reagan’s seemingly boundless passion for articles in the blandly conservative and middlebrow Reader’s Digest.

Obviously, Reagan’s aw-shucks persona was a key part of his mass appeal, but this does not explain how he excelled on Fir­ing Line or was befriended by Buckley. What drew Buckley to a man like Reagan, apart from his politics? Clearly, Buckley could respect such a man from an ideological angle, but how could he put up with his corny patriotism? His casual use of football refer­ences to explain politics? (On the need to wait before evaluating Nixon’s China initiative: “There are times in which you have to get a good field position before you can throw the long pass.”) His goofball film references? (After thirty-nine American hos­tages were released in Lebanon, in 1985: “Boy, I saw Rambo last night. . . . Now I know what to do the next time this happens.”)