Rough Waters Ahead: How to Maximize the Power of the U.S. Navy's Surface Fleet 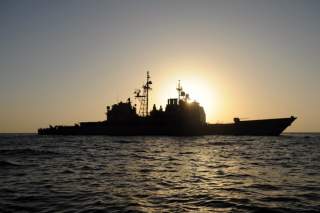 The U.S. Navy faces a daunting future environment. Flat defense budgets, improving adversary capabilities, growing instability and a defense strategy that portends additional responsibilities all conspire to challenge the fleet’s capability and capacity. At the same time, its backbone—the surface force of cruisers, destroyers and smaller combatants—is at a decision point.

The family of futuristic ships Navy leaders planned to field during this decade is now cancelled or truncated with the recent decision to stop building Littoral Combat Ships (LCS). The Navy cannot afford to develop a new family of ships, because its shipbuilding plan is several billion dollars a year underfunded, compared to historical levels of spending. It also cannot afford to build more of today’s ships to replace those acquired during the Reagan era that are reaching the end of their service lives. The size of the fleet will almost certainly decline, its capabilities may fall behind its rivals, and yet that fleet must operate across seas that are growing no smaller in pursuit of national objectives that are growing no less important.

The most important of these objectives is to deter or prevail in conflict. In that, the Navy’s first responsibility is to gain and sustain access for the joint force. America’s potential enemies, however, are fielding military systems designed to deny U.S. forces the freedom to operate—also known as Anti-Access/Area Denial (A2/AD) capabilities. This will require the Navy to again concentrate on sea control, or taking and protecting areas of ocean in the face of enemy land-based missiles, submarines, aircraft and surface ships.

Sea control has been taken for granted by America since the fall of the Berlin Wall. The U.S. Navy had a substantial margin of superiority over its competitors over the last twenty-five years and its surface fleet branched into new missions, such as ballistic-missile defense and counterpiracy, to stay relevant. Along the way, the surface fleet also took on a more defensive character than its Cold War progenitor. Navy planners assumed land-based patrol aircraft and carrier-based strike aircraft would conduct offensive sea-control operations to destroy enemy ships, submarines and aircraft while surface combatants defended the fleet against enemy missiles.

This division of labor should be reexamined in light of the vulnerability of patrol aircraft and the need for carrier-based aircraft to project power ashore in many of the scenarios for which U.S. forces currently plan. It is time for the surface fleet to give priority once again to being able to engage enemy ships, aircraft and submarines. But with the Navy’s fiscal constraints and the urgency of growing threats, this evolution will need to rely on modifications to existing ships and payloads, rather than building a new fleet out of whole cloth.

Getting more offensive power per ship

Several barriers stand between the surface fleet and its ability to command increasingly contested seas. Most significantly, improving adversary A2/AD systems such as anti-ship cruise and ballistic missiles are growing more capable and numerous, compelling surface combatants to devote more and more of their weapons capacity to air defense. Taken to a logical extreme, billion-dollar surface ships will not have enough defensive weapons to defeat all the million-dollar missiles an enemy is willing to launch.

Surface combatants must, therefore, be able to destroy enemy platforms before they can attack. To do so, the surface fleet will need a new concept for air defense that increases air-defense capacity while also freeing up more surface ship vertical-launch-system (VLS) real estate for offensive weapons. Today, the Navy employs a layered air-defense scheme that would use two of its longest-range and most expensive interceptors against each incoming anti-ship missile. Adding insult to injury, not only do ships risk exhausting their magazine of air-defense missiles, their missiles cost on average twice as much or more than the incoming missile cost the enemy.

Since the size of air-defense missiles is a function of their range, the first step to increase air-defense capacity is to contract the fleet’s air-defense umbrella from an over-100-mile range to roughly 30 miles. This would shrink air-defense missiles’ size and in so doing increase the number of them that can be carried on a surface combatant by a factor of four or more. It would also enable integration of air-defense systems that don’t rely on missiles such as electronic jamming and deception, lasers and electromagnetic railguns. These systems operate at 10-30 miles and could reduce the number of defensive missiles needed to defeat an attack.

Freeing up missile launchers creates an opportunity for surface combatants to carry more offensive weapons. The surface fleet’s current missiles, however, lack the range to attack enemy ships, aircraft and submarines outside the reach of enemy anti-ship cruise missiles (ASCM). The Navy is addressing this range shortfall against enemy aircraft and ships with new weapons, but these planned missiles should be smaller and capable of multiple missions to give each ship even greater badly needed offensive punch. Without such multimission weapons, a ship will need to come out of the fight to change its missile loadout if its mission changes, for example, from predominantly anti-air to anti-ship or to strike.

Getting more ships on offense

These measures will provide each ship more offensive weapons capacity. But the surface fleet must also take action to make more ships available for offensive operations. The Navy plans to retire the remainder of its twenty-two cruisers, each with 122 missile launchers, by 2029, unless it is allowed by Congress to take each out of service for several years as part of a phased modernization and life-extension program. The Navy’s plan would maintain eleven cruisers in the fleet continuously through the late 2030s, when new ballistic-missile submarines to replace the Ohio-class SSBNs will take up nearly half the shipbuilding budget and preclude the Navy building additional surface ships. This makes it essential that the Navy be allowed to implement this plan.

Making ships with VLS magazines available for offensive operations also requires that they not be tied up in defensive or maritime security operations. Today, the Navy has only half the number of small surface combatants—frigates, LCS, patrol craft and minesweepers—it says are needed. As a result, larger, VLS-equipped ships such as cruisers and destroyers are being deployed to chase pirates and train partner navies, the equivalent of delivering the mail in a Cadillac. Further, in times of heightened tension or conflict, cruisers and destroyers will be pressed into escort missions, because small combatants are unable to protect noncombatant ships (or themselves, in some cases) from air threats. To address these shortfalls, the Navy should equip some LCSs and the planned successors with air-defense capabilities that enable them to protect other ships, freeing up cruisers and destroyers for offensive sea-control operations. The Navy should also expand its efforts to use noncombatant ships, such as Joint High Speed Vessels, to conduct maritime security and training missions.

Given the Navy’s shortfall in small surface combatants at a time of enormous funding constraints, the Navy cannot afford a “clean sheet” new design for the ship that succeeds LCS. Instead, the replacement for LCS should itself be a modified version of the LCS. This would reduce the time to begin construction of the new ship and leverage the “learning curve” already achieved with LCS construction (now into the twenty-fourth ship). The modifications that would enable LCS to defend another ship from aircraft and ASCMs would also confer capabilities essential for it to contribute to offensive missions. In particular, the VLS magazine needed to employ the Navy’s longer-range air-defense weapons can also launch anti-ship and anti-submarine weapons. When coupled with the weapons improvements described above, this would provide the surface fleet with dozens of additional offensive sea-control ships.

The Navy and other Services are working to sustain the joint force’s ability to assure access, despite A2/AD threats and support partners and allies countering instability. With flat or declining budgets for the foreseeable future, the U.S. military needs to get the most out of each part of the force, including the surface fleet. Surface combatants can no longer be defensively focused platforms that depend on other parts of the force to fight back against ships, aircraft and submarines that attack them. The Navy should rethink traditional approaches to air defense, weapons development and maritime security so it can equip surface combatants to better defend themselves and increase their ability to outrange the enemy and conduct offensive operations. This will enable the surface fleet to command the seas and help sustain this nation’s interests, prosperity and security for decades to come.

Bryan Clark is a Senior Fellow at the Center for Strategic and Budgetary Assessments.

Bryan McGrath is Deputy Director of the Hudson Institute’s Center for American Seapower.