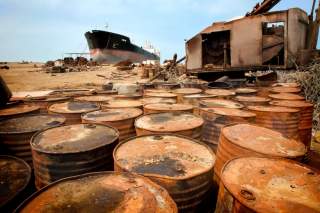 Though the peaceful transfer of power from Goodluck Jonathan to President-elect Buhari slated for May 29 should be cause for celebration throughout Nigeria, the crowds that assembled on the streets of Lagos and Abuja last week were more incensed than jubilant. While a deal was finally reached between the government of Nigeria and the wholesale fuel distributors to end the fuel scarcity that had hamstrung Africa’s giant, the terms of the agreement are unclear, and the negotiation process is opaque. Although the oil-tanker drivers and other oil workers who had gone on strike and those who waited in long queues at the few petrol stations that still had fuel during the shortage may be momentarily placated, the crisis sheds a critical light on the petro-corruption undermining the country’s success.

A shortage of fuel in Nigeria, Africa’s largest oil producer, ground the country to a halt. Schools, radio stations, mobile-phone companies, airlines and hospitals, all discontinued or reduced their services throughout the country during the shortage. A sharp devaluation of the Nigerian naira and the collapse of the global price of oil have significantly strained the Nigerian economy. The country produces over 2 million barrels of oil a day and roughly 70 percent of the government’s revenues come from oil; the near halving of the price of oil has crippled the “giant of Africa.” The problem has been compounded by the state of the domestic refineries: Nigerian oil refineries are out-of-date and neglected, which leaves the country dependent on exporting crude oil and importing a refined product. The fuel shortage was compounded by the reduced electrical capacity in the country; the Ministry of Power reported last week that the already-erratic and insufficient power supply in the country dropped from 4,800 MW to just 1,327 MW. Nigerian businesses include the cost of diesel electrical generators in their cost of doing business. However, the fuel shortage rendered these generators largely useless and shut down businesses throughout the country.

The irony of a country that collected over $50 billion in oil revenue in 2011 being short on gas has been widely noted; Nigerians themselves have satirized the situation on twitter, using #aintnobodygotfuelforthat to point out the ways that the fuel shortage has changed day-to-day life in the country. The fuel shortage came amid accusations from wholesale fuel vendors that the Nigerian government owes them some $1 billion for fuel and subsidies, charges that have supposedly been accruing since October 2014. A spokesman from the APC, President-elect Buhari’s party, accused the incumbent party, the PDP, of deliberately “sabotaging” the economy as Buhari is scheduled to take office. The Nigerian Finance Minister lays the blame at the feet of the wholesale vendors and has asked the Nigerian Central bank to verify their claims because “there has been so much fraud allegations and scams in the business of oil marketing.”

According the BBC’s Will Ross, “no-one gets to see how that [$1 billion] figure is worked out. Many government officials, including employees of the state fuel company, are so intertwined in the fraud it is hard to know who is scamming who.” The accusations levied by the fuel vendors are difficult for the government to dispute—simply because so little information concerning the country’s petroleum industry is released to the public. According to the Natural Resources Governance Institute, “the Petroleum Resources Ministry publishes little information on the upstream licensing process, fiscal and production arrangements, contracts, environmental impact assessments or operational data. It publishes no reports on revenues.” The deal that was struck between the Nigerian government and the oil wholesalers on Monday is similarly opaque; The Business Standard reported that Finance Minister Ngozi Okonjo-Iweala partially brokered the agreement and that the “outgoing government had made plans to pay more than $1 billion owed to the oil marketers, but following due process.” It is unclear what “due process” means within this context, however. Okonjo-Iweala has suggested that at least $800 million of the $1 billion the marketers claim they are owed must be “properly verified,” a thinly veiled accusation of corruption that illuminates the character of the Nigerian petroleum industry and the political economy of the fuel subsidy.

The fuel subsidy itself is a remarkably opaque institution in Nigeria. According the Brookings Institution, in 2011, the fuel subsidy program comprised 4 percent of the country’s GDP and 30 percent of the government’s expenditure. It’s estimated that the program costs $8 billion a year—roughly twice the amount that the government spent on healthcare and education combined. Unlike spending on healthcare and education, which have “developmental dividends” and benefit the poor, the fuel subsidy is largely a subsidy for those who consume the most fuel—the country’s middle and upper classes.

Yet, when President Goodluck Jonathan attempted to remove the fuel subsidy in 2012, “Occupy Nigeria” protests erupted throughout the country. The removal of the subsidy led to a virtual tripling in the price of fuel overnight, creating a huge strain on the nation’s economy. Regional observers marveled at the diversity within the coalition protesting the removal; reflecting on the movement, CNN reported:

“In a country factionalized along ethnic and religious lines, the movement defied all odds. In Lagos, for example, a radical fiery Christian preacher, Tunde Bakare of the Save Nigeria Group, anchored the protests. In Kaduna, the protests were led by Shehu Sani, a veteran activist and Muslim of the Civil Rights Congress. His religious faith didn't faze young Christian protesters determined to fight for their rights.”

However, as the latest crisis illustrates, the fuel subsidy in Nigeria is both untenable financially and difficult to defeat politically. The fuel subsidy program drains the government's coffers, while creating “rent seeking opportunities, overnight billionaires and cabals that have corruptly fed fat from the inefficiency of an unsustainable regime” and impeding “reforms at the state-run Nigerian National Petroleum Corporation (NNPC).” In short, the program entrenches corruption and inequality in the Nigerian petrostate. Overnight removal, however, would paralyze an economy that has grown accustomed to affordable fuel. If they intend to follow through on campaign promises to reform the economy and root out corruption, the incoming Buhari administration must be prepared for a long and contentious battle, in which the fuel subsidy is chipped away at a pace that allows for economic adjustment.

Of course, such a long slog will require quite a lot of energy—#aintnobodygotfuelforthat.

Hilary Matfess is an African Affairs analyst. She has conducted fieldwork in Tanzania, Ethiopia, Rwanda and Nigeria.