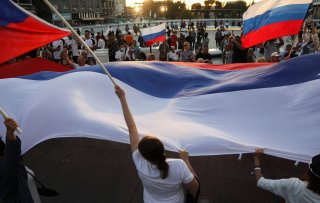 When missiles struck Polish territory last week, killing two Poles, the world was quick to point the finger at Russia. Despite the danger of magnifying an event that could spark a world war, Ukrainian president Volodymyr Zelenskyy insisted that Russia was behind the strike and called for heightened aggression on his country’s behalf: “This is a Russian missile attack on collective security—a very significant escalation. We must act.”

The Biden administration has repudiated Zelenskyy’s claims of Russian involvement but has simultaneously asked Congress for an additional $37.7 billion in aid to Ukraine. This is the latest of many bipartisan spending bills passed on Ukraine’s behalf by Congress—in addition to aid from other countries.

What drives such strong rhetoric and financing to repudiate and combat one country—sometimes in spite of facts? The clear answer: perception. In September, US News & World Report announced that Russia was experiencing a precipitous decline in its “Best Countries” ranking. Seven months after the beginning of the Russia-Ukraine conflict in February, Russia saw a 12 percent drop in its year-over-year global standing—one of the largest in the project’s history. The Russians’ lack of international support makes them an easy target for abuse.

This drop in rankings is not surprising when you consider US News’ methodology and audience. The company polls over 17,000 people from regions around the world as to whether they associate a country with terms like “human rights” and “strong international alliances.” According to SimilarWeb analytics, nearly all of the media company’s 20 million readers live in English-speaking countries, and Ukraine makes up just a tenth of a percent—Russia, even less.

But despite the difficulty of measuring something as fluffy as sentiment, Russia’s standing in the international community is a salient question. No country can exist as an island fortress. Without friends and allies, national sovereignty cannot last long.

Seven years ago, I co-founded a brand consultancy that specializes in cultural entrepreneurship—helping companies delve into their local culture or subculture and express themselves in those terms. My work often calls for thinking about how brands can be patriotic, historic, and even mythic—and what each national culture means to the rest of the world.

In America, our national brand—our standing—has long been a political football. President Barack Obama controversially embarked on a European tour during his 2008 campaign to spread the message that under his leadership, America would more closely resemble Europe in diplomacy. A major point of opposition against both President Donald Trump and President Joe Biden was that they have damaged how other countries in the first world perceive us. In every case, Americans seem preoccupied with that elusive prize of being liked by an international, first-world audience.

But how much does this global standing factor into matters of foreign policy? To what extent should international relations preoccupy our country’s leaders and decisionmakers? The answer is the same for nations as it is for brands: what matters most is not being universally liked, but the loyalty of your core audience of customers, stakeholders, and investors. In politics, the focus is on citizens, public servants, and partners—the rest are collateral at best, inimical at worst.

One type of brand that closely parallels the concept of national standing can be found on another US News ranking: universities. Aside from major scandals, universities are generally consistent from year to year in how they are perceived and how they attract new students or donors. Like most countries, universities are led by presidents and an administration with a balance of powers. But the college’s core brand is older, deeper, and stands apart from whichever educrat is currently at the helm.

Ask any development department and they’ll tell you what really matters is how a university is perceived by its most important audiences: prospective students, alumni donors, and prospective employers. This is why Ivy Leagues don’t bat an eye when they’re nipped at by higher education watchdogs or conservative academics. Nor do colleges like Hillsdale or the University of Dallas care when they catch flak from the political left. It takes a long time and consistent adherence to a brand persona to build or destroy an institutional brand; and there is no institution more prominent in the modern mind than national identity.

When the “global standing” of Russia becomes a news item in the Western press, readers wearing American-centric spectacles might see a drop in a US News ranking as signaling the impending doom of Vladimir Putin’s regime. It is a validation of what they saw unfold in the weeks after the war began, with companies and institutions and celebrities across the global American economic and cultural empire “canceling” Russia for its actions, some with punishing sanctions and divestment, the majority with projections of solidarity with Ukraine and high-fisted moral outrage at Russia. Who does not like to see proof that their distant participation in an active war is working?

But the opposite is closer to the truth: Russians are more likely to treat the Western media’s disapprobation as a badge of honor than a sign of their nation’s decline. They have built themselves an identity for a hundred years around the idea that Russia is the alternative to, if not the antidote for, the United States and the broader cultural trends we represent. Moving further away from America’s ideal is closer to the ideal they want for themselves. What appears to be a civilizational decline in the eyes of Americans is validation for Russians.

Many years ago in Russia, there was a sense of economic superiority: America was greedy, hierarchical, and oppressive—stealing from the poor to give to the rich. Russia and its Soviet Union were the champions of the downtrodden and had real equality under communism.

Eventually, after much pain and suffering, Russians let that particular farce fade away, but that did not mean they believed themselves to be defeated culturally. Their national myth is just as strong as that of Great Britain and perhaps stronger than that of the United States. As the American cultural empire became increasingly more modern and less traditional, Russia emerged from communism with a zeal for a pre-Bolshevik past. They doubled down on distinctly Russian sentiments by investing in cultural institutions like the church, the arts, and the academy, to restore their ties to each other and protect themselves from America’s soft power of cultural influence.

These institutions have in turn reaffirmed Russia in its identity as a fundamentally good nation with a storied history that uses setbacks as stones to build on their great inheritance. In the later 2000s, Russia found herself rising economically with America, but going in the opposite direction of America’s depleted, secularized, progressive culture.

This narrative has accelerated under Putin, a figurehead of cultural resistance who conducts the pieces of a national orchestra playing to an appreciative audience. Thus, his leadership fuels Russian resolve to be more “on brand,” leaning into the identity that their enemies wish to pillory them with.

We saw this same dynamic play out in the 2016 presidential election, when a supposedly brilliant diplomat, Hilary Clinton, called anyone who would vote for Donald Trump a “deplorable.” Everyone remembers the result: what was meant to be an epithet turned into a trademark banner to rally the Trumpist troops, uniting them against a common foe who openly despised them. The lesson here is that being disliked by the “right” people has the opposite effect intended.

Ultimately, neither America, the United Kingdom, nor any other nation can browbeat Russia by attacking their national brand. Putin’s core customer base—Russia’s voting public—affords him astounding levels of support that haven’t been seen since Ronald Reagan in the United States, even taking the country’s election integrity concerns into consideration. And internationally, Russia suffers from no shortage of friends: major players like Israel, Turkey, China, and India have not fully bought into the West’s renewed crusade against Russia. Perhaps they are pragmatists, not wishing to permanently destroy an economic ecosystem that was starting to reap rewards, or maybe under the surface, they know their own sensibilities are more closely aligned with old, familiar identities held together by borders, language, local customs, and self-interest.

The diplomatic tidepools that pit Russia against certain geopolitical foils and pair her with confederates are inevitable. Every brand eventually establishes a position in the public’s mind, and no amount of censure or promotion can forestall this inevitably. It is the law of perception. Russia’s brand draws crude lines in the international marketplace, a perception that Putin has not only exacerbated, but given the Russian people a cause to glory in: fighting against the perennial enemy of American global influence. The Western elite polarizing their institutions and media organs against Russia will not influence Putin or Russians to change their brand trajectory, but steel their resolve to triumph with it intact.

Andrew Beck is Partner at Beck & Stone, a brand consultancy connecting enterprises and institutions to culture. A native of New York, he now lives in Dallas with his wife and children. Connect with him on Twitter @AndrewBeckUSA.