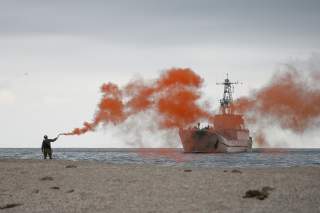 Russia’s aggression against its neighbors, especially Ukraine, is a fundamental cause of the strain between them, and between Russia and the West. Moscow wants international recognition of a sphere of influence as the basis for a new European security structure, but it is meeting resistance. Unless Moscow forges better relationships with its neighbors—which is something that the West encourages—then its deepening ties with the world beyond could reshape much of the post–Soviet space.

Post–Cold War hopes for a Europe at peace remain unrealized. Moscow is opposed to further North Atlantic Treaty Organization and European Union expansion eastward and to democratic uprisings (often called “color revolutions”) in former Soviet states. This was why Russia provoked Georgia into a disastrous war in 2008. Russian forces now occupy its separatist regions of Abkhazia and South Ossetia. To similar ends, Russian proxies and military forces seized Ukraine’s Crimea region in 2014 and now occupy part of the Donbas region, where over ten thousand people have died in a war that still simmers.

Russia also confronts these countries in other ways. It bombards them with anti-Western propaganda and warns that Georgia’s joining NATO could “provoke horrible conflict.” Russian warships are harassing Ukrainian shipping between the Sea of Azov and the Black Sea. Moscow holds Ukrainian political prisoners, including noted film director Oleg Sentsov. Russian Orthodox Patriarch Kirill, a Kremlin ally, is threatening to sever ties with Ecumenical Patriarch Bartholomew in Constantinople if he grants canonical status to the Kyiv Patriarchate.

Additionally, the Kremlin has tried (albeit unsuccessfully) to strong-arm Belarus into accepting a Russian airbase. Since the invasion of Ukraine, President Alexander Lukashenko has remained wary of Russia’s intentions and sought to improve Western ties and burnish his patriotic credentials. Meanwhile, Russia constrains natural gas exports from Turkmenistan in an effort to push it into exporting to China and Iran.

Still, Russia does not lack leverage in the post–Soviet space. It has military bases in Armenia, Kyrgyzstan and Tajikistan, and in Moldova's separatist Transnistria region. Moscow dominates the relatively protectionist Eurasian Economic Union to which Armenia, Belarus, Kazakhstan and Kyrgyzstan belong. Russian television and radio influence many audiences. Moscow exerts regional sway through some of the ethnic Russian minorities in Ukraine (over eight million); Kazakhstan (over three million); and more than a half-million in Belarus, Latvia and Uzbekistan.

Russia’s neighbors, sometimes with Western help, have been resisting much of Moscow’s coercion. In 2014, Ukraine contained Russia’s invasion of the Donbas region. In the following years, the country has strengthened its defenses. The West is training and helping to arm Ukrainian and Georgian forces. Georgia, Moldova and Ukraine have forged closer ties with the European Union, which awards its citizens with the popular benefit of visa-free travel. The Baltics—Estonia, Latvia and Lithuania—have boosted defense spending and welcomed NATO reinforcements.

This resistance might be causing the Kremlin to be more cautious. Moscow has stood by as China has raised its profile in Central Asia and the South Caucasus through investments in the Belt and Road Initiative's transport and infrastructure projects. Furthermore, the Kremlin has refrained from trying to abort a popular revolution in Armenia that ousted entrenched elites—some of whom were close to Moscow—despite evidence that the Kremlin is worried that the new government could pursue a more westward course in the footsteps of Georgia and Ukraine. (For instance, recent mayoral elections in Yerevan probably increased this concern in Moscow.) Finally, Russia has signed an accord with the other Caspian Sea littoral states that may help unblock energy projects that Russia previously impeded.

Moscow’s neighbors—and the West—would do well, however, to keep watch for any signs of new Russian intimidation. With the Kremlin under pressure from a fall in living standards and unpopular pension reforms, Putin might be tempted to mount “patriotic” diversions to boost his popularity.

Meanwhile, Russia’s neighbors will continue to diversify international ties. Western and Chinese companies are expanding energy development in the Caspian region. Ukraine and Georgia are reorienting their economies more toward Europe and markets to the south, such as India for Ukraine. Central Asian states are receiving more investments from China than Russia. Kazakhstan and others are pursuing “multi-vector” foreign policies.

The longer Russia delays in improving relations with its neighbors, then the more likely it is that they will pursue alternative options. It is also likely that tensions will persist between those neighbors and Russia—and in Russia's relationship with the West. Therefore, efforts to ease that tension should be high on the list of Western priorities with Russia.

Kenneth Yalowitz is a Global Fellow at the Wilson Center, former U.S. Ambassador to Belarus and Georgia, and an adjunct professor at Georgetown University.