Russia, America and NATO: Where Are They Headed? 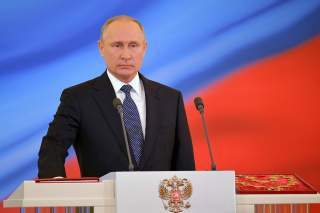 Already President Trump’s visit to Brussels for a NATO summit and the United Kingdom is engendering considerable controversy, with a further summit meeting on Monday with Russian leader Vladimir Putin to come in Helsinki. How successful is Trump’s course? Does NATO remain a vital component of American national security strategy? Or is it being downgraded by Trump?

To examine such pressing questions, the Center for the National Interest convened a panel of foreign policy experts speaking at a lunchtime panel on July 12. While there was broad agreement that NATO is vital to America’s national security interests, not all of the panelists believe that it was wise for the United States to have extended the alliance into Eastern and Central Europe and the former Soviet Union itself in the aftermath of the Cold War.

Indeed, to negotiate effectively with Russian president Vladimir Putin at the forthcoming Helsinki Summit on July 16, U.S. president Donald Trump will need to negotiate from a position of strength. To that end, the United States needs a strong NATO alliance behind it, Richard Burt, who served as ambassador to Germany and as an assistant secretary of state for Europe and Canada during the Reagan administration, said. A strong relationship with Germany—the “linchpin” of Europe—is especially important. “NATO is not an impediment to working with the Russians, it is a precondition,” Burt said.

“NATO is essential to U.S. national interests,” Dimitri Simes, president and CEO of the Center for the National Interest, said during the panel discussion in Washington D.C. “With all of its imperfections, NATO is a key component of American power. And to give up this component would be reckless especially if there is no overriding need.”

Nevertheless, NATO can also be problematic for American interests—as any such alliance structure can be for its principal guarantor. Simes noted that if one looks back to the ancient world--specifically, Thucydides and the Peloponnesian War--smaller allies can often draw a great power into conflict through reckless and self-serving actions. As Athens continued to expand its alliance structure, some of its new allies acted on their own parochial interests and contributed to war with rival great power Sparta. “Alliances can greatly enhance your power and credibility,” Simes said. “But unless you are careful and analytical, they can also provoke wars. Go back to the Peloponnesian War, that’s how that war started.”

Pushing the NATO alliance towards Russia’s borders—towards the “suburbs of St. Petersburg”—has predictably drawn a strong reaction from Moscow, Simes said. While the Russian reaction does not necessarily make sense given Western intentions, Moscow—Simes noted—sees NATO moves in the Baltics as inherently threatening. It would be the equivalent of Russia holding exercises in Canada or Mexico if Moscow were allied to those nations. “I don’t need to tell you what the reaction in the United States would be,” Simes said.

Burt agreed that NATO is vital to American geopolitical interests. However, Burt said that NATO expansion became an end unto itself during the 1990s in the immediate aftermath of the disintegration of the Warsaw Pact and the collapse of the Soviet Union when the alliance was trying to find a new purpose for itself. Many Washington think-tanks—particularly the Atlantic Council—dedicated themselves to inventing a new purpose for NATO during that period when the alliance was searching for relevance in the post-Cold War-era, Burt said. “That’s when you make mistakes,” Burt said. “That has led to our current relationship with Russia. NATO expansion sort of became an end unto itself. It didn’t have a strategic rationale as much as it had a democracy promotion rationale.”

According to Burt, NATO overreached. Had there been a coherent strategy, Burt said, the alliance would have figured out a place to draw a line on how far East the alliance should have expanded. Ultimately, NATO expansion pushed too far into what had been the former Soviet Union by crossing into Georgia and Ukraine by saying that those two states would eventually become part of the alliance during NATO’s 2008 Bucharest Summit. “In my mind, when George W. Bush went to Bucharest in 2007 and proposed the inclusion of Ukraine and Georgia, that was a bridge too far,” Burt said. “We’ve been dealing with the consequences since then.”

Burt suggested that Russian revanchism has provided NATO with a strategic purpose, which is to defend the alliance from military aggression. Nonetheless, the alliance is still dealing with the issue of “freeriders,” which President Donald Trump emphasized at the NATO summit in Brussels. It is unclear if the president will succeed in persuading European members of the alliance to raise their outlays as substantially as he hopes, but it seems very likely that the NATO allies will have to boost their defense expenditures in coming years to meet the agreed upon two percent of gross domestic product by 2024. “It appears to me that we are coming to grips with that issue,” Burt said.

But one of the reasons that the United States made poor strategic choices during the 1990s is that foreign governments actively try to influence Washington via lobbying. There are numerous lobbying firms and think-tanks around operating in Washington that are paid by U.S. allies to further their own particular agendas. But those agendas often do not line up with American national interests: “There is a lobbying problem in NATO,” Burt said. “Washington has become a bazaar. All of these countries want to influence our politics, so they all establish lobbying efforts and that does not lead to the most coherent decision making.”

Ambassador Kurt Volker, U.S. special representative for Ukraine negotiations and a former ambassador to NATO and executive director of the McCain Institute, took a different view. In Volker’s view, Washington and NATO had a very deliberate and strategic policy to expand the alliance into the formerly Soviet-dominated Eastern and Central European states. “I firmly believe that NATO enlargement has been a very good thing for all the right strategic rationales from the beginning,” Volker said. “These are countries that are afraid of Russia.”

Fundamentally, Volker said he believes that the problem lies with Russia’s loss of its empire and its desire to regain those lost lands. Putin, in Volker’s view, hopes to rebuild Russia as a great power, seeing the 1991 demise of the Soviet Union as the 20th Century’s greatest geopolitical tragedy. Volker noted that Putin has been decrying a ‘Western betrayal’ of Russia by enlarging NATO since the 2007 Munich Security conference, which was before Bush proposed to expand the alliance into Ukraine and Georgia. Thus, in Volker’s view, the blame for the current U.S-Russia impasse lies with Russia. “Where we go to under that is Russia under Putin concluding that is an unfair arrangement in the post-Cold War and it is going to try to reverse it,” Volker said. “Particularly to draw a line with Ukraine and Georgia, so it changed the terms and it invaded both countries.”

If one strips away, Trump’s crude language, Volker said that the substance of the president’s messaging and policies when it comes to NATO are not all that dissimilar to previous U.S. administrations going back to President Bill Clinton. Presidents Clinton, Bush and Barack Obama had all at various times pleaded with America’s European allies to spend more on defense and to share the defense burden.

When it comes to the Helsinki summit on Monday, the Russians, Simes indicated, are likely coming to the Helsinki summit with a mixture of confusion, hope and apprehension. “They’re confused because of all of us are confused about what constitutes U.S. foreign policy and what the Trump Administration is claiming to do,” Simes said. “I think they’re hopeful, not because they think Trump is an agent or they can control him or they can manipulate him, but they are hopeful because they think Trump maybe, just maybe, thinks the way they do.”

For the Russians, that would mean that Trump would frame U.S. national interest in the same way Moscow—in a more narrow realpolitik fashion. Nonetheless, Simes said that the Russians understand that Trump wants to make America stronger. As such, squeezing the Germans to cut their energy ties to Moscow is something the Kremlin understands as being in America’s national interests even though it hurts Russia, Simes said, because it is a simple naked power move.

Volker does not expect that Trump’s policy on Russia will be substantially different from his predecessors when he meets with Russian president Vladimir Putin in Helsinki—thus one should not expect the White House to recognize the Russian annexation of Crimea. “If you look at how this is playing out, this is a familiar set of policies,” Volker said.