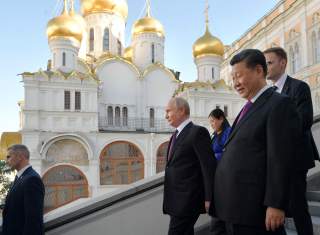 Last month, there was a peculiar event occurring in the skies over the Sea of Japan. Military aircraft from Russia and China were conducting a joint air patrol and entered the respective Air Defense Identification Zones (ADIZ) of Japan and South Korea. The patrol, which was the inaugural joint exercise of long-range nuclear-capable bombers for Moscow and Beijing, should raise significant eyebrows for the United States and its allies in the region. Magnifying concerns on the incident was the fact that the Russian planes twice intruded into the airspace of the disputed Takeshima-Dokdo islets, which are administered by South Korea but claimed by Japan.

In response, Seoul scrambled fighter jets and fired more than three hundred warning shots, according to Korean defense officials. This drew a sharp rebuke by Japan, which also dispatched its air force in response to the incursion. A Japanese official called the Korean maneuvers “totally unacceptable and extremely regrettable,” as they occurred over islands that Tokyo considers its sovereign territory. Given the number of aircraft involved and the repeated intrusions into the air defense zones, the incident was likely carefully designed by Russia and China to elicit a strong reaction from Tokyo and Seoul as well as to further undermine their already strained bilateral relationship, which has reached its lowest point in years over historical matters and a brewing dispute over new export control restrictions levied on South Korea.

Why is this incident important? First, the patrol, while provocative in and of itself, is only the tip of the iceberg. It is illustrative of a fast-developing strategic partnership between China and Russia, a trend that poses a threat to the U.S.-Japan alliance as well Washington’s other alliances and partnerships in the region. Indeed, the security interests of Beijing and Moscow are increasingly aligning in East Asia. Russia continues to face a deep chill in relations with the United States and its European allies, most recently evidenced by Washington’s decision to withdraw from the Intermediate-Range Nuclear Forces treaty as a result of Moscow’s material breach of the pact. The Defense Department has also raised concerns in Moscow and Beijing by noting that it hopes to deploy these previously banned capabilities to the Asia-Pacific theatre in the near future.

Further pushing two sides together is China’s gradual approach to look at Russia as a key partner to offset the pressure from the United States and its alliance network in Asia, especially with Japan—where relations have been tense as a result of their territorial row around the Senkaku Islands in the East China Sea. Chinese and Russian leaders espouse similar worldviews and the same opposition to the international liberal order, democracy and human-rights issues on which Japan and the United States stand at the opposite end of the spectrum. China and Russia also share the same immediate strategic objective of weakening the United States’ presence and undermining its alliances in the region. The air patrol and the reaction to it directly contributed to the latter goal.

Of course, China and Russia are not formal allies, and there remains a degree of distrust, especially on the part of Moscow. For example, Russia remains quietly wary of Beijing’s intentions in Central Asia with its Belt and Road Initiative, worried that China may be looking to unseat—at least partially—Russian dominance in the region. Likewise, Russia also remains concerned about the surge of Chinese investment in its Far East, which carries economic benefits but also potentially disadvantages Russian businesses.

Nonetheless, shared grievances with the United States and pragmatic considerations have driven the leaders of both countries to deepen cooperation on many fronts in order to advance their international agendas. This has been evidenced, among others, by their voting records at the United Nations Security Council—often thwarting Western initiatives—and a growing number of joint military drills, including the large-scale Vostok exercises in 2018, which involved more than three thousand Chinese troops.

The strengthening Beijing-Moscow partnership highlights the importance of the U.S.-Japan alliance as well as Washington’s relationship with like-minded regional partners. But while the need for a sustained commitment to allies and friends has never been more salient, the Trump administration’s approach has made the United States appear unreliable to those who most count on a strong American presence. President Donald Trump’s tendency to slight allies by taking measures usually reserved for adversaries—such as tariffs or demands for renegotiated trade and burden-sharing deals—have given rise to ill-feelings that China and Russia will be wont to exploit.

Finally, the potential challenge posed by Sino-Russian convergence also underscores the urgency of enhancing U.S.-Japan-South Korea trilateral cooperation, which is currently undermined by Japan-South Korea tensions. While the deep rift between Tokyo and Seoul may not be resolved until there is a change of administration in either capital, all parties, including Washington, should look for an exit ramp to de-escalate the conflict. Unfortunately, the United States has appeared unwilling, thus far, to get involved in the tiff between its two allies. Unless the Trump administration is willing to hand Beijing and Moscow a golden opportunity to advance their strategic interests, it will have to change course.