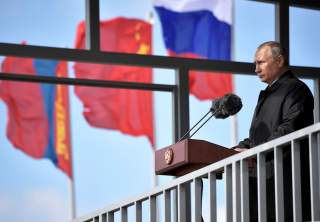 The recent Sino-Russian military swaggering in Russia’s Far East may signal a new lasting alliance between the two Eurasian powers. This reactionary partnership is primarily due to the simultaneous American pressure against Moscow and Beijing and is coupled with their desire to challenge the U.S.-dominated global order. However, it may not be as permanent as it seems. Such tactical cooperation is not underpinned by common ideals, but rather by a shared desire to emasculate the Western liberal order.

Russo-Chinese official relations date back to the mid-seventeenth century when the two countries’ borders intersected following the conquests in the Siberian hinterland. Since then the relationship has been tempestuous, marked by years of both trade and cooperation as well as military standoffs and land-grabs.

Perhaps the most striking episode in modern Chinese history that informs its conduct of foreign policy today is China’s “century of humiliation.” This era—described in the Chinese narrative as a series of unequal and demeaning treaties with Western powers—has left a lasting mark on the political psyche of the country and its perception of global affairs.

For instance, Russia—among other European empires—also seized the opportunity created by the Second Anglo-Chinese War and the Taiping Rebellion to expand its frontiers at China’s expense. Russia expanded past the Amur River all the way to modern-day Vladivostok, thereby realizing its long-held maritime aspirations of gaining access to the Pacific.

This unsteady relationship manifested itself also during the Cold War as evidenced by the Sino-Soviet split over the conflicting doctrinal as well as geopolitical visions. This vacuum effectively charted the way for the eventual Sino-American rapprochement, as yet another example of tactical and circumstantial partnership.

With the end of the Cold War and the following brief chapter of an unchallenged U.S-led order, the global system is now in a stage of active transformation. The symptoms of a geopolitical recession are coming to light in the face of America’s decline in relative power and the ascent of Washington’s global challengers whose rise has ironically been enabled by the U.S.-backed international trade and economic system.

With no significant adversary in the horizon, America embarked upon reducing its armed forces and intelligence funding following the collapse of the USSR. The September 11 attacks on the U.S. mainland entrenched America in a decades-long anti-terrorist campaign, mainly ignoring the looming rise of revanchist China and Russia. It was only in 2017 that the U.S. National Security Strategy called out Russia and China, citing their intentions to “challenge American power, influence, and interests,” warning they were “attempting to erode American security and prosperity.” This official recognition of the threat from Russia and China signaled the inevitable return of great-power politics.

Although there are signs of Eurasia transforming into a geoeconomic supercontinent—powered by China’s economic prowess and extensive infrastructure projects—it is yet unclear whether Russia will accept the status of a junior partner in a Beijing-centric order. To this end, the recent epic Vostok 2018 war games can also be interpreted as a way for Russia to reassert to the world its military might and send a clear message to China. Contrary to a belief that this exercise marked a new stage in Sino-Russian military partnership, the military exercises could serve as a deterrent by Russia against China’s creeping encroachment into Russia’s Far East and Central Asia. Russia’s pressing need for Chinese investments and capital flows into the economically-distressed Far East has exacerbated Moscow’s fears of China’s long-term regional influence. Given the existing demographic and economic trends in Russia—partially fueled by the Kremlin’s shortage of immediate alternatives due to the crippling Western sanctions—Moscow is concerned about Beijing’s economic statecraft and soft-power projection in its near abroad. Moreover, Russia is also worried about the evident danger of China’s potential to institutionalize its demographic imperialism in Russia’s Far East.

For the first time since the fifteenth century, China feels secure enough on the mainland to now venture into the seas and faraway lands. Russia, too, despite its anxiousness about perceived NATO encroachment, is largely shielded from large-scale external aggression. The greatest security threat for both is posed from within. Authoritarian succession and regional secession are grave challenges that Russia and China will have to grapple with in a not-too-distant future.

Authoritarian government succession—especially after the departure of a strongman leader—has historically proven to be a thorny process. Josip Tito’s Yugoslavia or Francisco Franco’s Spain are just two examples. It remains to be seen how the political systems and culture in Russia and China will respond to the eventual departure of Putin and Xi. This will have a lasting impact not only on the Russo-Chinese relations but for the region and the world as a whole.

Russia has a dire socioeconomic situation, and China realizes it cannot sustain previous economic-growth rates. They both also share mutual fears of domestic instability. All of these factors have caused both to independently conclude that the window for action is narrowing. Therefore, both Moscow and Beijing want to realize their regional grand designs before sands run out. While trying not to step on each other’s toes and cooperating in areas of mutual interest, both powers will have to eventually find their own power balance. China’s long-term economic framework for the continent is poised to pull the rug under Moscow’s feet, dramatically limiting the Kremlin’s maneuverability in its traditional domain of influence. Undeniably Russian authorities cannot be ignorant of this fact, but while the short-term interests align and viable alternatives are scarce, Moscow will have to defer action.

In some instances, Beijing too is forced to turn a blind eye against Moscow’s sale of armaments to some of its regional foes, such as Vietnam and India. Nonetheless, should Moscow halt its weapon exports, the latter countries would turn to Washington—an event deemed more unacceptable for Beijing.

Despite President Donald Trump’s imbalanced rhetoric regarding America’s allies, the U.S. strategy must be to strengthen its alliance network further to provide a strong political and economic counterweight against Russian and Chinese designs. Notwithstanding some of America’s strategic mistakes—e.g., withdrawal from Trans-Pacific Partnership—Washington remains the main security pillar by facilitating regional common goods in defense, commerce and good governance. Both in Asia and Europe, the absence of territorial claims by the United States makes Washington a welcome power broker—an image that Russia and China lack. For this reason, it is vital to continue the trends set by the Secretaries Mattis and Pompeo in reassuring everyone of America’s resolute commitment to its allies.

Even though there is a serious question mark hanging over an intrinsic Sino-Russian alliance in the long run, the tandem is still capable of inflicting lasting damage to America’s global interests and eroding its regional influence. Therefore, to check against a Russo-Chinese “Monroe Doctrine” in Eurasia, America should reinvigorate its alliance system as well as naval and ground presence as a bulwark to defend the regional stability that directly impacts America’s own national interests.