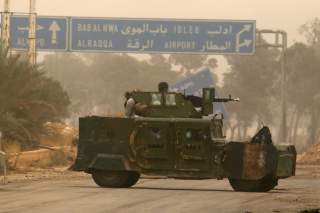 One day on an island in Greece, I met a family that opened my eyes to the dilemma that many dislocated Syrians face. They arrived the previous day and as they were waiting in line to be assigned housing, I struck up a conversation with the father. After the initial pleasantries, the conversation turned to his family’s history. They were from northern Syria, he said, and they had only left the country a month earlier.

I remember him looking at me with an expression of utter exhaustion, the stress and despair of fleeing over and over again having taken its toll on him. With his gaze fixed on me, he asked in desperation, “Where else are we supposed to go?”

It is the same question millions of displaced Syrians and the international community have been asking.

After more than seven years of war, Syria is decimated. The World Bank estimates that from 2011 to 2016 Syria lost a cumulative of $226 billion in GDP. According to the United Nations eleven million Syrians have been displaced, around six million internally, while more than five million have fled the country. More than a million Syrians have fled to Europe. The scale of destruction and dislocation is so devastating the UN human-rights chief has called it the worst human-made disaster since World War II.

Still, as the Assad regime retakes more territory, the calls for Syrian repatriation are growing. On September 29, at the UN General Assembly debate, Assad’s deputy prime minister, Walid al-Moualem, said it was time for Syrian refugees to return home. The president of Lebanon, Michel Aoun, and Russian foreign minister, Sergey Lavrov, echoed these calls and trumpeted a Russian-led repatriation effort, arguing that the situation on the ground is secure and repatriation should begin.

The United States must counter Russia’s manipulation of the refugee population and work with the international community to block any move to repatriate Syrian citizens involuntarily or prematurely.

Despite the Russian disinformation campaign to the contrary, the reality is that Syria is not safe for the return of refugees. The UN High Commissioner for Refugees, Filippo Grandi, stated in March that it was too early to discuss return since the situation remained unstable. Critical infrastructure can barely support those individuals who stayed, let alone newly repatriated civilians.

The World Health Organization’s 2017 report concluded that half the country’s hospitals, clinics and primary health-care centers were either partially functional or inoperable. The World Food Program estimated in August 2018 that 6.5 million people were unable to meet their food needs, and four million more were at risk. And a joint study conducted by Norwegian Refugee Council, Save the Children and the International Rescue Committee, among others, found that for every refugee who returned home in 2017, three more were newly displaced. The continued dislocation of thousands of Syrians, combined with a lack of basic resources, are hardly ideal conditions for a mass return.

There is also a legitimate widespread fear among dislocated Syrians of political retribution from the Assad regime should they return. A study conducted by the Carnegie Middle East Institute and a September 12 UN inquiry found that many Syrians are afraid to return to their homes. A survey conducted by the Syrian Campaign in 2015 found that 70 percent of Syrians were fleeing the Assad regime and 52 percent said Assad would have to leave before they returned home. Moreover, Syrians who have returned to Syria have frequently been subject to forced conscription and arbitrary imprisonment by the regime.

The Assad regime is also deliberately using the mass displacement of the population as an opportunity to re-engineer the nation’s demographics. Law No. 10 passed by the Assad regime allows the government to seize the land of any individual who is unable to prove ownership, or any land local councils deem necessary for redevelopment, within a year of its passage. According to the Norwegian Refugee Council, only 17 percent of Syrian refugees had documentation proving ownership of their property in Syria. There is little doubt that the Assad regime and its business supporters, like Samer Foz, are using the law to punish political opponents and profit from their stolen property to fill regime coffers. Therefore, few of the people displaced by the war will actually be able to return to the property they left behind.

The United States and its European allies must continue to reject Russian and regional pressure to repatriate Syrian civilians until circumstances on the ground permit their safe, voluntary return. Russia is unable to fund Syrian reconstruction and therefore needs American and European help to rebuild Assad. Thus, Russia is wielding global exhaustion over the refugee crisis as its ticket to normalize Assad and get out of footing the bill for the very conflict it helped propagate. The United States must use Russian and regime thirst for international financing as leverage toward the UN political process to end the conflict; only once a political resolution is reached should America support Syria’s reconstruction.

There’s already support for this in Congress where representatives Eliot Engel (D-N.Y.) and Adam Kinzinger (R-Ill.) introduced legislation named the No Assistance for Assad Act (H. R. 4681), which limits U.S. provision of reconstruction assistance and passed the House of Representatives earlier this year. Likewise, in September, the Senate Foreign Relations Committee approved the Caesar Syria Civilian Protection Act (H. R. 1677) which sanctions those parties looking to help the Assad regime profit from the country’s reconstruction while it punishes its opponents. These bills are necessary to bolster American and European posture toward building diplomatic leverage to end this crisis once and for all.

Though some say that denying reconstruction assistance will only prolong the humanitarian crisis, Assad has proven to be an unreliable partner in distributing existing international aid. For example, Assad is cynically using reconstruction investments to reward loyalists while manipulating UN humanitarian assistance to prop up his regime at the expense of the country at-large. Russia’s argument also ignores the greater political picture. The same tyrannical policies that drove the Syrian population to revolt remain in place. And now the population has to deal with the legacy of intentional displacement by the regime and the seizure of their property.

Since it is not safe for Syrian exiles to return, the question becomes what should the United States do to counter Russian disinformation and assist American allies? For a humane and voluntary return of Syrians to their homeland, the United States must emphasize a political transition that guarantees the rights and property of those returning. To put pressure on the regime to encourage a political transition, America and its allies should maintain sanctions and refuse to participate in reconstruction efforts in areas under Assad’s control.

The Syrian crisis continues to be one of the most significant challenges of our time and the largest humanitarian disaster of the twenty-first century. The international community would only make it worse by supporting a deceitful repatriation program that would compound the misery of the innocent forced from their country by the conflict.

The Syrian father’s question of “Where else are we supposed to go?” must not be answered with, “Wherever the tyrants who dispossessed you of your rights and property demand.”

Justin Roy holds a master's degree in history from the University of San Diego and is a fellow at Americans for a Free Syria. He has worked with a humanitarian NGO in Greece and Croatia during the Refugee Crisis and in Puerto Rico following Hurricane Maria. His previously has been published in Providence and The Federalist.