Russia Isn't a Priority for Biden 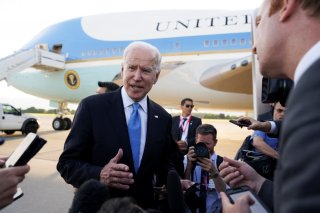 Thirty years ago, as a graduate student, I undertook a project for Georgetown’s Institute for the Study of Diplomacy, looking at how the U.S. government navigated between its legal requirement not to recognize the incorporation of Lithuania into the Soviet Union in 1940 and its efforts to balance the acknowledgment of the Lithuanians’ March 11, 1990 declaration of the re-establishment of their sovereign status with a desire not to undercut the Soviet government of Mikhail Gorbachev. In conducting the interviews for this study, a comment by an ex-Soviet diplomat really struck me. He noted that, by the late 1980s, Soviet officials had become used to their American counterparts starting any talks with a recited litany of concerns (human rights, Soviet overseas interventions, and even the non-recognition of the incorporation of the Baltic States), but that he and his colleagues considered this a box-checking exercise — immunizing their American interlocutors from domestic criticism by having a documentary record that a number of issues “were raised.”

I was reminded of that comment in watching the meeting today between Presidents Joe Biden and Vladimir Putin. In their separate press conferences following their two sessions (the immediate bilateral and the larger session between the two delegations), both leaders made a point of stressing that issues were raised. Indeed, President Biden repeatedly stressed his obligation and responsibility to “raise concerns” about human rights. President Biden highlighted several examples of Russian action that the United States finds undesirable, and laid down what might be termed two “soft” red lines — unspecified consequences in the event that Russian political activist Alexei Navalny dies while incarcerated, and some sort of American cyber retaliation for any further attacks on U.S. infrastructure emanating from Russian sources (perhaps an “eye for an eye,” or a pipeline interruption for a pipeline interruption). For his part, President Putin was not shy in placing the blame for the deterioration in U.S.-Russia relations solely on Washington’s shoulders and parried back any criticism of Russian domestic or international actions by trying to find parallels in U.S. behavior. Both sides “raised concerns” but the overall takeaway was that the meeting, while difficult, was productive. So, in receiving a series of complaints from Biden, did Putin “tune them out” as something Biden needed to show he raised so that they could then proceed to other matters?

After all, the meeting also saw moves to restore suspended channels of communication: the return of ambassadors to the respective national capitals and the start of a new round of strategic stability talks. The meeting saw the tacit admission that Russia remains one of the world’s great powers, with influence on the global agenda, and that Moscow has to be part of the conversation, even if disagreements persist. Signaling the continued rise in importance of climate change as an important organizing principle of U.S. foreign policy, the two presidents also explored areas for U.S.-Russia cooperation in dealing with the environment, particularly in the Arctic. So what are we to conclude? Are issues like human rights and the status of Ukraine going to be raised, but then subordinated to achieving other objectives in the U.S.-Russia relationship? Are we going to see the enunciation of clearer red lines for cyber activity that is demonstrated to originate from Russian sources? When, in short, does “raising concern” become “taking action?”

For instance, Arctic development is a major pillar of the Russian government’s economic strategy for the 2020s, designed to jump-start growth and also allow Russia to exploit northern resources, including both hydrocarbons and newer sources of “green” energy. In the past, the U.S. has used sanctions on Russian energy projects as a tool to try to compel Russia to change course, and at present U.S. firms are prevented from transferring all sorts of technologies (as well as helping to finance these projects). But, moving forward, will the United States sanction Russian projects in the Arctic, at the risk of denying Russian access to new technologies that can mitigate the environmental impact of development? In other words, as Russian firms like Rosneft and Novatek move ahead with their Vostok Oil and LNG-2 projects, would the Biden administration sanction them should Moscow breach any of the “areas of concern” that were raised in Geneva, or would environmental exceptions be made, on the grounds that preventing a major ecological disaster in the Arctic now carries greater priority?

The presidential meeting took place amidst the public revelation of division within the Biden administration on how to approach Russia. The decision, last month, not to implement sanctions against the Nord Stream II holding company and its directors was taken at the presidential level, against the recommendations of the top figures at the State Department. In addition, once it became clear that Russia was not planning on restarting direct military operations in eastern Ukraine, an expanded U.S. military aid package to Ukraine was put on hold as Russian forces demobilized along the border. In both cases, proponents of increasing pressure on the Russian government (via further sanctions on Nord Stream and by increasing assistance to Ukraine) found that the National Security Council staff was not prepared to view Russia policy in isolation, but in the context of two more critical U.S. relationships: with Germany and with China. The calculation was that provoking a rupture with Germany (on the eve of major trans-Atlantic summits, where a major U.S. objective to forge a more united Euro-Atlantic position on China) was not worth the pressure that might be brought to bear on Russia, and that further sanctions on Russia continue to incentivize Moscow to turn to Beijing. (One point here has been to chart the major acquisitions of new military technology China has been able to obtain from Russia since 2014, helping, as the Lowy Institute notes, to close the power differential gap between Beijing and Washington.)

What this suggests is that there is an emergence of a calculus in which policy towards Russia must now be considered in the context of other priorities, rather than existing in an independent sphere. For the last six months, we’ve gotten clear signals that “China” and “climate” are two overarching considerations, around which all other policies are in a supporting role. And the tenor of Geneva suggests that, despite having a long list of grievances with Moscow for its domestic and international behavior, the Biden administration, at least for now, will make those complaints known, but is prepared to defer or set aside immediate reactions if it can strengthen the climate and China considerations.

Nikolas K. Gvosdev is a contributing editor at The National Interest.