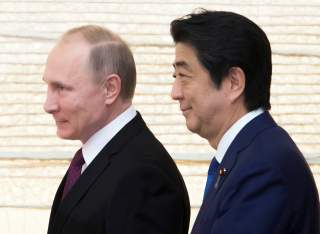 While Russian president Vladimir Putin continues to wage Russia’s geopolitical offensive from Donbass to cyberspace, he has recently extended an olive branch in a surprise gesture to resolve his country’s seventy-three-year-old antagonism with Japan. At the Fourth Eastern Economic Forum in Vladivostok last week, the Russian president extemporaneously offered Japanese prime minister Shinzo Abe a peace deal by signing a bilateral peace treaty without any preconditions. The proposed agreement would defy the two countries’ preceding agreements to resolve the territorial issues surrounding the four southern Kuril islands before signing a peace treaty, prompting Tokyo to immediately issue a rebuke.

Although Tokyo’s reaction was right in light of the numerous mutual agreements signed by the two countries over decades, it scarcely updates Abe’s so-called “new approach”to Russia unveiled in 2016. In fact, Putin’s surprise offer of a peace deal may be the ultimate test of the U.S.-Japan alliance that has been traditionally locked into Tokyo’s perennial reliance on Washington for geopolitical decisions. At a time in which U.S. president Donald Trump has disrupted Washington’s global alliance networks, the newly-reelected Abe increasingly faces an emerging geopolitical reality in which Tokyo has no choice but to wean itself off its American ally over many strategic issues, including its troubled relations with Moscow.

A War that Never Ended

The existing framework of the U.S.-Japan alliance is a major obstacle standing in the way of Abe’s engagement with Russia. In fact, that framework has changed little ever since the alliance entered into effect in 1952. In 1956, when Tokyo was considering trading two of the four disputed islands for a peace treaty with the Soviet Union, U.S. Secretary of State John Foster Dulles issued a sober warning that such territorial compromise with Moscow would result in an Okinawa under American sovereignty, effectively thwarting Japan’s bid for a grand bargain. Washington’s intervention solidified Tokyo’s subordinate position in Japan’s geopolitical calculations particularly vis-à-vis U.S. adversaries, including the Soviet Union and its successor, Russia. A Cold War incident thus effectively froze Tokyo’s territorial position in virtual perpetuity that has since become the country’s foreign policy orthodoxy, leaving little room for diplomatic flexibility.

Against this backdrop, the prospect for Abe’s diplomatic success remains highly doubtful. The Japanese prime minister's “new approach” to Russia aims for a territorial breakthrough by building the basis for a rapprochement through joint economic cooperation in Siberia and Russian Far East. His strategy has mostly been a self-fulfilling prophecy so far as its success would depend almost entirely on Moscow’s goodwill.

Putin has exploited Abe’s strategy whenever the Kremlin expressed its disinclination to discuss the territorial dispute all the while winning lucrative investment deals from corporate Japan one after another. Indeed, Abe’s participation in the Vladivostok forum last week marked his twenty-second summit with Putin with no tangible progress in the territorial talks since 2013 despite multi-billion-dollar economic agreements signed over the years. Money may move Putin's heart, but a possible establishment of U.S. military bases on the disputed islands under Japanese sovereignty would dissuade his brain from any concessions. None other than the Japanese national security adviser confirmed such a possibility if Japan restores its sovereignty over the islands. In short, nothing is fundamentally new about Abe’s signature initiative so long as the structural legacies of the U.S.-Japan alliance from the Cold War days continue to impede its implementation.

Unlike during the Cold War, the United States under Trump is no longer constrained by many shibboleths associated with the U.S.-Japan alliance. Moreover, the opportunity cost of perpetuating the legacies of the last century could significantly impinge upon Japan’s future in a leaderless world. Indeed, the present geopolitical reality demands Tokyo’s proactive leadership in charting the future of the bilateral alliance toward integrating a third country into its structure. A so-called U.S.-Japan+Alpha formula would effectively address the globalizing geopolitical imperatives of the bilateral alliance by allowing the addition of other like-minded countries.

Such a formula is already palpable in the Indo-Pacific region with Washington officially adopting Abe’s 2007 “Free and Open Indo-Pacific” strategy that links key regional poles, such as Australia and India, to the U.S.-Japan alliance. By contrast, the other geopolitical vector, Eurasia, lacks a comparable framework largely because of the absence of a peace treaty between Russia and Japan. As a result, Russia and China are expanding their geopolitical influence across Eurasia, culminating in their joint 2018 Vostok military exercise to the immediate rear of the U.S.-Japan alliance.

Therefore, Japan’s limited influence in Eurasian geopolitics diminishes its potential as the leading champion of the beleaguered liberal international order. At a time in which Russia’s Eurasian Economic Union and China’s Silk Road Economic Belt look to dominate Eurasia, the regional clout of the liberal international order is increasingly in doubt particularly given Washington’s seeming lack of interest or grand strategy. Just as Washington adopted Abe’s Indo-Pacific initiative, Japan is uniquely positioned to not only globalize the future of the bilateral alliance but also accelerate its leadership by proactively engaging Eurasian countries to integrate them into the U.S.-Japan+Alpha formula. Indeed, as Abe embarks on his final term as Japan’s longest-serving prime minister in history, projecting Japan’s geopolitical influence across Eurasia would consummate his foreign policy accomplishments and global legacy.

Russia might just hold the key to Japan's greater engagement with Eurasian countries. A historic rapprochement with Russia would provide Japan with enhanced access to the burgeoning Eurasian market, particularly Central Asia. Moreover, Tokyo’s geoeconomic presence would be a significant counterweight against Beijing's regional ambitions while checking the growing Russia-China strategic partnership that increasingly looks to deepen their military cooperation. Indeed, Russia is paradoxically is suspicious of China's growing geopolitical clout, and Moscow's current de facto alliance with Beijing is a product of its diminishing options on the table due to its rivalry with the West. Japan’s greater engagement would add a much-needed alternative for Moscow’s regional strategy. Although a U.S.-Japan+Russia formula may be a remote possibility today given domestic politics in Washington, Tokyo could take its first step by boosting its ongoing efforts toward a diplomatic breakthrough with Moscow.

Such a proposition would require unorthodox thinking about the perennially troubled Russia-Japan relations. Given the uninterrupted drama unfolding in Trump’s White House as well as his lack of interest in America’s global leadership, Tokyo finds itself virtually unfettered from Washington’s potential admonishment for the first time in the history of the U.S.-Japan alliance. Against this backdrop, Putin’s Vladivostok offer was more his calculated test of Tokyo’s willingness for independent thinking than a disingenuous act of trolling.

In response, Abe could pull off the impossible: acquiescence in Putin’s offer of a peace deal by shelving the territorial dispute. Putin himself followed up his proposal by adding that a conditional peace treaty would be possible, paradoxically leaving room for delaying the territorial question to be discussed in the future as well as the potential application of Washington’s alliance obligations to the disputed islands. To be sure, Abe’s acceptance of the Russian proposal would undoubtedly invite nationwide outcry from his domestic constituents particularly those displaced in the north. Meanwhile, it could become the first step toward boosting Japan’s presence across Eurasia, potentially allowing Tokyo to craft a Eurasian vector in its geopolitical strategy. Finally, Abe’s Kissengerian rapprochement with Russia would open a new chapter in the history of the U.S.-Japan alliance with a Tokyo more proactively leading its future trajectory.

Russia has perpetually lurked as the bogeyman standing in the way of postwar Japan’s drive toward full-fledged normalization. Indeed, absent a peace treaty, Russia and Japan are still technically at war. Such a perception, however, masks the real problem surrounding Tokyo’s foreign policy: its continued dependence on Washington’s approval for geopolitical decisions like during the Cold War where it was imperative. In the new geopolitical landscape, globalizing and making the U.S.-Japan alliance flexible enough to incorporate a “Russia opening” could change this dynamic.

Putin’s spontaneous peace proposal last week effectively challenged this structural inertia that has long hindered Abe’s Russia diplomacy and Japan’s global influence at large. In other words, it was a well-crafted Russian riddle that questioned the Cold War alliance’s raison d'être in today’s new world disorder. As Abe looks to unleash his remaining foreign policy energy in his final term, he may as well turn the tables by accepting Putin’s offer while continuing to press for territorial concessions into the future. After all, what is there to lose at this point? As the Russian strongman is wont to say, the ball is now truly in Abe’s court.

Joshua W. Walker, Ph.D. ( @drjwalk) is Global Head of Strategic Initiatives and Japan in Washington, DC at Eurasia Group where Hidetoshi Azuma ( @hazuma_jpn) is an Executive Assistant based in Tokyo.