Is Russia Really Winning in Syria and Ukraine? 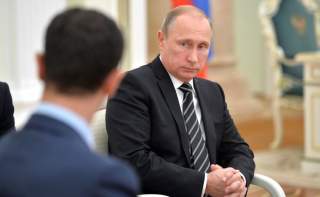 Moscow just can’t catch a break. Last month, the Kremlin was shifting the discussion on Ukraine away from Russia’s involvement towards Ukraine’s noncompliance with the Minsk Accords, and preliminary discussions were underway among European Union ministers to examine whether the sanctions imposed on Russia might be open to modification or suspension. In Syria, Secretary of State John Kerry and Foreign Minister Sergei Lavrov were promoting the idea of a joint Russian-American effort to craft a political solution to Syria’s civil war and to increased intelligence sharing to target Al Qaeda and the Islamic State. It appeared that Vladimir Putin was succeeding in his efforts to highlight Russia’s role as a responsible state actor in the international system—and to put the unpleasantness of the last several years behind him.

There was a growing expectation that some sort of relaxation of European sanctions on Russia, particularly the financial restrictions, as well as the prohibitions on technology transfers for new energy projects, would be forthcoming, allowing for some of the major new projects that had been delayed to resume in 2017. Indeed, in mid-September U.S. vice president Joe Biden warned that European unity in maintaining the sanctions regime could be at risk.

Two developments have not only stopped this trend in its tracks, but are likely to reverse any diplomatic gains the Kremlin hoped it had achieved. The first was the release of the Dutch report assigning culpability for the missile that brought down Malaysia Airlines Flight 17 over eastern Ukraine to Russia directly—in that the system was determined to have been supplied by and subsequently returned to Russia. While the Kremlin continues to dispute those findings, the report put the whole question of Moscow’s role in the conflict in Ukraine back on center stage. Just as the initial shootdown two years ago proved to be the galvanizing factor in pushing the European Union to impose much harsher and stricter sanctions against Russia—overwhelming the previous opposition of important European business lobbies, as well as governments inclined to preserve good relations with Moscow—the timing of the release of these conclusions, and the reaction in the Netherlands, now makes it much harder for any European government to decide to take the first step in rolling back the sanctions regime.

Even before the report’s conclusions were released, behind-the-scenes assessments were indicating that although a number of European states were dissatisfied with continuing sanctions against Russia, no single government wanted to take the heat by threatening to veto the renewal of the sanctions package. Now, that likelihood has further diminished. Most likely, the European Union will again extend sanctions for another six months, to mid-2017.

If the timing of the Dutch report wasn’t bad enough, the Russian-Syrian decision to pursue Grozny-style tactics to overwhelm the Syrian opposition in Aleppo—and signal to other opposition-controlled areas in Syria that it may be a good time to start negotiating with the Assad regime rather than continue to hold out for Western assistance—has further complicated matters. With European leaders now beginning to mutter the phrase “war crimes” in conjunction with how the Russian air campaign in Syria is being conducted, there have been early proposals that EU sanctions against Russia need not only to be continued and expanded but now broadened, covering actions not only in Ukraine but in Syria as well.

With some of the most pointed criticism coming from the United Kingdom, it raises the possibility that Moscow may not end up benefiting from Brexit after all. If, as initially hoped, a British departure from the European Union would liberate the United Kingdom from having to abide by EU sanctions on Russia, then the City of London could again become a key financial intermediary for Russian companies seeking access to international financial markets while British firms could circumvent American and European restrictions on technology transfers. When Foreign Secretary Boris Johnson, previously labeled a Russophile, who only months ago was sounding the need for a more conciliatory approach to Moscow, now warns that Russia risks becoming a “pariah state” due to its campaign in Syria, this suggests the depths of the problem the Kremlin now faces in repairing its relations with Europe.

What does this mean going forward? For one, it may accelerate Russia’s efforts to repair relations with Turkey and to proceed with the so-called “Turkish Stream” pipeline project, if its preferred option of doubling the NordStream line linking Russia to Germany will now languish in European regulatory limbo. The second is that it may cause Putin to become more willing to entertain compromise options in settling the territorial dispute with Japan over the Kuril islands—in the hopes that, in return, Prime Minister Shinzo Abe will breach the sanctions regime and open up new prospects for Russia’s development, particularly in the Far East. Finally, Moscow may decide that it needs to adopt a much more conciliatory approach to Europe. The Putin administration, for instance, has already announced its willingness to resume talks on Ukraine within the so-called “Normandy format” (encompassing Russia, Ukraine, France and Germany), which it had suspended earlier this year after accusing Kiev of sponsoring “terrorist activity” in Crimea.

Russia was clearly banking on being able to gain some concessions from Europe before the new U.S. administration took office in January. But it appears that the pleas of the outgoing Obama administration to maintain the status quo on Russia will be honored. Russia now has to see whether a new Asian gambit will give it the maneuvering room it seeks.