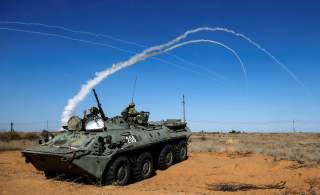 Russia is back in the Middle East. The Kremlin is methodically creating a systematic geopolitical challenge to the interests of the United States and its allies. Moscow’s behavior is driven by a quest for prestige and influence, and a search for markets of its arms and other goods—a classic great power pattern.

Oil is in the center of this quest, but it is not only issue. As oil prices are above $55/barrel and Saudi Arabia, the oil market maker, is facing its gravest political crisis since the 1920s when the monarchy was first established, Moscow’s production-limiting cooperation with Tehran and Riyadh puts Russia in the spotlight in the region. However, the Kremlin’s renewed activity in the Middle East is geopolitical, and goes beyond business. As in Soviet times, Moscow seeks to control governments, re-establish military bases, open maritime routes and expand exports. These great power ambitions suggest a broader shift in the regional balance, revealing a return to the nineteenth century strategic competition and raising serious questions about the future of American power.

Back to Great Power Competition

Russia has defined itself as an ever-expanding empire since time immemorial. During its eight-hundred-year history, the state shrunk only three times: in the early seventeenth century during the “Time of Troubles,” which led to the Polish occupation of Moscow; after the Bolshevik coup of 1917; and lastly, with the disintegration of the USSR in 1991.

Following the collapse of the USSR, Russia abandoned most of its military deployments in the Middle East, though it maintained some weapons sales clients. Being an empire was just too expensive. Syria—with its naval “supply and repair” base in Tartus and the air base in Khmeimim—was the only country Moscow clung to.

With the rise in oil prices after the 2008 Russian-Georgian war, and especially after Moscow’s 2014 invasion of Ukraine and the Crimea (oil prices dropped later that year), Russia embarked on a methodical rebalancing in the Middle East. The aim is to challenge the United States and its partners.

Some analysts believe that Syria may be a bargaining chip for Ukraine and the U.S.-imposed sanctions. However, the diminishing American regional presence in the Mideast, and Russia’s willingness to fill the void, suggest broader ambitions.

- A bridgehead against jihadism. Radical Islam has proven to be attractive to some 2,500 Russian citizens, who have fought in Syria and Iraq, as well as to hundreds more from the former USSR who chose to join ISIS. Their “homecoming” is a real threat. Moscow is the second largest city in Europe in terms of its Muslim population, after Istanbul.

- A theater of strategic competition with the United States. The ruling elite—Putin and his entourage, the military and security services leadership, and Russian TV—are defined by the defeat in the Cold War. All are obsessed with America’s alleged attempts to undermine or even dismember Mother Russia.

- Oil price influence. It is in Russia’s interest to increase its influence on oil prices, especially as the resource is vital to Russia’s economy. This influence can come through cartel-like agreements or by fanning the flames of conflicts—such as in the case of Saudi Arabia versus Iran. Nothing explodes oil prices more than the specter of war or a blockade in the Strait of Hormuz.

- A market for weapons. The conflict in Syria showcased the Russian military-industrial complex’s capabilities, from Kalibr medium range cruise missiles to SU-35 fighter jets and S-400 missile defense systems. These are on sale to the highest bidder because, as a Moscow saying goes, “weapons sales make good allies.”

- Russia’s resolve to support its allies. The Syrian war demonstrated Moscow’s resolve to stick with allies despite deteriorating circumstances. They do business with the likes of Saddam or Assad, whereas Washington remains picky and conditional.

The Obama administration believed that the best interest of the United States was withdrawing from “Bush’s wars.” Obama’s reaction to the Syrian crisis suggests that the Iran nuclear deal, and staying out of military conflicts, was more important than preventing the largest humanitarian catastrophe since World War II. The Trump administration’s first year has not presented coherent policies, either.

America’s response to Russian challenges in the Middle East hints at a regional power vacuum. The Europeans cannot fill it, and China is at least a decade away from being able. Therefore, by default and by intention, Russia is stepping in.

The United States is Always to Blame

Russia has woven a damning narrative of U.S. regional involvement in the Middle East, Europe, and the former Soviet Union, going back to Soviet-occupied Afghanistan. Some Russian “experts,” with 20/20 hindsight, depict the Soviets as anti-jihadi; whereas the United States supported the mujahedeen, including the radicals.

Like conservative Arab leaders and the Israelis, Russia saw the United States under Obama as abandoning allies and opening the door to the Muslim Brotherhood, which breeds chaos in Egypt, Syria, Jordan, Gaza and beyond. Moreover, the Russians ignored the systemic failure of the sclerotic, corrupt and brutal autocratic quasi-socialist regimes in Cairo, Baghdad, Tripoli, and Damascus, obsessing about real or imagined U.S. influence there.

So the Kremlin made a stand in Syria. This is Moscow’s faustian bargain: Assad, denounced by both Obama and Trump, remains in place for now; the Astana peace process is directed from Moscow and Teheran; and Russia’s military has accomplished its first successful power projection operation outside the Soviet borders since the debacle in Afghanistan decades ago.

Russia has restored its strained relationship with Turkey—Ankara is even buying Russia’s S-400 anti-aircraft missile systems. Turkey is also proceeding with the Turkish Stream pipeline project despite Western sanctions. One might argue that Russo-Turkish interests collide in Syria and the Black Sea area, but Ankara’s anti-Americanism may prevail in the short to medium term.

Even staunch U.S. ally Israel warmed up to Moscow after Obama’s Iran deal. Bringing Iranian influence to the Golan, and emboldening Hezbollah at the Jewish state’s doorstep, pressed a Jerusalem-Moscow dialogue. The Putin-Netanyahu relationship remains strong, despite a massive Russian military deployment in Syria which threatens Israel’s air dominance over the Levant.

Finally, in Iran, Russia now enjoys the right to temporary air base landing and refueling in Hamadan, and the ability to fire missiles through Iranian airspace from the Caspian Sea into Syria. The decades-old cooperation between Tehran and Moscow against the United States, its Sunni Arab allies and Israel is going strong.

Whether America’s disengagement will end, we do not know. History teaches us that the United States is a global power and will be dragged into major future power competitions, including with Russia, China and Iran. But without articulating coherent, credible policy goals; without improving its key relations, it may lose post-Cold War U.S. regional predominance positions, including in the Middle East. Supporting the Saudis in Yemen, cooperating with Iraq against ISIS, and a new Israeli-Palestinian “peace plan” do not yet amount to a coherent regional strategy.

This lack of coherence will complicate support for U.S. allies in the Gulf and Israel, and will further undermine relations with key Arab ally Egypt. Ultimately, America’s global standing will suffer, as Russia with its languishing economy, which is only one-fourteenth of America’s, prevails over the U.S. superpower in a key global geostrategic theater.

Ariel Cohen, PhD, is Nonresident Senior Fellow at The Atlantic Council and Director, Center for Energy, Natural Resources and Geopolitics at the Institute for the Analysis of Global Security. He is the author of six books and monographs, including Russian Imperialism: Development and Crisis, and over 1,000 articles. He regularly contributes to leading TV channels, including CNN, BBC, FOX, Bloomberg, and writes for The Wall Street Journal, The Hill, Huffington Post, and other publications. Máté Mátyás, a Junior Fellow of the Hungarian American Coalition currently at the Center for Energy, Natural Resources and Geopolitics, contributed to the research.

Editor’s Note: This article is adapted from a longer paper published by the Center for Global Policy.