Russia Sees Its Future in China and Eurasia 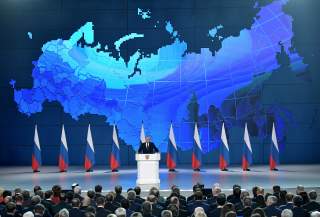 One of the most significant questions surrounding Russian foreign policy and U.S.-Russian relations is whether or not Russian president Vladimir Putin has an overarching strategy or if he is merely reacting to international events as they unfold. If one considers Putin’s actions and behavior since the mid-2000s (certainly since his speech at the 2007 Munich Conference), a clear grand strategy can be discerned. While Putin may in fact react to opportunities as they are presented to him, these lines of effort combine into a coherent global foreign policy agenda that seeks to reposition Russia as a great power in the emerging world order.

This vision is one in which Moscow is one of several centers of power, perhaps as U.S. hegemony gives way to a multipolar or even a Chinese-centric world order. It is a world in which Russia is perhaps distant from European values, but not so distant from European political and economic processes and institutions, as Eastern Europe as well as Western Europe are forced to “play nice” with Russia as a major energy source and political and military power. The same holds true for East Asia—particularly China. While Russia is not about to copy a Chinese model of economic or political development, it seeks to position itself in such a way as to embrace China in a soft alliance; one in which Moscow can maintain a position of sovereignty and independence as its eastern flank becomes home to the world’s largest economy, most populous state, and perhaps the next global hegemon.

Where does this leave Russia vis-à-vis the United States? Russia is likely to counter the United States where it can do so at an acceptable cost, as Putin weighs the punitive damages associated with its actions against the advancement of its foreign policy objectives. Moscow will seek to counter U.S. action simply because it resents American global hegemony, and it can do so because the U.S. political system’s democratic lag tempers its response while its alliance system, too, leads to the imposition of costs that do not outweigh the benefit of Moscow’s perceived gains.

In response to Russia being named as a target in the Pentagon’s 2018 National Defense Strategy, Russian foreign minister Sergei Lavrov stated that he “regrets that instead of having a normal dialogue” the United States “seeks to prove its leadership through such confrontational concepts,” and stressed that Russia is still “ready for dialogue.” Despite such proclamations, Russia has no real interest in a “reset” in U.S.-Russia relations in the near term. In fact, it welcomes (and seeks to contribute to) the weakening of the American political system and the relative decline of Washington’s influence in the world.

As Eric Posner points out, some Russia-watchers have engaged in “loopy speculation about Putin’s motives, much of it based on conjectures about his psychological makeup,” with some people thinking he is irrational or psychologically unstable. Posner also identifies those that think Putin simply “acts tactically in response to short-term opportunities [and] has no strategic vision.” Anne Applebaum is an excellent example. While she clearly identifies Putin’s tactic of sowing “organized chaos” where he can, she concludes that “The only point in doing that is to create the impression of crisis to make people nervous and have NATO members question NATO’s commitment to them and to create this impression of uncertainty.” This organized chaos includes “flying in British airspace, camping out near the borders of Baltic states and kidnapping foreign military officers,” which she states is a “strange strategy,” but it “keeps the Russian people reliant on him. It also serves as an effective distraction to keep his illegitimate rise to power an afterthought.” But Applebaum concluded that it “sounds odd to call it a grand strategy, and there's a way in which it really isn’t even about geopolitics.” “What we’re watching,” Applebaum concludes, “is someone trying to stay in power by changing the narrative, changing the story and making sure the revolution he fears doesn’t take place.”

Incidentally, this interpretation of Russian grand strategy does not differ much from that of Michael McFaul, who in 2003—more than a decade and a half ago—said that Putin’s grand strategy was simply to stay in power. As McFaul put it, Putin’s strategic plan was to put in place a regime that was “neither accountable to the people nor constrained by autonomous political actors.” As early as 2004, the future U.S. ambassador to Russia saw this plan, unfortunately, as succeeding, while others in the West didn’t even recognize it because each “stage of the plan’s realization has been clouded with controversy, subject to conflicting interpretations, its actors decked in gray rather than black and white.” But to be sure, McFaul saw a “systematic plan to roll back democracy.”

Writing only a few years later, Celeste Wallander sees Putin’s grand strategy as less than grand, and is in agreement with McFaul that domestic issues are at the center of Putin’s problems. But whereas McFaul sees Putin’s grand plan as rolling back democracy, Wallander sees the failure of democratization as a hindrance to Putin being able to carry through a real grand strategy. In her analysis of Russia’s strategic environment, national interests, and the type of state and economy that Putin believes is needed to secure them, Wallander concludes that Russian grand strategy is “neither grand, nor strategic, nor sustainable.” She leaves open, however, the question of whether or not Russia will survive as a great power in the twenty-first century, as the source of its power—the state and economy—are also the main sources of its weakness.

S. Frederick Starr and Svante Cornell have commented on those many Russian and foreign observers “who hypothesized that all these diverse initiatives on Putin’s part arose from a single strategy,” but that they “failed to make their case in a convincing manner.” That may be true, but the pair do an excellent job in arguing their point that the Eurasian Union is part of Putin’s overall grand strategy and his actions vis-à-vis the former Soviet states is a well-orchestrated attempt to establish a “new kind of union comprised of former Soviet republics and headed by Russia itself.” As they argue, events between the invasion of Georgia in 2008 and the armed seizure of Crimea in 2014 have forced policymakers and Russia-watchers to acknowledge the “possibility that the Russian Republic under Vladimir Putin has reorganized its entire foreign and domestic policy in order to pursue” this single strategic objective.

One observer who is in strong agreement with such an interpretation of Russian foreign policy is Michel Gurfinkiel, who argues that the Soviet “deep state” survived the collapse of the Soviet Union and that Russia’s “primary strategic goal [today] is to bring together all the Russian-speaking peoples into a single nation-state.” Additionally, Gurfinkiel sees the reestablishment of a single geopolitical unity if not a single state for the “Eurasian community, with Russia as first among equals.” This is perhaps more pernicious of an interpretation than Starr and Cornell foresee, but it has strong parallels.

But Putin’s ambitions reach beyond Russia’s near abroad and to the international system itself, in which it seeks to regain and retain its position as a great power. Gurfinkiel also sees this, and identifies the weakening or elimination of rival power centers in Europe as part of Moscow’s plan (i.e. NATO and the European Union). Finally, he foresees Moscow pursuing a world power role “by reactivating support for former Soviet client regimes like Baathist Syria and Cuba.”

British scholar Andrew Monaghan’s 2013 assessment in International Affairs of whether or not Putin has a grand strategy focuses on the cascade of new concepts, strategies and doctrines that attempt to frame plans in a long-term horizon to 2020 and beyond that Moscow has been publishing over the past decade. Following Putin’s 2012 reelection, a series of presidential instructions and new plans have been published to update this overhaul. Monaghan examines this commitment to strategic planning and seeks to determine whether or not it is tantamount to a grand strategy. While he suggests that Moscow has shaped a broad horizon and made some progress towards achieving the goals it has set out, Monaghan rightly argues that a grand strategy is more than simply formulating plans. He thus concludes by exploring the difficulties Moscow faces: the evolving and competitive international environment and a slew of domestic troubles (and his article was written before the annexation of Crimea and the resulting international sanctions). “Taken all together,” Monaghan concludes, while “Moscow is committed to strategic planning, a grand strategy remains a work in progress.”

Indeed, strategic planning may be becoming confused with strategy and grand strategy itself. In an excellent story on Reviewing Russian Strategic Planning: The Emergence of Strategy 2020 (published in 2012), Julian Cooper is also looking at the documents Monaghan does, but Cooper focuses specifically on the process and planning that went into developing Strategy 2020. But planning does not equate to strategy.

Along with Beijing, Moscow seeks a multipolar world in which U.S. hegemony comes to an end. As Alexander Lukin recently pointed out, the “common ideal of a multipolar world [has] played a significant role in the rapprochement between Russia and China.” As Grigory Karasin put it over twenty years ago, during the Yeltsin years the support of the two great powers for a multipolar world was “particularly important” at that time, “when the international community still face[d] the inertia of the way of thinking that characterized the Cold War, claims to exclusive leadership, and attempts to reduce the development of international relations to unipolarity.” This is even more so the case today, some twenty years later, when Russia has recovered significantly from the post-Soviet glut it found itself in during the 1990s and China has continued to grow steadily and modernize its military.