Russia Is Testing NATO in the Skies 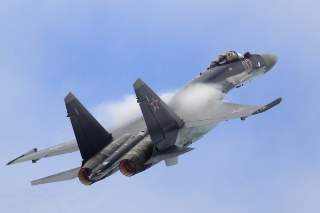 Last month, a Russian jet flew within five feet of a U.S. reconnaissance plane near the Baltic Sea. According to U.S. officials, the Russian Su-27 “rapidly” approached the U.S. RC-135 plane and acted “provocatively” by performing “unsafe” maneuvers. Russia’s Defense Ministry, for its part, blamed the U.S. plane for “making a provocative turn towards the Su-27” while being escorted away from Russia’s borders. Whatever the truth about this incident, it serves as a reminder of Moscow’s ceaseless belligerence toward NATO.

Earlier this year, NATO reported an increase in European Quick Reaction Alert aircraft ‘Alpha’ (Air Policing) launches in response to Russian military aircraft from 400 (of a total of 480) in 2014 to 780 (of a total of 807) in 2016. Admittedly, a change in the way that NATO records such events accounts for some of this increase. But there was, nevertheless, a marked increase in Russian military air activity being monitored and responded to across NATO’s two Combined Air Operations Centres (CAOCs) in Europe—at Uedem in Germany, which covers northern Europe north of the Alps, and at Torrejon in Spain, which covers southern Europe south of the Alps.

It is not just in Europe that Russian jets are buzzing the airspaces of NATO members. In April, two nuclear-capable Tu-95 Bear bombers were intercepted by two CF-18 fighter jets as they approached Canadian airspace. The following month, Russia’s Defense Ministry confirmed that two Tu-95 Bear bombers, flanked by two multirole Su-35 fighter jets, had been intercepted by U.S. aircraft flying over the Alaska Air Defense Zone. This was not a one-off incident. In 2014, the U.S. intercepted Russian aircraft on fifteen occasions; and since then it has averaged around ten intercepts each year.

During the Cold War, Soviet military activity in the vicinity of NATO members’ air space was commonplace. The point was to test out the defense systems of NATO members in the case of war. Today, the idea of war between Russia and NATO seems farfetched. So why does Russia rehearse such a scenario?

Russia’s military activities serve a propaganda purpose. By demonstrating that its military can come so close to the air spaces of NATO members states, with little (if any) consequence, Moscow is able to showcase its apparent strength and the alliance’s apparent weakness. Such activities are one of few things that allows the Kremlin to look strong at home as well as abroad.

They also serve a military purpose. Through them, Russia has been able to gain valuable information about the chain of command within the defense systems of NATO member states; the reaction times of various countries’ air forces and the capabilities of their pilots; and, the levels of cooperation between NATO members. Such intelligence-gathering is supplemented by the work of Russia’s human intelligence assets who recruit and run sources in the defense establishments of NATO countries.

Knowing how NATO members react in an emergency gives Russia crucial insights into how they will behave in war. But Russia’s activities are not only a test of the West’s military readiness and preparedness; they are also a test of its own abilities to meet the various threats identified by the Kremlin. The modernization of Russia’s military, which began in 2008, includes not only a substantial investment in arms procurement, but also an improvement of the command-and-control systems, enhanced coordination between ministries and an intense program of exercises.

There are, of course, important differences between Russia’s activities in North America and those in Europe. In Europe, Russian aircraft have carried ordnance and often fly with their transponders switched off or without flight plans. None of this has been reported in North America. But the type of planes involved informs some of this difference in behavior: a Su-27 fighter jet is, for example, a more effective tool to probe reactions and adopt an aggressive behavior than a slow and defenseless Tu-95 bomber.

There is little that individual NATO members can do to deter Russia’s aggression in the skies per se. Both Canada and the United States have a bilateral “Agreement on Preventing Dangerous Military Activities” with Russia, which establishes procedures to prevent the use of force in response to accidental military contacts, incidents and accidents. Other member states could pursue similar agreements with Moscow.

But Russia’s military activities near NATO skies should not be seen in isolation. They are part of a wider pattern of military assertiveness in the Euro-Atlantic region. So what can NATO do?

NATO’s recent reassurance measures are necessary to enhance deterrence of Russian military adventurism in eastern Europe, but they should be supplemented with robust measures to mitigate the risks should an incident occur as a result of Russia’s aggressions near the alliance’s skies. These measures could include increased military-to-military communication and greater public and private messaging, as well additional diplomatic and economic incentives.

Andrew Foxall is Director of the Russia Studies Centre at The Henry Jackson Society, a London-based international affairs think-tank.