Russia and the Precedent Problem 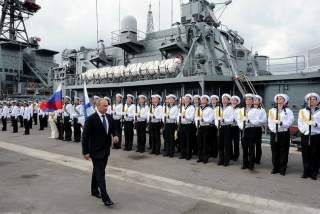 One constant of Russian diplomacy in the last several years has been for Moscow to vociferously criticize U.S. actions that go against Russia’s preferences, particularly those that represent any erosion of the Westphalian ideal of state sovereignty, as violations of international law—and then to claim an American precedent when it becomes convenient for Russia to similarly breach those principles. When Washington claimed a right to deploy military force against another sovereign state without the sanction of the United Nations Security Council, justified armed action on the basis of a “right to protect” or recognized a unilateral declaration of independence, Russia led the chorus of disapproval from the stalwart defenders of state sovereignty and territorial integrity (especially the rising and resurgent powers of the global south and east, like India, China and Brazil). The NATO intervention against Serbia over Kosovo in 1999 (without the blessing of the United Nations) and the subsequent recognition of an independent Kosovo (despite an explicit UN Security Council resolution calling for the province to enjoy maximal autonomy within the bounds of a Serbian state, and in the absence of Belgrade’s consent), initially condemned by Russia, were then cited as precedents to justify Russian military action in Georgia in 2008, and then to recognize the self-declared independence of South Ossetia and Abkhazia.

A similar parallelism can be seen between Syria and Ukraine. Russia has strongly condemned efforts by Western states to aid the opposition seeking to overthrow the government of Bashar al-Assad as violations of Syrian sovereignty and criticized efforts by Washington and its allies in the Persian Gulf to provide assistance to rebel organizations. But when the government of Ukrainian president Viktor Yanukovych was deposed, hours after a power-sharing and transition agreement was reached between Yanukovych and the opposition in the presence of a European Union delegation, Moscow was quick to adopt the same language used by Washington to describe the Assad regime: an illegitimate government holding no mandate to rule, and defending the right of an opposition to challenge the subsequent “junta” by force of arms if necessary to secure their rights.

In both Ukraine and Syria, Russia wanted to see broad-based coalition governments emerge, preferably still headed by presidential allies (Yanukovych and Assad) at the onset, which would guarantee the security of Russian interests in both countries and the continuation of reasonably friendly regimes in Kyiv and Damascus. The collapse of the Geneva process for a transition in Syria and the effective negation of the February 2014 agreement reached in Kyiv has been interpreted by the Kremlin to mean that no compromise between Western and Russian interests in both Syria and Ukraine would be possible, and that Washington was pursuing an all-or-nothing approach. Thus, at the beginning of this year, Russian strategy was to oppose Washington’s preferences for outcomes in both Ukraine and Syria.

The rise of the Islamic State of Iraq and Syria (ISIS) has the possibility to change that dynamic. ISIS targets both U.S. and Russian clients in the region and has threatened both to raise its flag over the White House, and personally target Vladimir Putin. Yet the situation has not yet reached crisis levels where it might serve to bring together Washington and Moscow the same way that 9/11 did. The Russian preference—for a broad anti-ISIS coalition that would include Assad and Iran as partners, and where the United States would be expected to reach compromise settlements with both Damascus and Tehran, and, in the case of Russia, rolling back the sanctions imposed on Moscow and signing off on a decentralized, neutral Ukraine—is not President Barack Obama’s preferred strategy. Thus, while both Moscow and Washington will work for the destruction of ISIS—Russia, through its ability to supply both Syrian and Iraqi forces—there is not likely to be much coordination of effort.

Moscow cannot object, from a strategic point of view, to U.S. airstrikes directed against ISIS targets in Syria, but from a political standpoint, it will continue to condemn U.S. actions as long as Washington does not seek Assad’s permission for such action and as long as the United States holds open the possibility that, at some point in the future, airstrikes might also be directed against Assad’s forces should the opportunity arise to assist U.S. proxies in their struggle.

But Russia is also going to keep handy the U.S. justification for the recent set of strikes inside Syria: the claim that Syrian government permission was not needed and that attacks against ISIS and another organization, the Khorasan group, are justified because of their threats to regional stability and, in the case of the latter, an apparent threat to the U.S. homeland itself. This expanded definition of national self-defense, to move beyond imminent attack to be able to strike at threats before they have fully reached their potential, utilized as well by the George W. Bush administration, has readily been taken up by the Kremlin, which cited its own right to go after groups deemed to be terrorist threats anywhere in the world.

Indeed, as much as Moscow complains about American unilateralism, Putin finds that he is more than happy to take the position that he too can interpret international law to his own liking. So it will probably only be a matter of time before we hear the curious echo of Obama’s recent statements about the Syria strikes when Russia seeks to justify a future military action in the face of condemnation by the West.

Nikolas K. Gvosdev, a contributing editor at The National Interest, is a visiting professor in international relations at Brown University and co-author of Russian Foreign Policy: Interests, Vectors and Sectors (CQ Press, 2013).