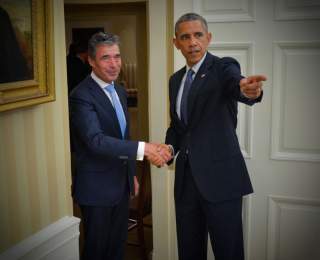 As today’s news from Brussels and Washington shows, the European Union and America are at center stage in devising sanctions on Russia for its aggression in Ukraine and the shooting down of Malaysian Airlines flight MH17. Yet the North Atlantic Treaty Organization (NATO), while modestly buttressing defenses in member states in Central Europe and the Baltics, has left Ukraine out in the cold. The Alliance has spent treasure and dispatched legions to fight in faraway Afghanistan, but neglected security interests closer to Europe. At its summit in Wales on September 4-5, NATO urgently needs to define a bolder vision to secure them.

The West is struggling to understand Kremlin intentions, yet Russian president Vladimir Putin has made no secret of them. In April 2008, according to Russia’s Kommersant newspaper, he told President George W. Bush at a NATO summit in Bucharest: "You don't understand, George, Ukraine is not even a state. What is Ukraine? Part of its territories is Eastern Europe, but the greater part is a gift from us."

Putin seeks to establish a "Russian World." It would bring together ethnic Russians, wherever they live, and protect, with armed force if necessary, those “who feel themselves to be part of the greater Russian community," as he said on June 24 in Vienna. The next week, Putin proclaimed a right to intervene in other nations to "defend the rights of Russians, our compatriots abroad." This is an expansive vision, but it ignores democratically expressed wishes of the countries concerned. Many of Russia’s neighbors are worried and seek more support from two main Western organizations—the EU and NATO.

They, too, have expansive visions, but of a different sort. They have an open door. The 1949 Washington Treaty states that NATO membership is open to any “European State in a position to further the principles of this Treaty and to contribute to the security of the North Atlantic area.” The 2009 Lisbon Treaty says any European State that respects and is committed to promoting the EU's values may apply to become a member of the Union. In other words, NATO and the EU define membership criteria based on behavior and values and the free choice of countries that want to join them, not on ethnicity, nationality or geopolitics. In the first two decades after the end of the Cold War, this merit-based vision enabled NATO to expand from sixteen to twenty-eight members, and the EU from twelve to twenty-eight (twenty-two states belong to both).

Soon after it gained independence, Russia began relations with NATO. Indeed, then-Russian president Boris Yeltsin wrote to then-NATO secretary general Manfred Woerner that Russian membership in NATO was a long-term political aim. In 1994, Russia joined the Alliance’s Partnership for Peace program; and in 2002, a high-level NATO-Russia Council was established.

In the late-1990s, however, Russia became bitterly opposed to NATO enlargement, which it saw (rightly or not) as motivated by Central European states' hostility to Russia and, therefore, a potential threat to Russia's security. In March 1997 at Helsinki, Yeltsin called expansion "a mistake, and a serious one at that.” Yet in some areas, such as multinational military exercises, Russia continued to cooperate with the Alliance.

Initially, Russia tolerated EU enlargement. As time went on, however, the Kremlin learned it had underestimated the inspiration of Europe’s democratic values, and the attractiveness of its rich market, to Russia’s neighbors. The Kremlin came late to realize Ukraine’s passion for the EU's rules-based model and democratic freedoms. If they can be made to work in Ukraine, a country even more corrupt than Russia, according to Transparency International, the Kremlin fears the appeal of freedoms could threaten support at home for its increasingly authoritarian and corporatist rule.

The West should understand the determination behind Putin’s binary logic of forcing neighbors to choose between the West and Russia. This approach has major implications for the future of Europe. If the West were to acquiesce, it might abandon Georgia, Moldova or Ukraine, three young democracies. But if the West insists on the rights of peoples and states to choose their own future, it will have to show greater political courage in buttressing them.

To improve their security and economies, Georgia, Moldova and Ukraine must commit to deeper reforms and the EU must help them succeed. The three countries have signed association agreements with the EU, but the hard part will be implementation. The EU will need to step up financial and technical assistance and political support, and do much better in explaining the costs and benefits of the agreements. The megaphone of misinformation pumped out by Russia, raising unjustified fears of a closer relationship with the EU, has far outweighed information available from EU delegations. America can reinforce the three countries’ reforms by expanding economic and security aid. This will require Washington to shift resources from other parts of the world.

The EU must apply standards and rules to Russia in the same way as it would to any other country, whether it is taking on Gazprom's monopolistic, politically-driven gas pricing and supply policies, or combating Russian money-laundering through financial institutions in London, Cyprus or Austria, or preventing Russia from profiting from the annexation of Crimea. The newly expanded sanctions are important, but consistent enforcement of the rule of law will have a more long-term impact on Moscow.

In Wales, NATO leaders must decide how the Alliance can do more to secure Ukraine and other important nonmembers that seek support. In 2008 at Bucharest, NATO leaders stated that Georgia and Ukraine would become Alliance members, but failed to set out time lines or road maps. Four months later, Russia invaded Georgia and sliced off the separatist enclaves of Abkhazia and South Ossetia. The Alliance should have learned a lesson about the risks of equivocating.

Since then, Georgia has been a major contributor to NATO operations in Afghanistan, made progress in defense reform, and had a peaceful change of government through the ballot box. Georgia is eager to join NATO. By comparison, Ukraine has never had a popular majority for this, although Russia's intervention has spurred more support for closer ties with the Alliance.

In June, NATO foreign ministers decided that, at present, neither Georgia, nor any other aspirant should be offered NATO membership. This stance may cause Putin to err in thinking his policy of destabilizing neighbors has earned him a veto over NATO enlargement. Thus, it is vital that in Wales, NATO leaders reaffirm the open door.

They should also make explicit what more Georgia has to do to become a member, and commit to admission when it meets the standard. The criteria should include further democratic progress—politically motivated arrests of supporters of the previous government must end—and economic reform. NATO leaders should not condition admission on a resolution of the conflicts over Abkhazia and South Ossetia; this would only give Russia a further incentive to stir up trouble.

What is happening in Ukraine will not trigger NATO's mutual-defense commitment. Yet the rebellion in eastern Ukraine, led by Russian intelligence officers and abetted by the potent weaponry and military strikes from Russia, is harming the credibility of the Alliance.

NATO members ought to realize that by refusing to supply defensive arms to Ukraine, they are harming not only its security, but also that of its NATO neighbors. At the upcoming summit, Alliance leaders should unveil substantial new measures to help Ukraine counter Russian aggression. For example, NATO and its members should do much more to help Ukraine gain control of its border with Russia, stem the flow of weapons to the rebels, and guarantee free navigation by merchant shipping into Ukrainian ports on the Black Sea.

In Wales, NATO must show that the eastern edge of the Alliance is not a cliff, beyond which the Alliance is impotent and uncaring. European Union leaders should not allow their continent to be defined by a new Berlin Wall, but by respect for universal values. Those in Europe’s east that share them will deserve more support than Ukraine is now receiving. And when ready, they will merit EU and NATO membership.

One day, even Russia may have a functioning democratic political system, treat its minorities and neighbors fairly, and seek the peaceful resolution of conflicts—at which point Western organizations could welcome it in.