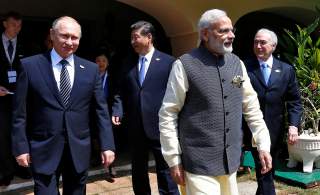 During Indian prime minister Narendra Modi’s visit to Vladivostok for the annual Eastern Economic Forum earlier this week, Moscow and New Delhi signed fifteen agreements on areas ranging from defense to energy. The Indian leader also pledged $1 billion in credit to the Russian Far East, a region in which the Kremlin has long sought to spur economic growth.

Although Modi was the forum’s chief guest this year, China was on the minds of many Western journalists observing the event. Unsurprisingly so. Chinese president Xi Jinping was the star of last year’s event and the convergence between Moscow and Beijing is one of the biggest geopolitical stories of this decade. With Russia moving ever closer to China, can Moscow manage to maintain its historically friendly ties with one of Beijing’s prospective regional rivals?

With Modi in attendance, the Eastern Economic Forum celebrated its fourth anniversary. The event was inaugurated near the start of Russia’s economic pivot eastward, when the Kremlin turned to Asia, especially China, for trade and investment after finding itself increasingly shunned by the West over its actions in Ukraine. Acquiring the funds to promote economic activity in Russia’s long underdeveloped Far Eastern regions was among Moscow’s top priorities.

Several years later, the policy is far from a clear success. Artyom Lukin, deputy director for research at the Far Eastern Federal University’s School of Regional and International Studies, says that the results of Moscow’s efforts to attract Asian investment to its Far East are so far lackluster.

“Unfortunately, Russia’s much talked about pivot to Asia has not yet brought an increase in Asian investment for the Russian Far East, including Chinese ones despite our close political partnership with Beijing,” he said.

According to Lukin’s research, there are only four major Chinese investment projects in the Russian Far East and their total value is less than a billion dollars. The four projects are a casino near Vladivostok, a coal mining deposit in the Trans-Baikal Territory, a gold mining deposit also in the Trans-Baikal Territory, and an iron ore mining company in the Jewish Autonomous Region.

Despite all of Moscow’s incentives, Chinese and other foreign investors are not flocking to the Russian Far East for two primary reasons. First, Western sanctions impose a sufficiently high cost to deter many investors. Second, extracting natural resources, the Russian Far East’s major selling point, is a capital-intensive task due to harsh environmental conditions and a lack of appropriate infrastructure. For prospective foreign businesspeople, a return on their expensive investment is far from guaranteed.

Many Chinese investors, consequently, have opted to seek raw materials in places like Brazil or Indonesia rather than in the Russian Far East.

With Chinese investment underwhelming so far, Moscow has started looking towards New Delhi. Lukin explained that featuring Modi as the chief guest at this year’s Eastern Economic Forum was partially motivated by a desire to spark a greater sense of urgency in Beijing.

“I think that by inviting Modi to Vladivostok, Putin is probably expecting to incite some jealousy from China, to show China that if you don’t want to invest in the Far East then the Indians will,” he said.

At the Eastern Economic Forum this week, Moscow and Delhi signed a number of high-profile memorandums of understanding. They include: plans to develop a maritime corridor from Vladivostok to the Indian port city of Chennai, a deal for India to manufacture spare parts for Russian military equipment, an agreement by Indian companies H-Energy and Petronet LNG to purchase Russian LNG, and a joint mining project between Indian state firm Coal India Limited and two Russian entities.

Moreover, Modi announced that India would extend $1 billion in credit to economic development projects in the Russian Far East.

In defense, the story is similar. Although Russia and India have a long and rich history of military cooperation, Beijing has eclipsed New Delhi as a partner for Moscow in several key respects. Viktor Murakhovsky, editor in chief of the Russian defense magazine Arsenal of the Fatherland, stated that while Russia is formally strategic partners with both China and India, its military coordination with the former is much deeper than with the latter.

“If we talk about interactions between the militaries of both countries, joint military exercises, and joint military planning, then our relations with India in this sphere are mostly formal and symbolic," Murakhovsky told me.

All of the Russian experts the National Interest spoke to expressed confidence that Moscow won’t have to choose between Beijing and New Delhi. They argued that despite Western media reports of a burgeoning rivalry between India and China, the two countries are far from adversaries. Looking at Sino-Indian relations in recent years, the Russian experts saw several encouraging signs, such as Beijing and New Delhi’s successful de-escalation of a border crisis in 2017, the absence of major military deployments from either country targeting the other, and the positive attitudes displayed by Modi and Xi towards each other.

These factors combined have led Moscow to conclude that neither Beijing nor New Delhi will object to its efforts to maintain friendly relations with the other. Moreover, some Russian analysts see an opportunity in the growing tensions between the West and India over Kashmir and human rights more broadly to bring the three countries closer together.

Andranik Migranyan, an informal advisor to the Russian presidential administration and a professor at the Moscow State Institute of International Relations, told me that by censuring Modi, the West is repeating the mistakes it made towards Russia in the lead up to the Kremlin’s post-2014 pivot to China.

He predicted that if the West continued applying pressure on India, then New Delhi might move to resolve its disagreements with Beijing and join it and Russia in a coalition against Western human-rights diplomacy.

“In the same way that American actions pushed Russia into China’s embrace, growing Western depiction of Modi as an authoritarian populist demagogue and accusations that India is violating democratic norms and human rights could push India into an embrace of Russia and China, despite the contradictions between Beijing and New Delhi,” Migranyan stated.

While many prominent Western media outlets and the British government condemned India’s recent moves to consolidate control over Kashmir, Russia defended them. China, on the other hand, sided with Pakistan and called for the UN Security Council to review the issue.

Moscow’s solidarity did not go unnoticed in New Delhi. At the forum, Modi spoke of Russo-Indian common front against Western interference. Standing alongside Putin, the leader of the world’s most populous democracy proclaimed, “We are both against outside influence in internal matters of any nation.”