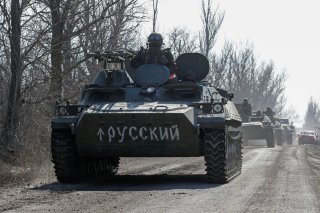 EVEN BEYOND the genuine horrors of the war in Ukraine, Western officials—as well as Western journalists—are prone to portray it in highly emotional and overly simplified terms. The dominant narrative goes essentially like this: the turmoil and bloodshed are all because of Vladimir Putin, an extraordinarily aggressive, evil individual who may even be out of his mind. Absent his insatiable lust for aggression and a desire to rebuild the Soviet Union, we are told, there would be no war between Russia and Ukraine. The extent of the Kremlin’s aggressive intentions toward its neighbor began to become evident in 2014, when Putin moved to annex Ukraine’s Crimean Peninsula and then conducted illegal military incursions in the name of supporting bogus separatist movements in Ukraine’s Donetsk and Luhansk regions.

How persuasive are such accounts? One problem is that they ignore or at least minimize the extent to which NATO expansion generated and exacerbated tensions between the United States and Russia as well as evidence of other problems, both in the bilateral Russian-Ukrainian relationship and within Ukraine itself. Yet all of those factors set the stage for the Russia-Ukraine war that erupted in February 2022.

Relations between Kyiv and Moscow often were marked by a chill even during the years immediately following the dissolution of the Soviet Union in 1991. Similarly, Ukraine’s internal political, economic, and ideological tensions were evident early on. Indeed, openly secessionist sentiments in both Crimea and the Donbas surfaced in the 1990s. Populations in both regions chafed at being ruled by nationalist, anti-Russia elements based in western Ukraine. Instead, they sought greater respect for Russian as an official second language in Ukraine and wanted closer overall cultural and economic ties with Russia. The current armed conflict has deep and tangled roots, ones that bear elucidation.

UKRAINE’S SUDDEN independence in late 1991 left both Moscow and Kyiv unprepared to deal with each other. That sudden shift in the conditions governing their relations led to an often icy and contentious bilateral relationship during the 1990s. While the creation of the Commonwealth of Independent States did prevent a total split between Kyiv and Moscow, Ukraine’s newfound independence occurred against the background of persistent attitudes among both Russian elites and ordinary citizens that Ukraine, like Belarus, is part of one “Greater Russia.” That perspective later became a very prominent and persistent theme in Putin’s speeches and policies, but it was visible much earlier. Even Russian president Boris Yeltsin asserted Russia’s right to raise border issues with the other states emerging from the carcass of the USSR—especially with those countries that had significant Russian minorities, such as Ukraine with its heavily Russified eastern regions. As such, disputes arose quickly between the two newly independent countries.

One thorny issue was whether Russia would inherit and control the entire former Soviet Black Sea Fleet based in Sevastopol on Ukraine’s Crimean Peninsula, or whether there would be some division of naval assets. Most former Soviet sailors remained loyal to the Kremlin, but others declared their allegiance to newly independent Ukraine. The feuding Black Sea Fleet sailors nearly came to blows several times during the 1990s. The fleet problem, in turn, was a subset of a larger, more emotional issue of whether Crimea rightly belonged to Ukraine or whether it should be returned to Russia. Soviet dictator Nikita Khrushchev, for reasons that were never entirely clear, had gifted the peninsula to Ukraine in 1954, even though Crimea had been part of Russia since 1782. At the time, his decision did not seem all that significant as both Ukraine and Russia were subordinate administrative units of the USSR. With the onset of independence for both Ukraine and Russia, though, the topic acquired a new relevance—and potential for trouble.

The narrow issues of control over the Black Sea Fleet and the status of the Sevastopol Naval Base were resolved gradually, culminating in the 1997 Fleet Partition agreement. The accord, in which Kyiv recognized Moscow’s control of most fleet assets in exchange for $526 million in compensation, also codified Russia’s lease on the Sevastopol base until 2017 and significantly eased tensions on that set of issues. The situation improved even more in 2010 when Ukraine’s new, pro-Russia president, Victor Yanukovych, signed an agreement extending the lease until 2042.

However, Russian leaders had displayed nervousness when a pro-NATO Ukrainian government took power following Ukraine’s “Orange Revolution” in 2004. Their unease did not ebb until Yanukovych became president following elections in 2010. The Western-assisted Maidan Revolution in 2014 triggered alarm and anger rather than mere nervousness. Russia settled the issue emphatically, moving not only to secure permanent possession of the Sevastopol base, but annexing the entire Crimean Peninsula, an act that Ukraine, not to mention the United States and its NATO allies, refused to recognize.

It was not surprising that Crimea was the most contentious issue in the early and mid-1990s (as it would again become from 2013 onward). Political tensions on the peninsula had been simmering since the onset of Ukraine’s independence. During the first half of 1992, Crimean political leaders took several steps toward giving the region full autonomy and self-government, contrary to Kyiv’s wishes and Ukraine’s constitution. In June of that year, the contending parties reached a delicate compromise. Under a new regional constitution, Crimea was designated an “autonomous republic” with a special political and economic status. However, the document also specified that Crimea remained an integral part of Ukraine.

The spirit of compromise did not last long. In October 1993, the Crimean parliament created the new post of President of Crimea, making a clear bid for greater autonomy, if not outright independence. The election of an outspoken pro-Russia nationalist, Yuri Meshkov, to the presidential post in January 1994 ratcheted tensions up several notches. Two months later, the new administration conducted a referendum on secession, despite an explicit prohibition from Ukraine’s parliament. The vote showed an overwhelming majority in favor of Crimea’s independence.

The two sides continued to jockey for position, with the Kremlin quietly encouraging the Crimean separatists. Nationalist Ukrainians, on the other hand, sought to stifle the sentiment for secession. In March 1995, the Ukrainian parliament cracked down hard on Crimea, abolishing the 1992 Crimean constitution and invalidating all laws that the Crimean legislature had passed that were in any way inconsistent with Ukraine’s laws or constitution. The parliamentary edict also removed Meshkov from office and abolished the post of President of Crimea itself.

A badly weakened Russia could do little about these developments—any more than the Kremlin could counter the initial phase of NATO’s expansion eastward in 1999. Instead, the Kremlin signed the Russian-Ukrainian Friendship Treaty in May 1997 in an attempt to smooth bilateral tensions. However, by signing that document, Moscow recognized Ukraine’s current borders, including Kyiv’s sovereignty over Crimea. It would become apparent, however, that bilateral tensions and animosity were merely put on hold, not resolved.

Clearly, the dispute did not go away. Large anti-Ukraine demonstrations in Crimea flared up on several occasions in subsequent years. The Kremlin settled the issue decisively in the spring of 2014. Putin was furious that the United States and several European Union countries had aided pro-Western demonstrators to unseat Ukraine’s elected, generally pro-Russia president, Viktor Yanukovych, and install a pro-NATO regime. Russia responded by taking control of Crimea, holding a snap referendum on independence, and then approving the “request” of a newly independent Crimea to join the Russian Federation.

It is crucial to recognize that tensions over Crimea began well before the events of 2014. It is equally crucial to understand that the belief among Russians that Crimea was rightfully part of Russia long predated Putin’s presidency and was extremely strong across the political spectrum. During the mid-1990s, even St. Petersburg mayor Anatoly Sobchak, a staunch pro-Western democrat, contended that Crimea was indisputably Russian soil. Indeed, he stated that Russia should claim the borders that it had when it became part of the Soviet Union in 1922.

THE STATUS of nuclear weapons on Ukraine’s territory was another potent source of contention between Ukraine and Russia. Initially, there was significant sentiment in Ukraine to retain those weapons. It was not a minor issue: for a moment, Ukraine was the world’s third-largest nuclear power, possessing 1,240 warheads on 176 intercontinental ballistic missiles (along with their extensive launch control infrastructure), 700 nuclear cruise missiles on forty-four strategic bombers, and nearly 3,000 tactical nuclear weapons.

Although Ukraine’s president, Leonid Kravchuk, adopted a conciliatory approach, embracing the goal of a nonnuclear status for his country, the attitude of other members in Ukraine’s political elite was murkier. Most notably, Kravchuk’s prime minister, Leonid Kuchma, sided with factions in parliament that were reluctant to give up the nukes. Their resistance was especially tenacious unless Ukraine received both generous financial compensation and multilateral security guarantees. In January 1994, Kravchuk seemed to prevail when he, Boris Yeltsin, and Bill Clinton signed a trilateral statement in Moscow in which Ukraine pledged to eliminate its arsenal in stages, transferring those weapons to Russia for dismantlement.

Kuchma’s election as Ukraine’s president in July 1994, though, created new doubts about whether Kyiv would actually relinquish those weapons or continue to use them as bargaining chips. Within days of his election, Kuchma suggested that Ukraine reconsider its declared intention in the January agreement to join the Nuclear Nonproliferation Treaty (NPT) as a nonnuclear state. He indicated further that Kyiv would insist on far more sizable aid flows from both Russia and the West before it would take steps to relinquish the warheads or join the NPT.