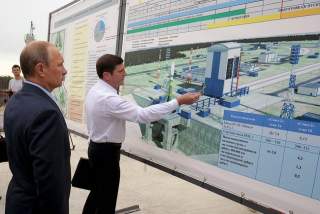 Editor’s Note: The following is the fourth and final of a series of articles from the Center for the National Interest’s new report: Costs of a New Cold War: The U.S.-Russia Confrontation over Ukraine. You can read the full report here.

The crisis in Ukraine pitting Russia against the West reveals competing narratives regarding precipitants of and reactions to the February ouster of Viktor Yanukovych and the troubling episodes that have since unfolded in Ukraine’s south and east. This paper will assess the economic context of U.S. decision-making in response to the crisis in Ukraine, examining what is at stake economically for both the United States and Russia, the policies pursued and their potential consequences, and options to consider going forward.

For nearly a quarter-century since the breakup of the Soviet Union, the United States and Russia have struggled to adapt to changes to the international system brought about by the Soviet collapse, the end of bipolarity, and the departure from the ‘stability’ of the Cold War era. The Cold War may have been expensive and dangerous, but it was also at least somewhat predictable. Analysts and decision-makers grew comfortable operating within a governing framework of organizing principles built over decades.

The purpose and predictability of that framework were not replaced by a set of equally convenient parameters for U.S.-Russia engagement. The bilateral relationship ebbed and flowed through periods of ‘warmer’ ties, which were occasionally buttressed by shared interests, although they were frequently a function of leadership personalities and the relief felt by the absence of conflict. As Russia emerged from a decade of upheaval that was the 1990s, opportunities for more serious common pursuits between Moscow and Washington emerged, yet so too did divergent national interests that were not fully understood without the benefit of hindsight. Cooperative successes were achieved, yet competition and conflict also endured.

A decade ago, in June 2004, the Orange Revolution in Ukraine introduced a new variable into Russia’s relations with the West. The view of the world from Moscow changed suddenly and significantly, and subsequent discussion of a NATO Membership Action Plan for Ukraine ensured that this was not a fleeting concern in Moscow (and the August 2008 Russia-Georgia war confirmed for U.S. policymakers that we had indeed entered a new phase in the relationship). Through electoral gaming, exertion of economic influence, and leverage of energy supplies, Russia and the West competed in a sometimes subtle and lengthy tug-of-war over Ukraine, culminating in the bidding war between the EU and the Russia-led Customs Union (now the Eurasian Economic Union) last fall, which precipitated the crisis in Ukraine.

As pro-EU and anti-Yanukovych protests transformed Kyiv’s Independence Square into the Maidan movement in late 2013, few on either side could have envisioned where U.S.-Russian relations would be in mid-2014, in the midst of the worst crisis since the end of the Cold War, with Ukraine engulfed in a low-grade civil war.

Russia’s Ukraine strategy and the annexation of Crimea in particular have been a boon politically for President Putin at home, as his approval rating soared to 72% in March, 82% in April, and 83% in May. But this conflict comes at a time when Russia can least afford it economically. Russian economic performance has deteriorated since its recovery from the global recession, and the country’s economy has been sliding into a period of stagnation for more than a year now. Whereas Russian GDP grew 3.4% in 2012, growth declined to 1.3% in 2013. The projections for 2014 began at an optimistic 2.5%, but the consensus view has since been reduced by half—to approximately 1.1-1.3%, with the OECD’s revised projection on the low end, at 0.5%.

These estimates are not weighted for Ukraine-related risks and impact. Leaving aside the effects of investor behavior and punitive actions taken against Russia, the best-case scenario growth projection hovers around 1.3%. When potential fallout from Ukraine is factored in, this is commonly viewed as enough to tip Russia into recession, with expected performance dropping to -2%. The IMF already considers Russia to be in recession.

Bloomberg recently conducted a survey of 10 economists, who assessed the probability of a Russian recession occurring this year to be 33 percent. This same group of economists largely concurred that the consumption effect supporting Russia’s recent rebound has run its course, and that the primary driver of any near-term economic growth must be investment.

In the second quarter of 2014 (Q2), the Russian economy grew by .8% year-on-year (y-o-y) compared to Q1 2013, the slowest pace in five years since the recession, which followed .9% y-o-y growth in Q1 and a contraction of .5% from Q4 2013. Russian and international observers agree that declining investment is the culprit—Russia’s own Ministry of Economic Development reported that fixed capital investment declined 4.8% in April y-o-y.

Russia desperately needs investment to fulfill the sustainable growth imperative and to diversify away from the dominance of the oil and gas sector. Whether ‘real’ foreign investment or repatriated Russian capital (for example, from Cyprus, perennially one of the top ‘foreign’ investors in Russia), capital inflows are the single largest factor impacting Russia’s economic development in the near term. As discussed below, this is the reality in which policy responses to Russia are being formulated, which in turn has Russian officials devising mitigation strategies and counter-measures.

Interdependence in a Global Economy

The U.S.-Russian economic relationship features only a limited degree of interdependence, at least when analyzed against the likely effectiveness of U.S. sanctions as a strategy in itself—hence the importance of a coordinated multilateral approach with the full support of the EU, in particular.

U.S.-Russian bilateral trade remains relatively small compared to both countries’ trade with the EU or China, for example, but the bilateral commercial relationship has experienced a period of rapid growth in recent years, as American and Russian firms alike have benefitted from expanded ties and the development of new markets. After totaling just $24 billion in 2009, U.S.-Russian trade jumped by one-third, to $32 billion, in 2010, and increased again by a similar proportion in 2011 to $43 billion. Since then, however, two-way trade declined to $40 billion in 2012, and dropped another 5%, to $38 billion, in 2013. This year’s performance to date is roughly in line with 2013 (approximately $9 billion in Q1).

Each country ranks among the top 25 of the other’s trading partners (e.g., Russia is the 23rd-largest trading partner of the U.S.). While these are not huge export markets, it is also true that the trade relationship has historically tilted in Russia’s favor, with the U.S. running a considerable trade deficit due to imports of Russian commodities (including primarily oil, steel, chemicals, and precious metals). As a result, while the Russian market for U.S. goods and services has continued to expand in the first two years of Russia’s WTO membership, it is safe to assume that a smaller swath of Russian companies has more at stake in terms of potential trade disruptions than do their American counterparts, at least in the short run (though many U.S. companies have moved well beyond an initial trading strategy to build market share and are now major strategic investors in Russia for the long term).

By contrast, Europe is Russia’s largest trading partner. The comparisons to EU-Russia trade bring into stark relief the importance of a coordinated policy response between the United States and Europe. Russia’s trade with Europe is more than tenfold the U.S. level, at $440 billion, with the EU representing roughly one-half of Russia’s imports and exports. Three-quarters of Russia’s exports to Europe come from its energy sector, as Europe imports roughly one-third of its natural gas from Russia (and half of that amount transits through Ukraine).

More specifically, Germany has been a driving force behind European policy on Ukraine due in large part to both its economic clout and its commercial stakes in Russia. Russian-German trade was $111 billion in 2012, before declining to $105 billion in 2013. Also, unlike the U.S. trade deficit, German exports nearly equal the imports from Russia. German business leaders have noted that some 300,000 German jobs depend on the country’s economic relationship with Russia. And energy supplies are a primary constraint on decision-makers, as Germany receives three-quarters of its oil and gas from Russia.

Beyond the trade case, equally compelling are the investment data underpinning the EU-Russian economic relationship. Roughly 75% of FDI into Russia originates in Europe, and some 6,000 German companies alone are said to have staked an active presence in the Russian market.

The comparison to the EU’s economic clout vis-à-vis Russia clearly establishes the logical difficulty of enacting a unilateral American sanctions strategy that will achieve its desired objectives.

Given Russia’s increasing integration into the global economy and the vital link between Europe and Russia, it is not surprising that economic leverage emerged as the primary tool in a coordinated U.S.-European policy response to Russia’s aggression in Ukraine.

The question, then, is how leverage should be applied in a manner that is based upon realistic assumptions; i.e., how can and should influence be exerted, and toward what end(s)? Once the mechanics of inflicting ‘pain’ on Russian targets are confirmed, what are the costs associated with the action, beyond just the intended target scope—how are they felt and by whom?