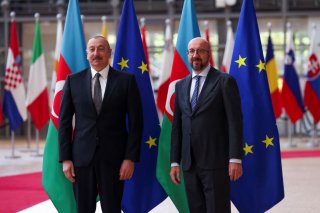 “Today Azerbaijan and the European Union (EU) have become closer to each other more than ever,” Peter Michalko, the EU ambassador in Azerbaijan, stated in an event dedicated to Europe Day on May 12, in Baku. According to Lithuanian ambassador Egidijus Navikas, the relations between Azerbaijan and the EU intensified following the 2020 Second Karabakh War, as European companies are actively involved in reconstruction work in the territories liberated from the Armenian occupation and the EU is playing an influential mediating role in establishing peaceful relations between Azerbaijan and Armenia. The consequences of Russia’s invasion of Ukraine—in particular, the regional political tensions; security threats and challenges, disruption of the traditional connectivity routes, and the energy crisis in Europe—have created further incentives and necessities for closer bonds between the EU and Azerbaijan.

The basis for these relations is multilayered and propitious. Azerbaijan has signed strategic partnership agreements with nine members of the EU and developed strong ties with many of them.

With a $15 billion annual trade turnover, the EU is Azerbaijan’s main trading partner, accounting for around 45 percent of the country’s total trade and amounting to two-thirds of the EU’s trade with the whole South Caucasus region. The EU is the major investor in the Azerbaijani economy, having invested up to $20 billion in different projects in Azerbaijan.

The South Caucasian republic supplies around 5 percent of the EU’s oil demand and exports gas to the European market since 2020. In December 2020, Azerbaijan began exporting gas to Europe through the Southern Gas Corridor (SGC), a project worth $33 billion. Although the share of the Azerbaijani gas is less than 2 percent in the overall gas imports of the EU, this maintains strategic importance for some importers in Eastern Europe.

Amidst the European efforts to reduce gas dependency on Russia, Azerbaijan’s gas exports are seen as an alternative. For example, a ten-point plan to reduce Europe’s dependence on Russian gas proposed by the International Energy Agency includes Azerbaijan as an alternative source in this context. The intensifying visits to Baku by European officials to explore the opportunities to increase Azerbaijani gas exports in recent weeks promise to deliver positive outcomes in the near future. Both sides are strongly interested in this cooperation.

Azerbaijan is also an important actor in Europe-Asia connectivity. Due to disruptions along the trans-Russia northern route following the Ukraine war, the Trans-Caspian International Transportation Route, also known as Middle Corridor, has gained momentum. Over the last few months, numerous international logistics companies have decided to expand their Europe-Asia operations through the Middle Corridor.

Azerbaijan, Kazakhstan, and Georgia are interested in developing this transportation route, whose potential is estimated at 10 million tones or 200,000 containers per year. The three countries plan to establish uniform tariffs for domestic shippers and improve and simplify the work of carriers in the corridor of the track. This will boost the transit role of the South Caucasus for Europe-Asia connectivity and serve as another encouraging factor for closer engagement of the EU with this region.

Against this background, the EU has started to play an active role in the Armenia-Azerbaijan peace process in recent months. The leaders of the two South Caucasian republics met online on February 4, in-person on April 6, and on May 22 via the mediation of the European Council president Charles Michel. The sides have achieved some progress in this process, launched the preparatory work for a peace treaty, and agreed upon the establishment of an international commission on the delimitation of the Armenian-Azerbaijani borders that have not been delimitated since the two countries regained their independence from the Soviet Union in 1991.

It is worth noting that since the beginning of this year, the representatives of the two South Caucasian republics have met exclusively via the mediation of the EU, while the only Russia-mediated meeting—that of the foreign ministers held on May 12—took place on the sidelines of another major event and brought about no novelty in the negotiations. This is the reason why Russia feels irritated, if not threatened, by “shameless attempts of Brussels to appropriate […] the agenda proposed last year by the OSCE [Organization for the Security and Cooperation in Europe] Minsk Group co-chairs (solving urgent humanitarian issues, [and the] preparation of a peace treaty between Baku and Yerevan).

It is believed that one of the major reasons for Armenia’s recent reluctance to fulfil the commitments it has undertaken at the EU-mediated meetings (e.g., its refusal to meet with the Azerbaijani side on April 29 and on May 7-12 when the sides would create the delimitation commission in the agreed timeframe) is the pressure by Russia and the pro-Russian opposition groups. The fact that Armenian prime minister Nikol Pashinyan made these moves following his April 19-20 Moscow visit, which came in contrast to his more constructive statements prior to this visit, substantiate these claims about the Russian intervention in the process. However, there is optimism in the region that the EU’s efforts to push for a breakthrough in the negotiations will deliver some results in the upcoming months.

All these developments encourage Azerbaijan and the EU to deepen their bilateral ties and open new chapters in their relationship. Hence, it is expected that the two sides will finalize their talks on a new framework agreement (that has been in negotiations since 2017) and sign it in the near future. According to President Ilham Aliyev, the process was delayed due to the pandemic-related restrictions and the 2020 war between Armenia and Azerbaijan. He has, however, reiterated that more than 90 percent of the agreement is ready. “We have an agreement, but it was signed many years ago [in 1996]. The new agreement is very comprehensive. It incorporates the new realities after Second Karabakh War and will definitely address the new situation in the world,” he stated on April 29.

Dr. Vasif Huseynov is a senior advisor at the Center of Analysis of International Relations in Baku, Azerbaijan.