Is Russia a U.S. 'Adversary' or Just a 'Competitor'? 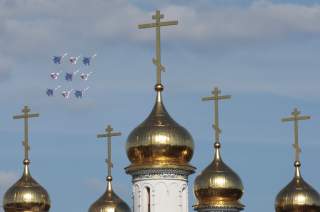 Writing in the wake of the Kerch crisis, Jill Dougherty, summing up the latest discussions of the Mayflower Group, concluded: “America's current strategy toward Russia, simply put, is not working; it is instead tying our hands. It’s making Russia more aggressive externally and less democratic internally.”

In theory, U.S. policy vis-à-vis Russia should be grounded in the twin requirements of deterring and/or reversing Russian actions which we object to or which threaten our interests (or those of our allies) while simultaneously engaging to find areas of mutual concern where a cooperative approach produces positive outcomes for both parties. Almost no one would object to this formulation—but the problem remains that operationalizing it has proven to be very difficult for the United States. This derives, in part, from continued adherence to the view that the world order as it existed in the 1990s—the so-called “unipolar” moment—is, in fact, the norm rather than an aberration. In that period, no other power or group of powers could prevent the United States from directing the international agenda; either they were largely in agreement with it or they lacked the wherewithal to impose serious costs on Washington. Generally, the principal limitations on the United States were largely self-imposed, in terms of the burdens the U.S. public, anxious for a peace dividend after the Cold War, was willing to bear.

The world as we move into the middle decades of the twenty-first century is starting to look more “normal” in terms of the overall patterns of human history. The United States remains the globe's predominant military and economic power, to be sure, with additional vast reserves of soft and “sticky” power that helps incentivize other countries to align themselves with U.S. preferences. But other countries have resurged or obtained greater wherewithal to push back on U.S. agenda-setting or to insist on agendas of their own. The United States policy establishment, however, lacks experience and, daresay, comfort, with dealing with rivals.

In particular, Washington must come to grips with the distinction between a “competitor” and an “adversary.” A competitor seeks advantage, but usually will agree to shared rules of engagement, and does not necessarily see competition as zero-sum or even hostile. We have a tendency, however, to lump competitors as being no different that adversaries, or to assume that the very act of competing with us (in trade, technology or for advantage) must be interpreted as a sign of hostility. This has, in recent years, created new tensions with long-standing security partners in both Europe and Asia.

Getting this distinction right with Russia also matters. Russia has moved from a 1990s position of seeking inclusion with the West into a position of a competitor. Is that competition—for geopolitical influence and geo-economic advantage—manageable within an overall cooperative framework? If it is not, there are implications for U.S. policy—which would require the United States to decide how much of its time, resources and attention should be spent on meeting a Russia challenge (and what other challenges can be spared U.S. attention). It also returns us to the question of whether the primary driver of U.S. strategy in Eurasia for decades—to prevent a rapprochement between Moscow and Beijing that incentivizes Russia and China to cooperate more with each other against the United States—should remain operative.

Dealing with Russia as a serious competitor—even given its economic size and population endowment—also requires facing up to the challenge of how to compete. A serious competitor has at its disposal the ability both to accept punishment within acceptable losses (which appears to be the tally sheet for the effectiveness of current Western sanctions on Russia) as well as to raise costs (as Russia has done in the Middle East). Russia is able to do this because it possesses, for the near and medium term, sufficient reserves of power that cannot be wished away or for which a strategy of predicting negative trends for Russia after 2050 is not feasible. In meeting that competition, the U.S. political establishment must tackle whether the goal is to try and deter (or compel) Russia to change course, or to push for the removal of Russia as a major power by moving beyond deterrence and compellence to provoke or accelerate factors that would lead to a decline in Russian power. The former strategy is consistent with dealing with a competitor; the latter for an adversary. It also goes without saying, however, that the latter approach is much costlier and riskier, especially when dealing with a nuclear-armed power.

I steal Jill's point as my own conclusion:

“We need to re-think how we deal with Russia. Confrontation combined with an endless cycle of sanctions isn't the answer, even if sanctions sometimes are justified. But a “Let's just be friends” approach won't do either. For our own security, we need a bi-partisan, sustainable policy based on a realistic definition of why we even care about Russia.”

That means tackling not only what we don't like about Russian behavior, but what we are prepared to do, and pay for.