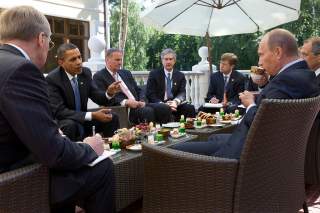 It wasn’t simply about meddling in the elections. President Obama’s widely anticipated sanctions against Russia were designed as a broader strike against Russian intelligence operations in the United States and elsewhere. As such, they underscore just how far relations have deteriorated in recent years. They stand as a departing admonition to President-elect Trump as to how tough it is going to be to restore them, no matter how “nice” he might think it would be to cooperate with Russia against terrorists in Syria and on other matters. And the sanctions themselves will complicate and prolong any effort by the next president to normalize relations.

To be sure, concern about Russian interference in the elections lies at the heart of President Obama’s measures. He sanctioned the two intelligence services—the military's Main Intelligence Service (GRU) and the civilian Federal Security Service (FSB)—that routinely hack into American cyber networks, and the sanctioning of four top GRU officials personally—and no FSB officers—indicates which service the Administration believes has been the more aggressive hacker.

But the expulsion of 35 intelligence officers under cover as diplomats at Russian missions in Washington and San Francisco and the closing of two Russian-owned facilities in Maryland and New York are not a response to hacking, nor are they intended solely as retaliation for Russian harassment of our diplomats in Russia, as the White House stated. More importantly, they are meant to disrupt Russian intelligence operations that go far beyond cyber intrusions. In addition, the release of a Joint Analysis Report on Russian cyber intrusion techniques will have an impact well beyond our borders. The Administration wants it to be studied attentively in Europe and elsewhere. Finally, the Administration has promised covert operations of its timing and choosing, which will likely be designed to send messages about more than just our opposition to Moscow’s hacking activities. Russia’s intelligence services will, of course, eventually recover from this setback, but at a cost to their current operations.

The American political class has been largely supportive, even if some want harsher measures and wonder why the Administration waited so long to push back against Moscow. Few outside of a small circle around President-elect Trump will question the Administration’s assessment of Russia as hostile actor. That assessment will only be reinforced when Moscow responds, as it has promised to do, even if President Putin has ruled out reciprocal expulsions of American diplomats for at least the time being despite the recommendation of Foreign Minister Lavrov.

Trump will find it hard to undo Obama’s actions after January 20, if he is so inclined.  Rescinding measures aimed at Russian intelligence operations in the United States is a non-starter domestically. Lifting personal sanctions against high-ranking GRU officers is not in the cards. The release of the Joint Analysis Report will continue to erode Russia’s capabilities as more and more entities here and abroad take the necessary steps to tighten their cybersecurity.

Moreover, the Administration’s actions reveal the depth of antagonism that has emerged between the American intelligence services and their Russian counterpart. That should alert Trump, if he is not already aware, to the formidable challenges to counterterrorism cooperation with Russia in Syria and elsewhere, which depends to a great degree on the rival services’ developing enough trust to share intelligence and otherwise operate together effectively. On this and other matters, Trump will not find an easy path to the more constructive US-Russian relations he says he wants.

So what might he do once he takes over to defuse tensions with Russia? Although conditions are radically worse now, it is worth remembering that the George W. Bush Administration started with a spy war, as the United States expelled dozens of Russian diplomats and Moscow reciprocated. A few months later, however, Presidents Bush and Putin meet in Slovenia and put relations on a sounder footing that produced positive results for the United States, at least during Bush’s first term. This time, no such reversal of relations should be expected—nor perhaps desired—but this present show of toughness by the United States could have a cathartic effect, persuading Moscow that it should sit down with us to work out norms of behavior in cyberspace and giving us the confidence that we can do that from a position of strength and not of weakness.  Such talks could be broadened to include discussion of the limits of acceptable interference in each other's domestic affairs, given the inevitability of such activity in a globalized world. The results would be limited. No one should be deluded that the negotiations would be easy or concluded early. But they could help prevent a dangerous spiral of confrontation in the months ahead.

In addition, to take the edge off of what are unadulterated anti-Russian steps at the moment, a Trump Administration could broaden the investigation of hacking in the recent elections.   Russia is not the only rival capable of breaching the security of our cyber systems and disclosing information to disrupt our domestic political processes. China, Iran, and North Korea are certainly on the list. ISIS and other non-state actors might be as well. Even if we are most concerned about Russia, the focus should be on ensuring the integrity of our electoral system, the foundation of our democracy, from all potential hostile state and non-state actors. That will require a thorough investigation of our vulnerabilities and a concerted effort to enhance our cybersecurity, including better education of our public about the threats and challenges in the years ahead.

Obama’s sanctions are perhaps a fitting closing to the third cycle of great expectations and deep disappointment that have characterized U.S.-Russian relations since the end of the Cold War. For the incoming Trump Administration, the task is to find a way to defuse tensions consistent with American interests and purpose without embarking on a fourth cycle. Working through the intricacies of relations in the cyber age might be a good place to start. In any event, the Obama Administration has left the new administration with little choice.