A Russian Pivot to Asia? 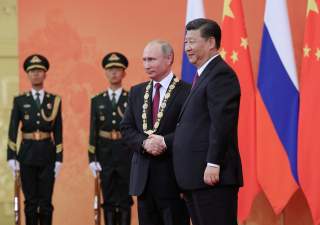 In recent years, Russia has been going through quite challenging times. Economic slowdown, a collapse in oil prices and Western sanctions which have deprived Moscow of cheap money and technologies—all of these have pushed the Kremlin’s strategists to concentrate on import substitution policy, the reorganization of import supply chains, decreasing dependency on oil exports and pushing for the country’s pivot towards Asia.

In Moscow’s view, Asia is a rapidly growing alternative to the current Western-centric system of international economic and political relations. Moreover, the Kremlin sees that this system does not reflect today’s economic and political realities. This is why Russia started to invest a great deal of time and effort in building and developing lasting relations based on mutual respect and interests with partners in Asia.

With Moscow’s recent “obsession” with the turning to the Asia-Pacific region, there are still doubts if it can so at the expense of its Western partners. However, it seems that Moscow is trying to sit on two chairs. The Kremlin can’t afford to alienate Europe completely because it is Russia’s major economic partner (with over 40 percent of trade) and provider of technologies. At the same time, Russia is building and developing bridges with Asia, looking for new partners and markets that could potentially diversify its current economic activities.

Since 2015, Russia has been organizing a clone of the St. Petersburg International Economic Forum (SPIEF) in the country’s Far East—the Eastern Economic Forum (EEF)—which aims at opening new opportunities for Russian companies in the east and for Asian businesses in Russia. If one were to compare these two major economic venues, it is clear which one is becoming more important. It is enough just to look at the high-profile guests of both forums. In 2018, leaders of China, Japan, South Korea and Mongolia took part in the EEF, while the SPIEF was attended only by French president Emmanuel Macron and Japanese prime minister Shinzo Abe. Contracts signed during the last EEF amounted to over $46 billion, while the SPIEF gathered contracts worth $38 billion.

The Demand for Petrochemicals

In Russia, chemical products account for 4.4 percent ($19 billion) of all exports. The industry’s goods are the third most exported from the country after minerals and metals. And it seems that the country’s industry wants to grow its capacities.

Seyfeddin Roustamov, a businessman who controls Metafrax, one of the top three producers of synthetic resins in Europe and the largest producer and exporter of methanol in Russia, said that his company is planning to invest more than 950 million euros ($1.1 billion) in construction of a chemical complex construction in Gubakha, located in the region of Perm. The facility is planned to produce up to 575,000 tons of carbamide, 308,000 tons of ammonia and 41,000 tons of melamine per year. The project is the company’s biggest investment in decades.

In October 2017, Metafrax signed a contract worth 388 million euros ($447 million) with Swiss Casale SA (the world leader in creating and licensing its own technologies in production of ammonia, methanol, carbamide and melamine), which will provide services for project documentation, technological know-hows, equipment set-up, and construction management. Such cooperation confirms the dependency of Russian producers of European suppliers of technologies and licenses.

That said, 40 percent of Metafrax’s revenue comes from exports to the UK, Finland, Austria, Germany, Switzerland and others. European countries are the biggest consumers of the company’s products.

In February 2018, Roustamov’s company established SamyangMeta—a joint venture with Korean Sunghong Co., Ltd. to boost its outreach to the Asia-Pacific. Interestingly, Metafrax also hopes to deliver its products to the European market through this joint venture. It looks increasingly like an attempt to find alternative ways to increase its presence in Europe.

Nevertheless, Moscow’s attempts to expand to the Asian markets in its quest to diversify its choice of economic partners is, in fact, a quite rational policy given the prospects of Asian market growth.

However, this endeavor, though very attractive, seems to be challenging. Despite the fact that the Russian economy has been dealing quite successfully with the economic challenges it faces, it still lacks the structural reforms needed to sustain the country’s long-term economic development. The “pivot to Asia” policy cannot resolve all Russia’s economic problems alone, nor will it smooth Moscow’s confrontation with the West. This is why the Kremlin shall not develop ties with Asia at the expense of its relations with Europe. It needs to find a healthy balance which will allow Russia to develop successfully while taking advantage from both worlds.

Alexey Khlebnikov is a MENA expert in the Russian International Affairs Council. He is a consultant on the MENA region and Russian policy and strategy there with private clients and NGOs.