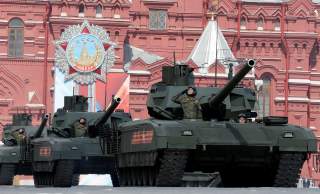 With all of the trouble Moscow is causing in Europe, the Middle East, arms control and cyberspace, it’s no surprise that its equally worrisome activities in Africa don’t get a lot of ink.

Many of Moscow’s moves in Africa reflect Russia’s resurgent foreign policy under President Vladimir Putin and his desire to return his country to great-power status.

First, there’s the global political calculation. Africa represents some 25 percent of the world’s countries. Russia certainly wouldn’t be the first party (e.g., China) to try to create a political power bloc out of its disparate nations to help support Moscow’s national interests in the United Nations and other international institutions.

Competing with both the East (e.g., China and India) and the West (e.g., America and Europe) in Africa, Russia appears bent on becoming a powerful political player on the vast, strategic continent.

But it’s not just politics.

As a major global energy player, Russia clearly has an economic interest in African energy issues. For Russia, African energy producers are both competitors in the oil and natural gas fields, and potential partners in building nuclear power plants.

The same is true for important commodities such as diamonds, which are produced uniquely and/or abundantly in Africa.

In the political and economic arenas, American diplomats and businesspeople can compete well with their Russian counterparts in Africa. But from an U.S. national interest perspective, Russia’s security engagement on the continent is disconcerting.

Of course, Russia has sold arms to, and trained, the security services of African states for many years, perhaps most notably of late in the Central African Republic. It has UN peacekeepers in Africa—not to mention counterterrorism interests there, too.

But that’s not all.

Russia may be on its way to establishing a naval base in Sudan, which sits along the western shore of the strategic Red Sea waterway. The two nations reportedly have inked a draft port access agreement for naval ships.

According to the head of the Sudanese parliament’s defense committee, Maj. Gen. Al-Hadi Adam: The date of the requested [Russian] port call is being discussed. It will be approved if the two countries make an agreement. This deal will pave the way for more agreements and greater cooperation . . . possibly a Russian base on the Red Sea.”

As far back as November 2017, Sudanese president Omar al-Bashir has been talking with Putin about increasing military ties, protection from U.S. aggression, and he has reportedly spoken of a Russian base in Sudan.

To this, add news last fall that Russia is looking at establishing a logistics base in Eritrea, which also sits on the banks of the Red Sea (to the south of Sudan) and near the Bab el-Mandeb Strait that leads to the Horn of Africa and the Arabian Sea.

While Russian and Eritrean officials haven’t said much about the base’s purpose beyond trade and development, foreign military facilities aren’t unheard of in Eritrea. Asmara allowed the United Arab Emirates to establish a naval and air base there.

Also troubling is Russia’s interest in Libya, a country caught up in a civil war. While Libyan energy issues are of interest to Moscow, there are concerns Russia might also be interested in military bases in Libya, which is strategically positioned in North Africa along the Mediterranean Sea.

The question is: “So what?”

Well, picture this: Through diplomatic agreements, Russian puts a limited number of bases—even civilian and/or military facilities that are just lightly manned and equipped but capable of being quickly augmented—in Sudan, Eritrea and Libya.

Bases in Sudan and Eritrea would potentially allow Moscow to collect intelligence on, and interfere with, shipping through the Red Sea between the Mediterranean and the Arabian Seas.  This would include U.S. warships sailing to, or from, the Persian Gulf and Indian Ocean.

Of course, not all of the deals that politicians propose are concluded or brought to fruition due to a variety of reasons—from the financial to the cultural; indeed, there may never be a Russian military bases in Sudan and Eritrea—or Libya.

But just the possibility of these developments—even if nascent—is unnerving, considering the strategic importance of the Mediterranean and the Red Seas to American national interests and those of our allies and partners.

Russia is a problem for the United States in a lot of places and on a lot of issues. Now, unfortunately, it must add Africa to that increasingly lengthy list.