Russia's Avoiding Its ISIS Problems, Not Solving Them 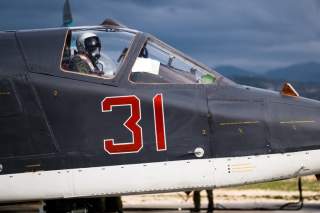 For Russia, ignoring ISIS abroad will eventually have domestic consequences. Vladimir Putin has made Russia a key actor in Syria—and his policies there, which involve using Russia’s military might primarily against Bashar al-Assad’s moderate opposition and not against ISIS, leave Russia exposed to a bigger enemy down the road. And this one’s heading for Moscow, not just Damascus.

Putin is no stranger to dealing with terrorism in Russia. His ascension to the presidency began with an act of terror that claimed over three hundred lives in a series of Moscow apartment bombings in September 1999, setting into the motion Russia’s controversial invasion of Chechnya and Boris Yeltsin’s subsequent resignation. As a result of strong-arm counterterrorism tactics and his flattening of Grozny, Putin replaced Yeltsin as the head of the country.

Chechnya still captures the headlines today. Many Americans recognize the North Caucasus republic as a result of the 2013 Boston Marathon bombing, orchestrated by the ethnically Chechen Tsarnaev brothers. Akhmed Chatayev, the apparent mastermind behind the recent Istanbul Atatürk Airport terrorist attack, also participated the in the two Russo-Chechen wars of the 1990s. Before traveling to Syria to join ISIS, he spent time in Ukraine and Georgia.

Chatayev’s trajectory of moving away from the Russian homeland is important. Whether due to the rigor of Russian security forces, or the assessment that the Caucasus is currently less fertile ground to wage a war against the state than unstable Syria, Chatayev and other Eurasian fighters traveling south lure Moscow into a false sense of safety. From 2012 to 2013, Russia witnessed a 30 percent drop in terrorist attacks. The following year, as Putin reportedly opened borders to allow for an exodus of radicals before the Sochi Olympics and ISIS declared a caliphate in the Middle East, attacks decreased by half again.

Because the terrorist threat is now increasingly outside of Russia’s borders, Putin devalues ISIS as a danger to Russian security. Yet Putin did not solve Russia’s Islamic extremist problem—he simply pushed it abroad.

Putin continues to use airstrikes in Syria to strengthen Assad’s regime at the expense of U.S.-backed rebel forces fighting ISIS. Only ten out of approximately fifty-three Russian strikes in the past month targeted ISIS-controlled territory. When confronted about Russian jet attacks on U.S.-supported opposition fighters in southern Syria, Brett McGurk, the U.S. Special Presidential Envoy for the Global Coalition to Counter ISIL, said Russian explanations “lack[ed] merit.” He concluded that “the episode once again called into question Russian intentions in Syria.” Actually, Putin’s intentions are clear: keeping Assad’s regime from defeat comes before countering terrorism.

In the short term, Putin’s actions in Syria may result in some tangible payoffs. Clawing himself back from 2014 post-Crimea annexation isolation, the Russian leader has regained a seat at the global decision-making table, challenged what he views as the Western agenda of inference in the sovereignty of others, and diverted attention from a deteriorating domestic economy.

Most of the Russian public greets each act of insolence towards the West with a surge of nationalism, allowing Putin to maintain public support even in the face of a declining economy. Yet sacrificing pensions and healthcare for the military spending will not sustain this backing forever. Even the untouchable dense budget is suffering, with the 2016 federal budget predicting the lowest increase in military spending increase in the past five years.

However, these short-term payoffs do not translate into a long-term strategy. Against terrorism, Moscow’s decision to militarily intervene in Syria was not a calculated move in a grand Middle East plan, but a rushed attempt based on the realization that Assad was losing ground. As Assad’s regime gained confidence in March, Putin decreased Russian forces despite the large amount of Syrian territory still occupied by ISIS. In doing so, Putin fails to consider the long-term threat of ISIS to the region and the world, including Mother Russia.

ISIS is not a rebel group whose ambitions are limited to the Middle East, and Russia should stop treating it as such. Unlike the Syrian opposition groups facing Russian artillery, ISIS has a global reach, and without international cooperation it will only grow. As ISIS’s territorial caliphate in Syria and Iraq shrinks, it will rely on global terrorist attacks and lone wolf actions to generate a secondary source of momentum.

Russia is not immune to this momentum. As many as 3,500 Russians, and two to four thousand Central Asians, have traveled to the Middle East to join terrorist organizations. Due to mandatory military service during the Soviet Union era and active skirmishes in the Caucasus, these fighters are experienced and often serve in positions of leadership in ISIS. For Putin, this isn’t necessarily a bad thing—it lures some extremists away from Russia and contributes to the country’s decline in terrorist attacks. Yet as ISIS loses territory, the role of Russian speakers is changing. Before the attack in Istanbul, perpetrated by Dagestani, Kyrgyz and Uzbek bombers, Russian speakers did not typically participate in suicide operations away from ISIS-controlled territory.

This shift from local to global roles should worry Moscow. Domestic grievances propelled many of these post-Soviet fighters to go abroad. As these fighters are encouraged to look overseas or return home instead of traveling to the Middle East, those same grievances will be there to greet them. Unresolved tension from the past decades of war with Moscow and crackdowns on nonviolent Salafis may direct those grievances towards the Kremlin. As Ekaterina Sokirianskaia, project director for Russia and the North Caucasus at the International Crisis Group, explained, “The desire to avenge perceived humiliation, or the experience of war atrocities at home, is also a powerful recruitment factor, and is especially strong among diaspora Chechens.” For young Muslims who grew up in the North Caucasus, ISIS represents an escape from the current kleptocracy, authoritarianism and economic stagnation at home.

Returning fighters will be welcomed by the new Islamic State governorate, Wilayat Qawqaz. Spanning Dagestan, Chechnya, Ingushetia and other North Caucasus provinces, this June 2015–established governorate indicates a change in strategy for Russian militant extremists. By abandoning the Caucasian Emirate, a jihadist organization with Al Qaeda ties founded by Chechen separatists in 2007, Wilayat Qawqaz followers acknowledged that gaining access to ISIS’s networks and supplies is the best way to fulfill their goal of bringing sharia law to the region.

Putin pushed his extremist problems abroad and now acts as if ISIS is somebody else’s problem. As ISIS changes from an outlet to domestic problems to a means to solve those problems, it is in Russia’s national security interests to genuinely cooperate with the anti-ISIS coalition in Syria.

In a public address to French president François Hollande following the Nice terrorist attack, Putin said, “I would like to stress again that only through a united effort can we defeat terrorism.” You are correct, President Putin. Only with a unified global response, which includes your military, will ISIS stop haunting Russia’s rearview mirror.