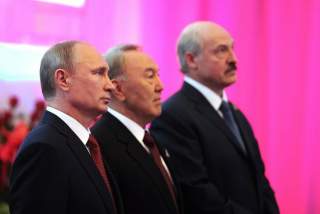 Russian president Vladimir Putin, along with his counterparts from Kazakhstan and Belarus, signed the treaty formally creating the Eurasian Economic Union recently in Astana. The assessment of many Western analysts has been predictably negative, with most decrying the effort as a vanity project, noting the weakness of the Union's market and institutions, and questioning whether this union will have much staying power.

These are fair criticisms. Other efforts to knit the post-Soviet states back together have also not amounted to much, starting with the Commonwealth of Independent States. Still, we should be less dismissive of Putin's approach to international institution building. Two other post–Cold War creations—the Shanghai Cooperation Organization (SCO) and the BRICS forum—were likewise dismissed as irrelevant, meaningless efforts at their times of creation—yet, over the past several years, both of them have acquired greater depth and salience.

The SCO was a product of efforts in the 1990s to finally and definitely resolve the border disputes between China and the successor states of the Soviet Union. When that process was completed, both Moscow and Beijing realized that the possibility for rivalry between them in Central Asia, plus the shared interests of all the states of the region in beating back challenges to the political status quo—particularly the threat of violent insurgencies against the existing authoritarian rulers—created a need for some sort of ongoing forum to continue the high-level contacts that had been forged during the negotiations over the final disposition of the frontiers. Worries about the ability of the United States to project its power deep into the Eurasian heartland also helped to bring together Putin and Chinese President Jiang Zemin to move ahead with the transformation of the more informal Shanghai dialogue into an actual international organization in 2001.

Reflecting Putin's cautious, step-by-step approach to institution building, the SCO did not set overly ambitious goals for itself. It initially concentrated on providing technical assistance in the area of antiterrorism and counterinsurgency for its member-states, and only slowly expanded its repertoire and its reach. It explicitly avoided any hint of being a formal military alliance that would obligate its members to any mutual-defense commitments—but, over the years, has steadily allowed for closer security cooperation—including ever-increasing joint military exercises between Russia and China. The SCO's "low-key" approach has also allowed for its expansion: beyond the original members, it has expanded its range by bringing in "observers" and "dialogue partners" to include most of the major powers of greater Eurasia—including India, Pakistan, Iran and Turkey. It is also laying the foundations for an alternate Russo-Chinese vision of a new Silk Road that would compete with the preferred Western Silk Road approach—one which would tie western Eurasia to the Far East, rather than acting as a way to pull Central Asia into a closer connection with the Euro-Atlantic world. The SCO certainly does not yet rival the reach and capabilities of the North Atlantic Treaty Organization, but it has reached a certain level of institutional permanence where the "SCO, like NATO, can hold meetings, formulate policies, exchange mutual assistance, and focus its cooperative efforts."

Similarly, the BRICS forum—which did not even exist a decade ago—and which drew its initial inspiration from a Goldman Sachs research paper—has acquired a certain salience since the first formal summit held in Yekaterinburg in 2009—echoing an SCO summit held at the same time. The ambitions were likewise limited—this was not a grandiose anti-American alliance but a more modest effort to coordinate the positions of the rising powers (Brazil, Russia, China, India and now South Africa) to present a more united front in international bodies like the United Nations, the G20 and the IMF—and to counterbalance the traditional dominance of the Euro-Atlantic countries. Its greatest success has come because its members, who may disagree on a variety of policies, are united by the desire to gain greater influence in world affairs.

From the U.S. perspective, both the SCO and BRICS are much weaker institutions compared especially with the established entities of the Euro-Atlantic world—particularly NATO and the European Union. But Washington should not take particular comfort in that fact. The U.S. effort to create lasting, sustainable post–Cold War institutions has not fared particularly well. The Community of Democracies (and its related Democracy Caucus in the United Nations) has not been a particularly powerful or influential bloc, and consistent U.S. proposals for a League of Democracies or a global NATO have resonated with neither existing U.S. allies in East Asia and Western Europe, nor with the rising powers of the global South. India's new prime minister Narendra Modi will have much more structured interaction with Vladimir Putin—first, at the upcoming BRICS summit in Brazil this summer, and then at the next Shanghai Cooperation Organization meeting—than he will with President Barack Obama. The SCO and BRICS may not come close to emulating the European Union and NATO, but they are inculcating and reinforcing habits of cooperation among their members that, over time, could become the foundations for more serious economic and security cooperation.

Will the Eurasian Union follow along this path? Kazakhstan's president Nursultan Nazarbayev may have saved Putin's Eurasian Union dream, because his negotiators pushed hard to strip many of the more grandiose provisions for closer political coordination out of the final treaty; they did this in favor of keeping the Eurasian Union focused more narrowly on trade and business—areas where there is much more room for productive cooperation.

The SCO, BRICS, and now the Eurasian Union are, as Chris Marsh and I concluded, a reflection of a "new, flexible, and dynamic approach on the part of Russian foreign policy, seeking to maximize Russia's influence on the world stage. . . .the effort is underway to hitch Russia's chariot to the energy and dynamism of the rising powers as a way of retaining Russia's relevance as a global player." It is a process that we ought to take much more seriously.

Nikolas K. Gvosdev, a contributing editor to The National Interest, is the coauthor of the recently-released Russian Foreign Policy: Interests, Vectors and Sectors.