Russia's Grand Plan to Gain Power In the Shadow of U.S. Sanctions 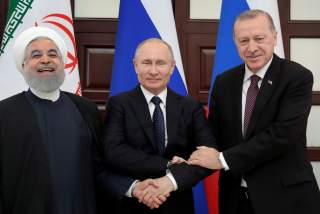 The expiration of U.S. sanctions waivers for buyers of Iranian oil exemplifies how difficult it is today, even for the United States, to achieve foreign-policy goals without significant loses. Russia is in a prime position to deliver the oil removed from markets because of U.S. sanctions against Iran, which will result in development of cooperation between Moscow and countries important to American foreign policy. Thus, Russia will gain new leverage against the United States.

During the last few decades the narrative of the oil’s role in international affairs has changed several times. It has gone from “peak oil” to “energy weapon,” and from autocrats using oil as leverage against the West to a post–oil world of democracy and sustainability. From among these concepts one of the most stable was the idea that interests and goals of producers and consumers differ. The situation around the U.S. sanctions against Iran shows how limited this idea is.

Last Friday President Donald Trump told reporters that he asked the Organization of the Petroleum Exporting Companies (OPEC) “to bring down” the price of oil. A way to do this for the cartel is to increase production. In theory, one can assume that oil-producing countries, OPEC members, will not be eager to decrease prices, and thus, lower their profits. However, in reality, experts expect that the global supply will be stable. Oil exporters will protect importers from a price hike.

One of the reasons for this is the fact that the cartel is dominated by Saudi Arabia which needs additional export revenues and is not interested in a conflict with Donald Trump. Additionally, and no less importantly, Russia is ready to increase its export. Despite cooperating with Iran on many issues, Russia has a good chance to grab a significant part of Iranian market share. Any increase in sales of Russian oil will soften the blow of U.S. sanctions on global oil markets. This indirectly supports U.S. foreign policy, hardly a goal for the Kremlin.

Whatever the state of relations between Moscow and Washington, Russia will contribute to easing the impact of Iranian oil removal from global markets. Economically, Russian producers and the state budget need new revenues. One can hardly predict a significant rise of oil prices, therefore any producer trying to keep revenue stable seeks to increase export satisfying the growing global demand, especially in Asia. Politically, Russia is also well positioned to win even in terms of the showdown with the United States. Among the buyers of Iranian oil there are countries, mostly in Asia, important to U.S. foreign policy. By developing energy cooperation with them, Moscow gets an opportunity to deepen bilateral partnerships with these states on issues that are important to Washington, such as issues tied to North Korea or Afghanistan.

What will be the impact on Russian-Iranian relations? The Iranian leadership has promised to counter U.S. sanctions with international support. In reality, whatever the international attitude toward the firm Trump administration policy on Iran, there are not many actors positioned to help the Islamic Republic. Europe, despite already non tacit critique of Trump and his policies, is yet to make any actual moves against the United States. The cost of any such action is bigger than the potential benefits. Arguably, the same is correct for China: among many disputes with the United States the issue of Iranian oil is hardly number one worth escalation. Russia might very well be the only player willing and able to help Iran while undercutting the market positions lost due to U.S. sanctions. For example, Russia may be interested in buying Iranian oil. The conflict in Syria has proved that Moscow and Tehran do not have to absolutely agree on everything to act together in a significant way.

According to some estimates, Russia can earn additional billions thanks to U.S. sanctions against Iran. Political benefits are hardly less important. The U.S. waivers expired for China, South Korea, and Japan. The Russian oil export that supplements Iranian oil for these three countries fortifies their already existing energy partnership with Russia. At one point political cooperation will become an integral part of this partnership. If Russian supplies are essential to the energy security of these countries, then political understanding on various issues might not be a difficult thing to achieve. Japanese companies appear satisfied with how their cooperation with their Russian counterparts has been developing. Beijing is interested in increasing of volumes of Russian gas export via pipeline “Power of Siberia.” South Korea might benefit enormously if the easing of tensions around North Korea allows it to revive existing plans to build a pipeline for Russian gas through North Korean territory. Against the removal of Iran from world energy markets, Russia seems to be the far more stable partner.

Other countries which enjoyed U.S. waivers for some time can also develop their political partnerships with Russia based on increased energy cooperation. Indian leadership is hardly satisfied with U.S. sanctions against Iran messing with Indian energy security. And this is happening at a time when Washington might need India’s support on a possible settlement in Afghanistan. Turkey, Italy, and Greece already hardly belong to the countries providing the United States with full support in its effort to contain Russia. Energy cooperation is among the main reasons for that pushback.

One should not rush to accuse the Trump administration of playing into Russia’s hands with the sanctions against the Islamic Republic. Rather, anyone can see that almost any serious move, even by leading actors in today’s international relations, comes with consequences that can reduce effectiveness of foreign policy of this actor on other issues. President Trump decisively conducts the campaign of pressure against Iran and such campaign leads to complications for the United States elsewhere. In terms of the current U.S.-Russian showdown, it is worth remembering that despite the very significant economic advantage, the United States is still unable to remove Russia from the world economy. It might be possible for the United States to do that to Iran, but not Russia. In fact, the current attempt to achieve this with the Islamic Republic shows this difference in a very remarkable way.