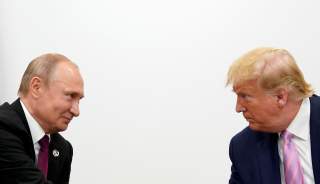 As the impeachment trial of President Donald Trump comes to an end, Russia looks to what comes next with pessimism.

Just months after Special Counsel Robert Mueller finished his investigation into whether the Trump campaign colluded with Russia, Moscow found itself at the center of another political controversy that enveloped Washington. This time it was over Trump’s decision to temporarily halt military aid to Ukraine, a move which critics assert was politically motivated and emboldened Russia.

Although Trump is likely to be acquitted by the Republican-controlled Senate, the Russian politicians and experts interviewed by the National Interest expect tensions between Moscow and Washington to remain high. They argued that rather than benefiting Russia, the fierce partisan divisions exhibited during the impeachment battle made improving relations with the United States impossible and forced the Kremlin to draw uncomfortably close to China.

Moscow has sympathized with Trump’s plight throughout the month-long impeachment saga. In December, Russian president Vladimir Putin publicly dismissed the charges against Trump as “far-fetched” and argued that the Democrats were pushing impeachment to avenge their defeat in the 2016 election.

“This is just another move in that country’s domestic political campaigning, where one party that lost the election, the Democratic Party, is trying to achieve results they want through other means,” Putin said.

Yet despite such statements of commiseration, few in Moscow regard Trump’s predicted survival as a victory. The Russian political elite concluded long ago that Trump lacks the desire or ability to improve relations with Russia, explained Fyodor Lukyanov, editor-in-chief of Russia in Global Affairs magazine.

“Trump may be interested in Putin as a personality, but Russia itself doesn’t appear to figure very prominently in his thinking,” he said. “It seems that Trump thinks that a country of Russia’s economic stature should not take too much time away from the president of the United States."

Lukyanov called 2020 a “lost year” for U.S.-Russian relations. Few in Moscow expect Trump to make any major overtures to Putin given that he just survived impeachment and is headed into an election where any signs of friendliness toward the Kremlin will almost certainly be used against him, Lukyanov told the National Interest.

Although Trump’s dealings with Ukraine are the genesis for the impeachment proceedings against him, congressional Democrats have not hidden the fact that their real focus is Russia. Speaker of the House Nancy Pelosi (D-Calif.) told reporters as much in December.

“All roads lead to Putin. Understand that,” Pelosi added.

House Impeachment Manager Adam Schiff (D-Calif.) went one step further. In his opening statement at the impeachment trial, Schiff declared, “The United States aids Ukraine and her people so that we can fight Russia over there and we don't have to fight Russia here.”

Lukyanov said that Russian political elites have reacted to their country being back in the spotlight in Washington with a combination of irony and despair.

“There’s a sense that dealing with the United States is currently pointless because irrational attitudes dominate [Washington] at the moment,” he said.

Many wondered in Washington whether Putin was secretly relishing the partisan divisions exposed by the impeachment process. The Russian experts interviewed by the National Interest, however, insisted that a dysfunctional United States is not in Moscow’s best interests.

“Amidst rising global instability, it would be nice to have a more stable and predictable partner, especially when that partner is still the leading economic and military superpower,” said Andranik Migranyan, an informal adviser to the Russian presidential administration and professor at the Moscow State Institute of International Relations.

Migranyan added that the polarization of American politics had the inevitable result of rallying both parties to adopt a tougher stance against Russia because neither side wanted to be accused of being too soft on the Kremlin.

That concern is shared by Konstantin Zatulin, a senior Russian lawmaker who serves as deputy chairman of the State Duma’s committee for relations with the CIS and Russians nationals abroad. He told the National Interest that many in Moscow feared that political tension in Washington could help spark a dangerous escalation between the United States and Russia.

“We could, of course, go with the conventional approach that what's bad for our adversary is good for us, but even if we adopt that framework, we must understand that there are certain red lines that must not be crossed—red lines that were respected even during the most heated days of the Cold War,” he said.

“We don't get the impression that the current representatives of the government and the opposition [in the United States] grasp this reality,” Zatulin added. “They belong to a post-Cold War generation which believes that nothing really bad can actually happen."

“I like China, but I absolutely do not want to be its junior partner,” he said. “Yet what America is doing is pushing us to look for solutions only in that direction.”

So, what is next for Moscow and Washington? Even after the impeachment saga and the 2020 U.S. elections are over, the prospects for improved U.S.-Russia relations are slim, argued Dmitry Suslov, a professor at the National Research University Higher School of Economics.

Suslov told the National Interest that American politics are too polarized for diplomatic outreach from either side to produce results. Until that reality changes, Suslov predicts that Russia will try to keep its relationship with Washington “at a distance” to avoid engaging with Washington any issue other than arms control and deconfliction.

“In the context of the current polarization and political battles raging on in Washington, anything Russia does in regards to the United States will only bring negative results,” Suslov said. “It is necessary for us to minimize relations with the United States, to bring them to some minimally acceptable level and not to expect anything more."