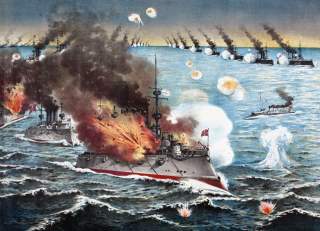 At midnight the Russian fleet slept.

A few minutes after the clock struck 12 a.m. on February 9, 1904, Tsarist Russia's Pacific squadron peacefully bobbed at anchor at the Russian naval base nestled in the Manchurian town of Port Arthur. Ashore, the mood that night was festive as the garrison's army and naval officers availed themselves of refreshments at a birthday party for the admiral's wife.

Soon their revelry was disturbed by flashes in the night and the dull thud of torpedoes slamming into metal hulls. Some thought it was fireworks in honor of the admiral's wife. In reality, it was Japan announcing the beginning of the Russo-Japanese War with a surprise attack on the Russian fleet at Port Arthur.

The drunken partygoers should not have been so surprised. Russia and Japan had long been on a collision course over who would control the plentiful resources of Manchuria, and ultimately the Far East as well. With the new Trans-Siberian Railroad linking Moscow to the Siberian port of Vladivostok, and having forced a feeble China to cede Port Arthur in 1895, Russia had asserted its ambitions to become the dominant power in the region.

Unfortunately, Japan had the same idea. Just fifty years before, the samurai had brandished their swords in impotent frustration at the American warships that dared to break Japan's feudal isolation by sailing into Tokyo Bay. But with astounding determination and energy, Japan had built a modern army and navy powerful enough to defeat the ailing Chinese Empire in 1894-95.

Could the bear and the tiger coexist? Negotiations had been underway since 1903 between St. Petersburg and Tokyo, with Japan offering to recognize Russian control of Manchuria if Russia recognized Japan's control of Korea. But Russia dismissed the Japanese as "monkeys" that merely aped their Western betters. If Japan dared attack, the Tsar's soldiers and sailors would smash them. Why should His Majesty deign to give these simians anything?

Disputes over who should dominate East Asia? Westerners dismissing Asian military prowess? Negotiations at an impasse? If you're an American, this should ring a bell.

As in 1941, Japanese leaders concluded that time was not on their side. Though the Tsarist empire was a textbook case of inefficiency, the Russian colossus was steadily building up its forces in the Far East. Deciding it was now or never, Japan opted to resolve the situation in its own inimitable way. It dispatched a squadron to strike Port Arthur, which based a formidable force that included seven early battleships and six cruisers. As Admiral Yamamoto did thirty-seven years later against Hawaii, the brilliant Japanese commander Admiral Togo took a bold gamble by sailing into the teeth of a Russian fortress protected by powerful coastal artillery.

In 1941, the diminutive killer of battleships was the airplane. In 1904, it was newfangled steam-propelled torpedoes launched by destroyers. Rather than risking his capital ships, Togo opted to send in ten destroyers to make a massed night torpedo attack against the anchored Russian vessels. At 10:30 p.m. on February 8th, the Japanese destroyers ran into a Russian ship, which fled to raise the alarm. But it was too late. At about 12:30 a.m., the Japanese flotilla launched a salvo of sixteen torpedoes. Only three hit their target, damaging the battleships Retvizan and Tsarevich, as well as the cruiser Pallada.

If battles were judged strictly by material results, the Japanese strike was not decisive. No ships were sunk, most of the Russian vessels were left intact, and when they sailed out of harbor later that day, an inconclusive skirmish ensued that damaged several ships on both sides before the Japanese withdrew.

Yet as Napoleon had said a century before, morale is three times more important than material. There are times when nations, like people, just start off on the wrong foot and never regain their balance. Such was Russia in the Russo-Japanese War, a giant that always seemed one step behind its opponent, crippled by cautious and plodding commanders fumbling to respond to Japanese moves instead of imposing their own will on the battlefield.

The opening act of the drama was the surprise attack on Port Arthur, which shocked Russia and impressed the world. "The Japanese Navy has opened the war by an act of daring which is destined to take a place of honor in naval annals," declared the Times of London, proud of a Japanese fleet that was the protege after the Royal Navy (which itself had sailed into Copenhagen in 1807 to destroy or capture the Danish Navy). The curtain came down on Russia on May 27, 1905, in the Straits of Tsushima between Japan and Korea: the Tsar's main battlefleet, which had sailed halfway around the world in an epic voyage from Europe to Asia, was demolished by the Japanese Navy. With Russia unable to sever the maritime lifeline bringing supplies and troops from Japan to Manchuria, the Japanese army was able to defeat the Russian field army and capture Port Arthur in January 1905 after a bloody siege. From 1905 to 1945, it would be Japan—not Russia—that was the dynamic, aggressive power in Asia.

The Russo-Japanese War was a stain on Russian military history, a humiliation that fatally weakened the Tsar's prestige. How ironic that the Bolshevik path to power was paved by Japanese bayonets. But if there is embarrassment for the surprise attack at Port Arthur, it isn't Russian. The Tsar's military was lax, but what Westerner in 1904 would have believed that mere Asians could—or would dare—to launch such an audacious assault on a major Western power?

Yet what was America's excuse at dawn on December 7, 1941? That Japan would strike first if cornered had been made clear thirty-seven years earlier. That it could strike with daring and skill had also been demonstrated. And most of all, that Japan would attack before notifying its enemies that it had declared war, should have been evident.

There was much finger-pointing after Pearl Harbor about the unpreparedness of the Pearl Harbor defenses, or how much early warning the U.S. had from breaking Japanese codes. Just as Russia might not have anticipated a destroyer attack on a fortified port, perhaps the U.S. military could be forgiven for not anticipating an unprecedented aerial tsunami from six aircraft carriers and four hundred planes.

Yet as the burning U.S. battleships slowly slipped beneath the waves, perhaps some white-haired ex-sailor of the Tsar's Navy rose from his rocking chair and muttered, "We told you so."

Image: A Russian ship being attacked during the Battle of Port Arthur. Public domain.