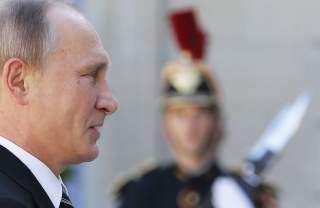 Last year Russians across the country protested against legislation that raised the retirement age from 55 to 60 for women and 60 to 65 for men, but President Vladimir Putin still signed the bill into law in October. In response to these pension changes, the president went from winning 77 percent of the vote in the March 2018 presidential election to having a 64 percent approval rating now. For many in the United States who only notice Russia when the old Cold War adversary meddles in elections or asserts itself in places like Ukraine or Syria, this commotion over domestic policy came as a surprise.

Fortunately, for those who don’t follow these issues regularly, Chris Miller—an assistant professor of international history at Tufts University—provides a superb review of Russia’s economic policies in Putinomics: Power and Money in Resurgent Russia. This book helps readers understand why Putin addressed pension policies and why citizens protested, and it also offers a slightly different perspective from writers who emphasize Russian kleptocracy. While affirming corruption is problematic, Miller strives to demonstrate how the country is much more complex as competent technocrats and corrupt oligarchs compete for influence. Those technocrats, according to Putinomics, prevented the country from collapsing economically and allowed Moscow to exert influence globally. Putin’s Russia still has numerous challenges today, but Miller argues the federation should be compared to fellow petrostate Venezuela since both were similar in the late 1990s. Venezuela even had a better credit rating and a higher per-capita income when Putin came to power. By this standard, “Putinomics” has been unexpectedly successful.

In order to understand Russia’s economic policies and what may happen next, Miller describes Putinomics’ three-pronged strategy that the Kremlin hopes will help the government maintain power, expand influence abroad, and develop the economy:

After the traumatic 1990s, Russian leaders and most of the public determined that these priorities made sense in order to maintain stability. Putinomics concludes that this strategy has ultimately worked, even if the country still struggles with corruption and low economic growth. Indeed, if Putin hadn’t achieved some economic success, then it’s unlikely either he or his cronies would still retain power today.

Whereas the socialist Venezuelan government spent extravagantly during its oil boom, Putin maintained power through conservative fiscal and monetary policies while avoiding the deficits and inflation that devastated Russia before. Miller explains how, instead of directing most new revenue from higher oil prices and increased tax collection to state employee salaries or corruption, the Kremlin followed technocrats’ guidance and paid off foreign debt, which lessened Russia’s reliance on other countries. Moscow also created a stabilization fund, which ensured the government had cash whenever oil and gas prices dropped, which happened during the Great Recession and America’s shale gas and oil boom. Such conservative fiscal policies were not universally popular, as various politicians demanded higher spending to address Russia’s problems in healthcare, education, and investment. But the people who would benefit from these programs weren’t part of Putin’s political coalition, whereas pensioners were.

While saving as much as possible, the Putin regime did use well-paid pensions to avoid popular discontent, even when investments in healthcare and education would boost long-term economic growth better. Around 93 percent of Russian retirees live off their pensions, and their costs strain the budget. Putin has used them as a political tool to remain in power, such as after urban voters in places like Moscow and St. Petersburg protested against vote rigging in the 2011 Duma elections. Instead of addressing those protestors’ concerns, Putin appealed to his base when he boosted spending on rural industrial workers, government employees, and pensioners. While the strategy worked since he won the 2012 presidential election, the increased spending created other enduring fiscal headaches. Readers should therefore understand last year’s pension changes, which occurred after Putinomics’ publication, as part of the president’s ongoing agenda to maintain Russia’s fiscal stability and prevent devastating crises reminiscent of the 1990s. Clearly, such stability is critical for Putin since he spent significant political capital on this legislation.

Miller convincingly argues that Putin’s economic policies successfully addressed concerns businesses had in the late 1990s. Yet today other issues like corruption, rule of law, business regulation, education, and healthcare are more important, and Russians have higher expectations than just mere stability. So long as Putin relies upon his current political coalition, Miller doubts Russia will enact reforms that lead to higher economic growth.

Overall, Putinomics is an essential book for anyone interested in Russia and foreign policy. As Russia has shown its willingness and ability to thwart American interests in places like Ukraine, Syria, and Venezuela, policymakers should understand why neither the country nor Putin’s regime has collapsed despite multiple crises, from recessions to sanctions. In this book, Miller provides a detailed and convincing account that non-specialists can understand and that should enrich Western understanding of the country.

Mark Melton is the deputy editor of Providence: A Journal of Christianity & American Foreign Policy. He earned his bachelor’s degree in Foreign Language & International Trade at Mississippi College and his master’s degree in International Relations at the University of St. Andrews.