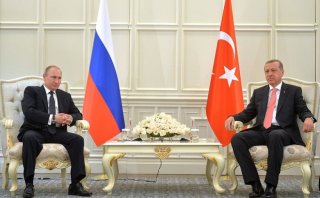 As the world’s leaders gathered for the COP 21 climate change summit in Paris, a more immediate and grave threat should have preoccupied their attention. Two regional powers, Russia and Turkey, have come to blows for the first time since the end of the Cold War. If not stopped, the conflict may careen out of control—and bury the efforts to defeat Islamic State/Daesh under the rubble. The chances of resolving the Syrian civil war would further diminish. There will be no winners.

The Russian Fencer was bombing a Turkmen Sunni anti-Assad militia supplied and protected by Ankara. The plane crossed a portion of Turkish territory that protrudes into Syria. It was in Turkish airspace for mere seconds. For the first time since the war in Korea, a NATO member shot down a Russian aircraft.

Following the downed Fencer, the ties between Turkey and Russia immediately went into a downward spiral. Contributing factors included Russia’s aggressive and excessive use of air assets in the Syrian “anti-terrorist” operation, with poor coordination with other parties. No matter what Moscow was targeting, there was no justification for repeatedly crossing into Turkish airspace.

Next, Russia ignored a series of red lights. Turkey repeatedly warned against repeated violations of its sovereign airspace. Ankara said that it would follow “military procedures.” Since October, it has played by the book: the Turkish Foreign Ministry called in the Russian ambassador, summoned the NATO Council and launched a complaint at the UN Security Council. Russia blamed bad weather, apologized and said that it would not happen again.

Finally, once the incident occurred, Moscow decided to escalate, as President Recep Tayyip Erdogan refused to apologize. The Kremlin, however, is now deliberately destroying over twenty years of what was a thriving relationship with the Russian Empire’s historic enemy. Between the sixteenth century and 1918, the Ottoman Porte and the Romanov Empire fought twelve wars, all but one lost by the “Sick Man of Europe.”

During the Cold War, Ankara was the pillar of the NATO alliance’s southern flank. After the collapse of the Soviet Union, Russia and Turkey have enjoyed a thriving relationship worth tens of billions of dollars. Turkey and Russia have a visa-free travel regime (which Moscow will be ending on January 1, 2016), and four million Russian tourists spend tens of billions of U.S. dollars at Turkish resorts each year.

Turkish companies have worked on lucrative construction projects in Russia. Russia has been supplying Turkey with 60% of natural gas, and Putin has launched “TurkStream,” a massive $30 billion project to supply 63 billion cubic meters of gas to Turkey and Europe. Rosatom is constructing a gigantic nuclear power project at Akkuyu worth $20 billion. Now, all of it—from tourists to tomatoes—is on life support.

In a war of words, Vladimir Putin accused Erdogan of “Islamization,” and Kremlin TV channels claimed that Erdogan's son was involved in trading oil with ISIS. (Erdogan has accused the Assad regime of the same.)

Putin decided to stay one step ahead of the game. He ordered the missile cruiser Moskva to Latakia’s coast. Its massive arsenal has Turkish and allied targets in its sights. Russia also moved its advanced, long-range S-400 Favorit SA-21 missiles to the Hmeimim air base, to threaten Turkish (and allied) air operations in Syria’s skies. This move, if unchecked by allied electronic warfare capabilities, could constrain Western air operations over Syria. The missiles’ 200-400 kilometer range covers all of the Eastern Mediterranean coast—200 kilometers into Turkey, and all the way down to Lebanon and Israel.

Since the war in Ukraine, NATO has continued to deter Russia along its eastern and northeastern borders. But on the southern tier, it is time for de-escalation: in the skies over Syria, and in Turkish-Russian relations.

Priorities for the Allies:

The Turkey-Russia clash is a massive distraction. Dealing with the threat from ISIS and searching for a comprehensive settlement in Syria should be the two parallel priorities. Unfortunately, Washington is lacking vision, leadership and toughness in pursuing them.

The main disagreement is about the nature of a future regime in Syria and the fate of Bashar al-Assad. Turkey denounces the Assad regime and its sponsors directly, accuses it of war crimes and demands its removal. The Sunni Arab countries, including Saudi Arabia and Qatar, are also vehemently opposed to Assad clinging to power indefinitely. Iran, on the other hand, is adamant in trying to save Assad, who provides Tehran a bridgehead in the Eastern Mediterranean and provides a supply channel to Hezbollah in Lebanon.

Escalation and armed conflict between NATO members and Russia over Syria are avoidable, preventable and not in the interest of the U.S. and the alliance. While the NATO-Russia Council has been suspended over Russian involvement in Ukraine, and Turkish-Russian military ties were severed in the aftermath of the downing of the bomber, NATO can build and coordinate its joint airspace control over Syria, whether virtual or “live,” to diminish the chances of further incidents. The U.S. and Russian militaries, and Russia and the Israel Defense Forces, have already put in place de-conflicting arrangements, including hotlines.

It is the duty of our leaders to aggressively prevent a dangerous escalation—but also to stand by a key ally. This includes an important political and law enforcement aspect. Western countries, including the U.S., can support President Erdogan by cooperating in an international investigation of the Fethullah Gülen movement, a global Islamic network which has penetrated the Turkish government, law enforcement, judiciary and business establishments. The Gülen movement, formerly a political ally of Erdogan, is now under investigation by the Turkish authorities, as well as by the FBI and the local law enforcement in the U.S. and other countries. Its cash-cow school networks, alleged buying of political influence and suspect immigration practices deserve a closer look by Western security and law enforcement services.

The Need for a Combined Strategy in the Levant:

The Obama administration needs to implement a strategy that it can convince most parties in the Syrian conflict to accept. It should include a parallel effort to destroy ISIS, and to transition to a post-Assad Syria. In such an arrangement the rights of Syrian minorities, including the Alawites, the Christians and the Kurds, must be fully protected. Federalization may be in order.

The U.S. must encourage Russia to behave responsibly, refrain from violations of Turkish airspace and cease escalation. Otherwise, NATO allies may have to consider further sanctions against Moscow.

Syria is a humanitarian disaster resulting in millions of refugees and IDPs, and threatening the Levant’s—and Europe’s—future. The U.S. must work with its allies, European and Sunni, to prevent the conflict from mushrooming into a regional war, and an even greater catastrophe.

Ariel Cohen, Ph.D., is a Senior Fellow at the Atlantic Council. He is also Director, Center for Energy, Natural Resources and Geopolitics (CENRG) at Institute for the Analysis of Global Security (IAGS). Dr. Cohen is the founding principal of International Market Analysis (www.imastrategy.com)