Russia's Syria Surprise (And What America Should Do about It) 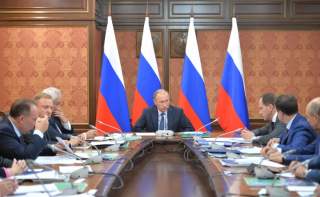 Russia’s ongoing military buildup in Syria poses a serious challenge to American policy in the region. What response will best advance American interests in Syria and, more broadly, in the Middle East? That depends in large part on what Russia hopes to achieve.

So far, most Western commentators have argued that geopolitical considerations are driving Russian policy. At a minimum, Moscow wants to bolster a beleaguered Syrian president, its one sure ally in the region; more boldly, it hopes to gain some geopolitical advantage out of the deepening chaos throughout the region, exacerbated by doubts among leading Arab states about America’s commitment to their security and its strategic acumen. There is some truth to that judgment, although Moscow likely sees its actions as more defensive than ambitious. Its efforts to sell arms to Arab States, especially major American partners such as Egypt and Saudi Arabia, speak of regional aspirations. But Moscow is now focused on deteriorating conditions in Syria, which it no longer believes will survive in its current borders. As the map of Syria and the surrounding region is redrawn, Moscow is ramping up its presence to ensure that its interests are taken into account in any geopolitical reckoning.

Moreover, in the short term, Moscow is almost certainly focused more on the threats than the opportunities. Putin has made it clear that his goal is to counter the growing threat of ISIS in part by defending Assad.

The threat from ISIS is real: Indeed, in April, Foreign Minister Lavrov called it “the main threat” to Russia today. The reasons are many. Russian authorities estimate the number of Russian citizens who have joined ISIS at as high as 2,000. Many have returned home, presumably some to commit acts of terrorism, a fear fed by the mounting turmoil surrounding the migration crisis and similar concerns in Europe. ISIS supporters have been uncovered across Russia, including in and around Moscow. Moreover, jihadis long active in the Russian North Caucasus are drawing closer to ISIS. This summer, key leaders of the Caucasus Emirate, an umbrella group for terrorists in the region, switched their loyalty from Al Qaeda to ISIS, and the latter declared the North Caucasus a wilayat, or one of its provinces. At the same, ISIS has been fostering links with extremist forces throughout the fragile states of Central Asia along Russia’s southern periphery.

Moscow argues that the Assad regime fields the only effective local force against ISIS. That is debatable; the Syrian military spends more time fighting moderate opposition forces than extremists. Closer to the truth is Moscow’s fear that the only realistic alternative to Assad at the moment is one or another extremist force. The moderate opposition is few in number, poorly trained and badly provisioned. In addition, Moscow has no confidence that U.S.-sponsored regime change will bring peace and stability or rally Syrians against extremists; rather, it sees only further turmoil as the consequence. Given the record in Iraq and Libya, that fear is hardly unfounded.

These concerns are of such dimensions that Putin is prepared to run significant political risks to support Assad against ISIS. Rallying public support is not a slam-dunk. Syria is not Crimea or eastern Ukraine. Russians have no special affinity for the region; many are old enough to be haunted by memories of the war in Afghanistan. If, as polls suggest, most Russians are opposed to sending Russian troops to fight into Ukraine, we can probably be sure they will be less supportive of sending troops to fight in Syria. And the Kremlin will find it much harder to conceal the casualties there than in Ukraine, if it ultimately decides to commit its forces to combat. At the same time, with the demands of the Ukraine crisis on the Russian military, it will be stretched to sustain operations in Syria. Given the risks, the buildup is not likely a cynical play to whip up patriotic fervor and bolster Putin's domestic rating; it is rather an effort to defend Russian national interests.

So how should the United States respond? Certainly, Secretary Kerry's warning to Lavrov that Russia’s actions could “escalate the conflict, lead to greater loss of innocent life, increase refugee flows and risk confrontation with the anti-ISIL Coalition operating in Syria” is inadequate. Pressure on allies to deny overflight clearance to Russian military cargo planes is ineffective since Russia has a choice of other routes. Rather, we need to prioritize our tasks so that we deal with the urgent while not sacrificing longer-term interests, and we need to consider how we could turn Russia’s actions to our advantage.

The immediate threat is ISIS and other extremist forces. We should test Putin's claim that he wants to build a multinational coalition against ISIS, something he will likely press when he speaks at the United Nations later this month. Russian pride will not allow Moscow to join a U.S.-led coalition, but we should be able to work in parallel, coordinating air strikes and other actions for maximum effect in degrading ISIS. We should also enhance intelligence cooperation against ISIS in the Middle East and beyond. We would find out soon enough if Moscow is serious about fighting ISIS. If it is, we can step up cooperation. If not, we can adjust accordingly. We lose little by trying.

Second, we need to work with Moscow on a political transition in Syria, no matter how frustrating that might be. The beginning point is accepting that no one can put Syria back together again. A set of autonomous enclaves will likely emerge, if ISIS can be defeated, with the borders of some eventually extending beyond current Syrian territory. One of them will be for the Alawites, now led by Assad. The political transition will not begin with his ouster, although the Alawites themselves will likely jettison him at some point in the process. With their ties to Assad, and their deeper relations with the Alawite/Syrian regime, Moscow will be a key player in setting the boundaries of the enclaves. We would increase our leverage with Moscow, if we were finally prepared to undertake a concerted effort to build a moderate opposition to Assad, regardless of how formidable a challenge that might now appear to be.

Finally, the geopolitical competition in the Middle East will continue. Russia will be a factor but far from the most important one. Iran is now exercising the strategic initiative, and will continue to do so with or without Russian support. Saudi Arabia, Turkey, Israel and Egypt—all American partners—will play a larger role than Russia in determining the contours of the new Middle East. And the United States’ influence in the Middle East exceeds Russia’s by orders of magnitude. Unlike Russia, we could play a decisive role in shaping the region’s future, if only we had a strategy. Putin's Russia is not the reason we lack one, but maybe its actions in Syria will finally persuade us to devise one.

Thomas Graham was the senior director for Russian on the National Security Council staff, 2004-2007.