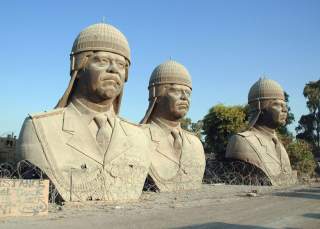 If the topic of Saddam Hussein’s Iraq comes up in Jordan, Jordanians will usually describe the late leader as a "dahiyyeh" (victim). In the collective mind of the Jordanian street, Hussein was both omnipotent and tragically sympathetic—the model for Arab development and governmental beneficence, while also the tragic hero of a Western plot. Nevertheless, it is impossible to understand Hussein’s lingering rosy legacy in Jordan without recognizing the intricate history between Ba‘athist Baghdad and the Hashemite Kingdom of Jordan.

Shortly after the Ba‘ath Party consolidated power within Iraq, the new Iraqi regime focused heavily on developing infrastructure and improving the education sector with generous funding from oil rents. In the late 1960s, the Iraqi government began nationalizing rents from then-British-owned Iraq Petroleum Company (IPC). By 1972, Iraq had fully nationalized the IPC and received an enormous windfall from oil revenues, using the money to achieve high levels of growth from 1970 to 1979. The oil rents helped make Iraq one of the most literate countries in the Arab world and furnished some of the best hospitals and universities in the Middle East for free. During this same period, Saddam Hussein slowly amassed exclusive control over the Ba‘athist regime as the head of the country’s intelligence service and became de jure leader of the country in 1979.

With turbulent oil markets during the 1970s, due to OPEC production controls in the West, Kuwait's pro-Western stance and enormous oil reserves essentially made the country subject to U.S. protection. Therefore, despite its high degree of political integration with the West, Jordan remained steadfast in its support of Hussein throughout the U.S. intervention against Hussein during the first Gulf War. For the most part, Jordanian support was due to Iraq’s enormously subsidized or free oil to Amman. The oil was one component, in addition to various other forms of economic assistance, that made Jordan dependent on Iraq’s largesse. The free oil continues to be one of the most commonly cited reasons for Hussein’s enduring support across Jordan.

When the United States attacked Iraq for the second time in 2003, Washington substantially redrew the map of the Middle East. Before the overthrow of the Ba‘athist regime, Iraq had been a majority-Shia country with lopsided sectarian leadership. Hussein's regime heavily favored his Sunni co-religionists at the expense of the Shia population. The American-backed regime turned the existing order on its head. Specifically, the Bush administration's ill-conceived de-Ba‘athification effort took many experienced Sunni bureaucrats, soldiers and intelligence operatives and rendered them unemployed. The results of this purge continue to be seen today in Iraq in the anti-Shia Islamic State’s popularity among disaffected former Ba‘athists.

The sectarian differences in Iraq are reflected by Shia Iran’s active role in Iraq and Sunni Jordan's unease with Shia governance in Iraq. From the start, the Jordanian monarchy was wary of Iran’s 1979 Islamic revolution, viewing the events as a harbinger of potential Islamist activism inside Jordan. Shortly after Iraq engaged in an ill-advised sneak attack against the newly formed Islamic Republic in Tehran, Jordan offered its ports for overland transfer of supplies to Baghdad as a show of support. Evidence of the tension between the current Shia-majority Iraqi government and Jordan can be found in recent incidents. For example, in May 2013, the Iraqi ambassador to Jordan criticized Saddam Hussein and irate audience members started shouting at him from the crowd; and in 2010, a popular movement attempted to rename a neighborhood in Jordan after Saddam Hussein.

In many ways, Saddam Hussein’s lingering popularity is reflective of the new zeitgeist in the Middle East, colored by the increased nostalgia and sectarianism brought by the Arab Spring around the Arab World.

Evan Heitkamp Boucher is a Johns Hopkins SAIS masters candidate in Middle East Studies (2015) and currently works at Global Risk Advisors in Washington DC. He recently returned from a Boren Fellowship in Jordan, where he researched the political economy of minority regimes.