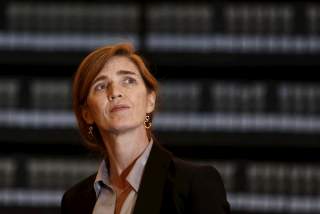 Samantha Power recently delivered a big speech in Sri Lanka. She was the keynote speaker at an event that celebrated Minister Mangala Samaraweera’s three decades in politics. Given Power’s track record, this is quite regrettable news.

During her time in government, a lot of her public remarks about Sri Lanka were wrong, misguided and insulting to reform-minded people in general and members of the Tamil community specifically. Many are sure to be disappointed with her most recent offering too. Power has gone out of her way to praise Samaraweera—the most prominent public advocate of a wide-ranging reform agenda that never really got going. After all, the coalition government performed terribly, didn’t take its own purported plan seriously and doesn’t even exist anymore. Power was involved with the Obama administration’s disastrous approach to Colombo—comprised of an unfortunate blend of carrots sans sticks, naivete and a total misreading of the realities on the ground.

Her keynote speech feels like 2015 and 2016 all over again. Power visited the island in November 2015. Some nice photos were taken, but U.S. policy didn’t change. In 2016, Power’s rhetoric went way too far. She even said that the country had “emerged as a global champion of human rights and democratic accountability.” Many other nations played along, of course. And since Donald Trump became president, America’s Sri Lanka policy hasn’t really changed. From a human rights and mass-atrocities perspective, there’s plenty to dislike about President Barack Obama’s time in office—including the conclusion of Sri Lanka’s civil war. And Power was there for virtually all of it.

Let’s talk optics and seating arrangements for the recent event. Power was seated on the same row as Samaraweera. To her right she had Prime Minister Ranil Wickremesinghe and then President Maithripala Sirisena. To Sirisena’s right sat Samaraweera. And to Samaraweera’s right sat none other than Rajapaksa—the man widely and credibly believed to have so much blood on his hands. It’s an image that truly captures the moment.

Her speech didn’t address the root causes of Sri Lanka’s ethnic conflict. It didn’t talk about the urgent need for wartime accountability. “My country and your country are facing turbulent times,” she said. There are reasons to be concerned about Trump’s presidency and the future trajectory of American politics. But Sri Lanka, widely cheered as the oldest democracy in Asia, recently experienced an attempted coup. Sirisena tried to install Rajapaksa as prime minister through illegal means. Thankfully, the coup attempt failed, though Rajapaksa and his supporters could still do quite well in forthcoming elections.

Power finished her speech by noting that “[w]e all know the best is yet to come.” Those who have suffered the most because of the ethnic conflict—Tamil civilians—probably don’t find those words to be very encouraging.

The coalition government didn’t do much to reach out to Tamils. Pervasive and unnecessary militarization—the military is almost exclusively Sinhalese—is still a major problem in the Northern and Eastern Provinces; that carries a host of extremely negative quality-of-life implications. Sirisena and Wickremesinghe have shown little interest in dealing with Tamil grievances related to Tamil political prisoners and the disappeared, among other matters.

More broadly, Sri Lanka’s supposed transitional justice roadmap has left a lot to be desired. Even the little that has happened has been done in a rather opaque fashion. And Colombo has resisted vital international assistance that would help make the process more credible. With the fortieth session of the UN Human Rights Council currently underway in Geneva, many will be reminded of how much the Sirisena-Wickremesinghe administration had promised it would do and how little actually happened.

In 2015, Sri Lanka made a range of commitments pertaining to human rights and transitional justice at the UN Human Rights Council. Two years later, Colombo asked for more time to implement those commitments and another resolution was passed on Sri Lanka with the government’s support. It now looks like Sri Lanka will cosponsor yet another resolution. But the UN Human Rights Council process is mostly about appearances, not substance. The truth is that transitional justice, like the broader reform agenda, has been on the rocks for some time.

Power is no longer the human-rights supporter that she claims to be. During Obama’s tenure, she was part of the problem regarding U.S.-Sri Lanka policy. Unfortunately, even with her being out of government, she is still a problem.

Taylor Dibbert is a freelance writer and an adjunct fellow at Pacific Forum. The views expressed here are his own. Follow him on Twitter @taylordibbert.